McCrory may need some counseling on psychologist numbers 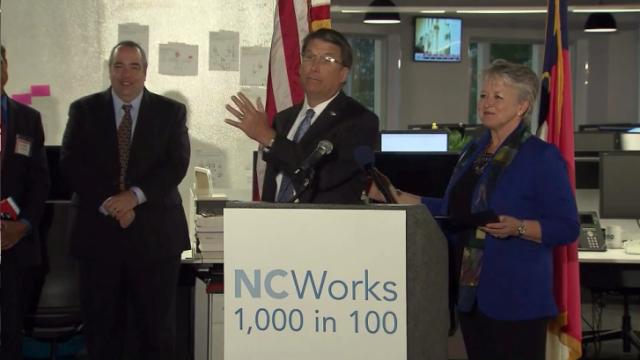 Raleigh, N.C. — Gov. Pat McCrory has never been shy about taking pot shots at journalists – we're tough, we can take it – but he seems to have overshot his rhetorical point during remarks in the Triad on Thursday.

The Triad Business Journal reported on McCrory's stop at Greensboro-based Epes Transport Thursday, where he was talking up his administration's tour of businesses across the state. He was highlighting a shortage of workers in technical fields such as information technology and those who work on big trucks.

"We've frankly got enough psychologists and sociologists and political science majors and journalists. With all due respect to journalism, we've got enough. We have way too many," McCrory reportedly told the audience. According to the report, his comments were met with a chuckle.

The governor's office on Friday morning confirmed the quote was accurate but said it would be unfair to take it out of context. For more of that context on his listening tour, check out stories by the Associated Press and WRAL News' own report.

We'll leave aside the irony of calling a news conference to promote your ongoing government program and then saying there are too many people around to cover it.

Let's look instead at McCrory's assertion that there are "enough psychologists."

Consider this report from the Wall Street Journal: "Last year, according to the U.S. Department of Health and Human Services, almost 91 million adults lived in areas ... where shortages of mental-health professionals made obtaining treatment difficult. A departmental report to Congress earlier this year said 55 percent of the nation's 3,100 counties have no practicing psychiatrists, psychologists or social workers, a combination of budget cuts and doctors leaving the profession."

McCrory's own administration has also looked at the number of behavioral health workers and psychologists and said there is a problem.

"NC has a shortage of mental health and substance abuse professionals," McCrory's Department of Health and Human Services reported to the General Assembly in 2013. The report mainly focused on public-sector health care available but had this to say about psychologists generally: "However, the density of psychologists per 100,000 population is lower in NC than the national average." The report goes on to call for producing more psychologists to keep up with demand and specifically says, "The shortage of licensed professionals in rural areas of NC is even more acute than in urban areas across the State."

There's more from the North Carolina Medical Journal on this, and a prominent political figure also has raised the profile of this problem.

“There are a lot of other things that get publicity, but the thing that keeps me awake at night is substance abuse and mental health,” McCrory said last year in relation to a shortage of mental health professionals.

UPDATE: About seven hours after this story first posted, McCrory Spokesman Josh Ellis called to say that the governor didn't have the information about psychologists when he made his remarks.

"Those numbers are right. We do need more psychologist," he said.

"Really what he talked about in terms of education, not just for K through 12 but for the community college and university systems, is education that aligns with the growing needs of the economy," Ellis said.