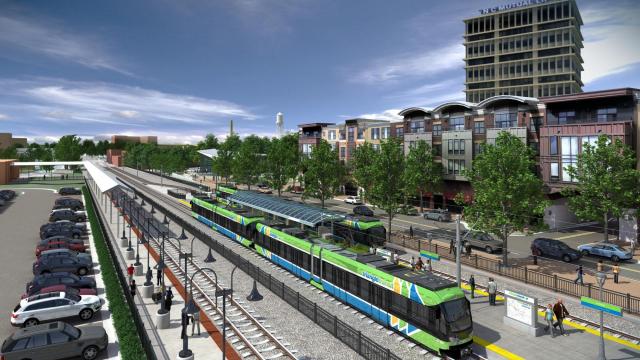 Durham, N.C. — A spokesman for GoTriangle told WRAL News Monday that if Durham's proposed light rail is to travel through the city's downtown, Blackwell Street must be closed in order to accommodate that route despite some concerns from property owners along the way.

In recent days, leaders of Capitol Broadcasting Company have opposed that closure, which would impact access to their properties American Tobacco Campus and the Durham Bulls Athletic Park. Capitol is also the parent company of WRAL-TV.

Mike Charbonneau, marketing and communications director for the transit agency, said the closure is needed because of safety concerns related to Blackwell Street's elevation, regardless of if there is a rail stop in front of the Durham Performing Arts Center and near the American Tobacco Campus and the Durham Bulls Athletic Park.

He said if the Blackwell Street crossing is not closed, vehicles could get stuck at that intersection.

According to GoTriangle, the plan to build the light-rail line within Pettigrew Street would require the roadway to be raised several feet to make it easier for traffic to cross both the railroad tracks and the light-rail tracks.

Some business owners in the area have expressed concern about closing the intersection because they fear it would cut off downtown from other areas of the city.

Duke University must donate land in order for the light rail project to happen.

In a letter last week, however, Duke President Vincent E. Price said that school officials are concerned about the impact the project will have, particularly about road closures and a portion of the line that will run through the Duke campus.