Raleigh, N.C. — With the State Board of Elections and Ethics Enforcement disbanded as of noon Friday under a court order, Gov. Roy Cooper said he would appoint an interim board to continue investigating allegations of election fraud in the 9th Congressional District race until a new law kicks in at the end of January.

But state Republican leaders are balking at that plan, insisting that Mark Harris be declared the winner of the 9th District race despite the investigation.

"The investigation as indicated by this particular board of elections is over," said Dallas Woodhouse, executive director of the North Carolina Republican Party. "There might be – and we hope there are – continuing to be criminal investigations for anybody that's done anything, but this board has failed to act. They have now expired. Mr. Harris should be seated."

The stakes of the showdown and the chaos surrounding the 9th District race have been ratcheted up as the Jan. 3 date for the new Congress to be seated approaches.

Harris leads Democrat Dan McCready by about 900 votes in the race, but state officials are investigating irregularities in absentee voting in Bladen and Robeson counties at the east end of the district. A political operative hired by the Harris campaign is accused of sending people door to door to collect absentee ballots, which is illegal. 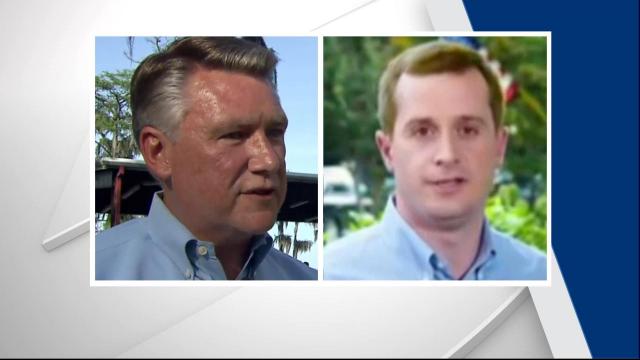 "In this instance, the integrity of our democratic process outweighs concerns about the seat being vacant at the start of the new Congress," Hoyer said in a statement to The Washington Post.

The GOP plans to ask a federal court to send Harris to Congress, said Woodhouse, who accuses Democrats on the state elections board of going on a fishing expedition to keep Harris out.

"There is simply not evidence to justify not certifying Mark Harris," he said. "I believe the federal court is going to have to intervene. They're going to force the state to certify this race, and, I believe, he's going to be in Congress sooner rather than later."

The situation resulted from two actions that occurred hours apart Thursday that left a gap in the operations of the elections board.

Lawmakers passed legislation over Cooper's veto that sets a new structure for the board, but it was written not to go into effect until Jan. 31 so that the existing board could complete its investigation into the 9th District race.

Meanwhile, a three-judge panel that has handled Cooper's repeated lawsuits over changes lawmakers have made to the elections board over the past two years refused to stay its ruling declaring the current structure of the elections board unconstitutional, meaning the board had to be dissolved Friday.

The ruling has already been stayed three times since it was handed down in October, and the judges appeared to be irked by delays in ending the 9th District race so the ruling could be put in place.

The elections board planned to be finished with its investigation by Dec. 21, but officials said collecting evidence from various parties in the case has taken longer than anticipated.

The elections board set a Jan. 11 hearing on the case, although that is now in doubt.

"The court has no reason to believe that the January timetable proposed by the board would be followed any more than the other timetables have been," the judges wrote in their five-page ruling.

"The fact remains that a critical election hangs in the balance, and the voters of the Ninth Congressional District are entitled to have their elected representative in place by the time Congress convenes, or to know why they will not have their representative in place, and further to know with certainty what action is being taken to insure they are properly represented in the important matters before Congress," they wrote.

Noting the ruling, Harris asked the elections board to certify him as the winner of the race on Friday morning before it dissolved, but that didn't happen.

Stacey "Four" Eggers, a Republican member of the elections board, said he was prepared to hear Harris' arguments Friday morning, but not enough other members supported the idea.

"There's clearly funny business ... and folks that probably need to be investigated and prosecuted," Eggers said of the 9th District probe, adding that he hasn't seen enough evidence that any fraud was large enough to erase Harris' lead.

"If we’re just in a fishing expedition, that’s not a good place for us to be," he said.

The new law passed by lawmakers to comply with the October court ruling would return the structure and the responsibilities of the elections board to how things ran in 2016 before they started tinkered with the board. The current board consists of four Democrats, four Republicans and one unaffiliated member; the new board will have five members, with a majority coming from the governor's party.

Cooper suggested naming five members of the current board to the interim one, which would serve until the new law takes effect on Jan. 31. In the alternative, he said, the state Republican and Democratic parties could nominate new people to fill the positions.

"All of these [current] members have election law experience and an awareness of the circumstances around the allegations involving the Ninth Congressional District election," Cooper wrote in a letter to the party chairmen, adding the move "complies with the law and causes the least amount of disruption.

Woodhouse called the interim board a "sham" and a "kangaroo court of elections" in tweets and said no GOP member of the board would accept an appointment to it. A temporary board wouldn't have any authority, he said.

"Put an end to this never-ending fishing expedition, which has turned into more of a partisan attempt to overturn an election than to actually find the truth," he said.

"To be clear, the structure of the boards which the governor will appoint now and on January 31, 2019, are exactly the same," McKinney wrote in a letter to Robin Hayes, chairman of the state Republican Party. "As a result, one is compelled to conclude that you are withholding your nominations and encouraging people not to serve solely for the purpose of impeding and obstructing the Ninth Congressional District investigation."

"Empty chairs on the Board of Elections help no one," Cooper spokesman Ford Porter added in a statement.

It's unclear whether the temporary board could function without any Republican members. Even if the Jan. 11 hearing cannot be held, the 9th District investigation will continue, according to Josh Lawson, general counsel for the elections board.

"As we did for roughly 11 months without appointed members last year, the agency's staff will continue investigations into alleged violations of elections and campaign finance law," Lawson said in an email to WRAL News. "Staff does not possess [the] authority to hold hearings or to certify results."