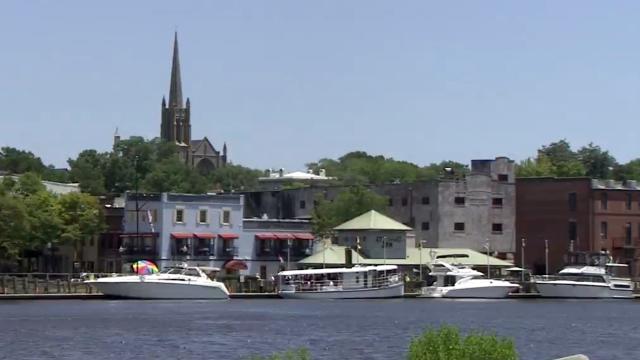 The two issues got sewn together in legislation that emerged in the early evening. House Bill 56 also includes provisions to create a new storm damage mitigation fund for the coast, as well as language that takes away some county authority to dictate that garbage collected within county borders also be dumped there.

The bill includes $435,000 in new funding to monitor and study GenX, an unregulated chemical used to make Teflon and other products that has been found in the Cape Fear River. The chemical, which the Chemours plant said it stopped discharging in June, is not fully understood but is part of a family of toxic chemicals.

The bill directs $185,000 to the Cape Fear Public Utility Authority to monitor drinking water and to try to remove the chemical from the water. Another $250,000 is earmarked for the University of North Carolina at Wilmington to measure the concentration of the chemical in river sediments and to otherwise study the chemical.

Gov. Roy Cooper had asked for $2.6 million in funding so the state Department of Environmental Quality and Department of Health and Human Services could monitor GenX in the water and study the health effects of long-term exposure to it. Republican legislators who negotiated this bill Wednesday promised more funding to come, saying this first appropriation is just a start.

State environmental officials began testing locations along the Cape Fear River for concentrations of GenX on June 19, 2017, and have continued to sample the water to track the contaminant. After the chemical company Chemours agreed to stop dumping GenX into the river June 20, concentrations dropped drastically, in most cases below the 140 parts per trillion public health standard set by the Department of Health and Human Services.

When this site was last tested on  , its GenX concentration averaged below the state health standard of 140 parts per trillion. Many of the samples were tested by two labs – one at the EPA and the other at the Colorado-based Test America.

The state's plastic bag ban, in effect since 2009 on the barrier islands and peninsulas of Dare, Currituck and Hyde counties, would be repealed under the House Bill 56.

Jackson, D-Wake, asked Republican bill negotiators in committee why GenX couldn't have its own bill.

"It's the vehicle we used," said McElraft, who helped work out the final language. "That's the privilege that we have here, to use any vehicle we want."

Cooper's office had no immediate comment on the bill. The Sierra Club's North Carolina chapter criticized the funding as too little and said money should have been directed to the state's environmental and public health agencies. It called the legislature's proposal "like asking everyone except a doctor to examine a sick patient.”

The Sierra Club also sounded an alarm on the landfill section of the bill, which county governments also opposed. The bill's shift in "flow control" of garbage streams "could be a bonanza for these companies, as they compete for revenue from both in-state and out-of-state waste streams," the group said.

The North Carolina Association of County Commissioners said this section of the bill had been improved since it was first proposed, providing exceptions to the limits on local government authority. But the group still opposes the bill, lobbyist Johanna Reese said, because it could make it more difficult for counties to fund their own landfill operations.

Supporters of the concept said it would inject more competition into the trash business.

The Senate vote Wednesday was 29-10 on the bill, split along party lines. Eleven members were absent when the vote was taken shortly before 6:30 p.m.

Democrats in the House pushed to delay that chamber's vote until Thursday. The House is scheduled to come back into session at 10 a.m. for what is slated to be its last meeting day until October.