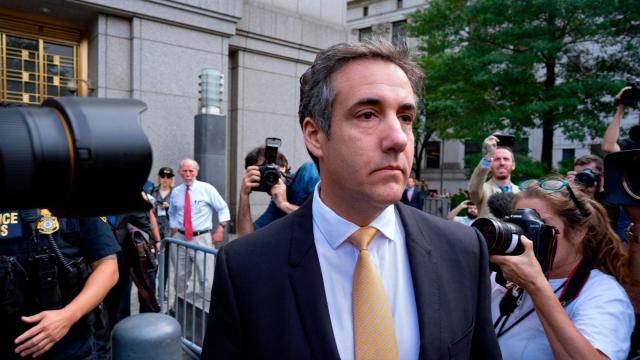 (CNN) — President Donald Trump on Friday was implicated by prosecutors in two crimes committed by his former attorney Michael Cohen.

But Republicans are mostly shrugging their shoulders.

Democrats are suggesting Trump committed an impeachable offense and could be sent to prison in the aftermath of Friday's filing from the US Attorney's office in Manhattan, in which federal prosecutors said for the first time that Trump directed Cohen when Cohen committed crimes by paying women for their silence about alleged affairs. Republicans on Monday, however, downplayed the possible danger for Trump when asked about the new allegations, questioning whether Cohen's story was credible and saying they wanted to reserve judgment until all of the facts come out from special counsel Robert Mueller.

Asked if he had any concerns that Trump was implicated, Hatch told CNN: "The Democrats will do anything to hurt this President." Informed it was alleged by federal prosecutors in New York, Hatch said: "OK, but I don't care, all I can say is he's doing a good job as President."

Other senators questioned whether the allegations from Cohen that Trump was involved were credible, given the source was a known liar. Trump on Saturday denied that he directed Cohen to make the payments.

"As long as Cohen's a liar, I shouldn't give much credibility to what he says," said outgoing Senate Judiciary Chairman Chuck Grassley, who will run the Finance Committee next year.

Cohen first made the allegation in court in September that he was directed by Trump to make the payments to the two women. But prosecutors endorsed the allegation in a sentencing document for Cohen on Friday, in which they said Cohen should receive a "substantial sentence" for the crimes he committed, which included campaign finance violations for the payments to the two women, tax fraud and lying to Congress.

Grassley said that the federal prosecutors got their "information from a liar."

Sen. John Kennedy, a Louisiana Republican, questioned both that prosecutors would rely on Cohen's information and also that the allegations had strayed from the original Russia collusion investigation from the special counsel.

"Jesus loves him, but everybody else thinks he's an idiot," Kennedy told reporters. "He's obviously a sleaze-oid grifter. And if I were a prosecutor, I wouldn't base a prosecution on evidence given to me by Mr. Cohen."

"Look I'm not minimizing it, this campaign finance act is important," Kennedy added. "But No. 1, it's a long way from collusion with a foreign agent to influence the election in 2016, which is what I thought this was about. No. 2, Campaign Finance Act violations are, generally, civil matters." He noted sometimes they are also criminal cases, such as the unsuccessful prosecution of former Democratic presidential candidate John Edwards.

South Dakota Sen. John Thune, who will be the No. 2 Senate Republican next year, said it was "premature" to judge how the Cohen developments would impact the broader investigation and Trump.

"I mean, until we know all the details -- it's a sentencing filing," Thune said. "I'm sure there's going to be a lot more come out from the Southern District (of New York) and, at some point, from the Mueller investigation as well. So, it's hard to read too much into it."

Sen. Susan Collins, a Maine Republican who is on the Senate Intelligence Committee, said she needed to wait to see all of Mueller's findings before determining whether the President may have broken the law.

"We have to get all the facts and I'm going to wait until Mr. Mueller concludes his investigation. I've not reviewed the filings that you've referred to," she said of the Cohen sentencing filing.

"I don't know that it changes things much," said Sen. Roy Blunt, who will be the No. 4 Senate Republican next year. "I think you would have to have more than this happen before anything changes much."

Hatch suggested the allegations from Cohen were being blown out of proportion in order to attack Trump.

"I don't think he was involved in crimes but even then, you know, you can make anything a crime under the current laws if you want to, you can blow it way out of proportion, you can do a lot of things," Hatch said. "All I can say is this: President Trump, before he became President, that's another world."