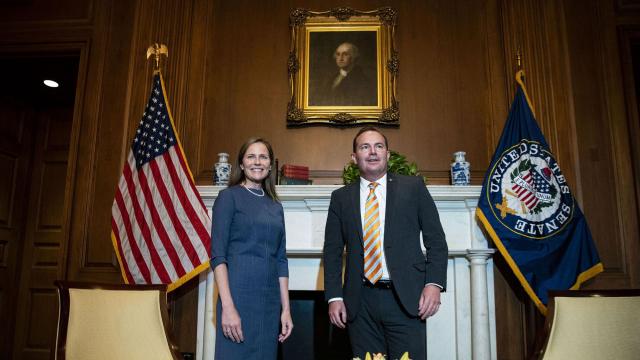 CNN — Two Republican senators on the Senate Judiciary Committee announced Friday that they had tested positive for Covid-19, potentially jeopardizing the GOP's hopes of swiftly confirming Judge Amy Coney Barrett to the Supreme Court if they were both to remain unable to vote in the full Senate through the end of the month.

Sens. Mike Lee of Utah and Thom Tillis of North Carolina announced they'd tested positive -- just days after attending a White House event where President Donald Trump nominated Barrett. Multiple attendees of that event, including Trump, have tested positive in the week since the ceremony, which featured many people not wearing masks and not observing social distancing protocols.

Senate Minority Leader Chuck Schumer on Friday renewed demands for Republicans to delay Barrett's confirmation hearings, but Republicans show no signs of changing course at the moment, with plans to start the hearings October 12.

Confirmation hearings could go on without Lee and Tillis, both of whom met in person with Barrett earlier this week. They could either choose not to participate or to participate virtually. They do not need to be present to vote and could vote by proxy.

The greater concern for Republicans is the Senate floor vote, for which lawmakers do need to be present to vote and for which the GOP has no margin for error. If Tillis and Lee were to be gone for an extended period, it would threaten the chances of confirming Barrett, given Republicans' 53-47 majority.

Already, two other Republicans — Susan Collins of Maine and Lisa Murkowski of Alaska — have signaled they are unlikely to vote for Barrett because they think the high court selection should be made by whoever wins the White House on November 3.

If only Lee were out, Barrett could still get confirmed with the tie-breaking vote of Vice President Mike Pence. But if one more Republican were unavailable to vote, they wouldn't have the votes to confirm Barrett. So now that Tillis is also entering isolation, the GOP's math gets trickier since it's unknown how long the senators will be out.

Republicans have told CNN the current plan is to vote on the nomination the last week of October.

Lee tweeted on Friday that he took the test Thursday, and would "remain isolated" for 10 days. He said he has "assured" Senate Republican leaders that he will "be back to work" to join the Judiciary panel to advance Barrett's nomination to the full Senate for a confirmation vote.

Tillis, who's locked in a right reelection, said in a statement that he tested positive Friday night and he will be isolating at home for 10 days.

"Thankfully, I have no symptoms and I feel well. As we all know, COVID-19 is a very contagious and deadly virus, especially because many carriers are asymptomatic. I encourage all North Carolinians to follow the recommendations of medical experts, including wearing a mask, washing hands, and practicing social distancing."

Tillis is facing off against Democrat Cal Cunningham in a seat that is fourth on CNN's list of the top 10 seats most likely to flip partisan control in November. Inside Elections with Nathan L. Gonzales, a CNN contributor, on Thursday shifted Tillis' race from Toss-up to Tilt Democratic.

In a tweet, Cunningham wished Tillis well and said he too would get tested.

"I'm wishing @SenThomTillis a quick recovery following his positive COVID-19 test, and am thinking of him and his family," Cunningham said. "Because I was with Senator Tillis recently on the debate stage, I will also get tested."

Tillis staffers who were in contact with him this week will quarantine and get tests in the coming days, and his Charlotte campaign headquarters is closed until further notice.

Barrett tested negative for coronavirus on Friday, according to White House spokesperson Judd Deere, and CNN reported earlier Friday that she was diagnosed with coronavirus late this summer but has recovered, according to three sources familiar with the matter.

Trump disclosed that he contracted the virus hours before Lee's announcement.

Lee said he experienced symptoms "consistent with longtime allergies" on Thursday morning and took the test "out of an abundance of caution." He said he also took the test "just a few days ago" when he visited the White House for the announcement of Barrett's nomination.

"Like so many other Utahns, I will now spend part of 2020 working from home," said Lee in his statement.