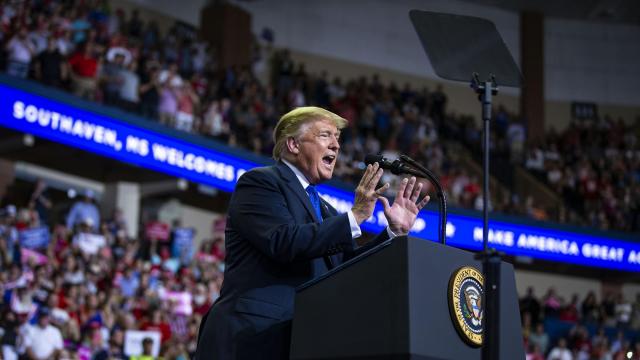 WASHINGTON — President Donald Trump and his conservative allies now see their effort to confirm Judge Brett Kavanaugh as central to salvaging the Republican Party’s fortunes in the midterm elections and hope to use the fervent liberal opposition to his nomination to the Supreme Court as a graphic example of the threat posed by a Democratic return to power in Congress.

The increasingly aggressive attacks on Kavanaugh’s main accuser and the dark warnings about Democrats from his supporters are part of an effort to harness Republicans’ outrage over what they see as a Democratic plot to steal a pivotal Supreme Court seat.

“What the Kavanaugh controversy has done is increase Republican voting intensity so that it is approaching Democratic intensity, which is already through the roof,” said Whit Ayres, a Republican pollster. “Republicans perceive that Judge Kavanaugh is a man who has led an upright and honorable life, certainly as an adult, and feel like his reputation is being trashed and his nomination is being railroaded.”

But even as Senate Republicans are increasingly confident that Kavanaugh will be confirmed, some party leaders fear his confirmation could dissipate some of the anger and sap the party of a powerful source of energy.

Conservatives like Matt Schlapp, chairman of the American Conservative Union, argue that the intensity with which Democrats went after Kavanaugh should frame for Republicans the threat posed by the loss of one or both chambers of Congress in November.

Democrats “don’t just disagree with Trump, they hate him and they want him in prison,” Schlapp said. “The Kavanaugh confirmation is the personification of that.”

“What this election is about,” he added, “is, No. 1, if the Democrats win the House, they will impeach him; No. 2, we’re finally getting our country back, and the Democrats want to pull us off course; No. 3, we want Kavanaugh.” Other allies of the president have been just as blunt.

“What we’re seeing with Kavanaugh is a dry run,” said Roger Stone, a longtime friend of the president’s who has strong ties to conservative activists. “You’ve seen the dress rehearsal for the impeachment of President Donald Trump.”

Patrick Buchanan, whose conservative, populist-inspired presidential campaign in 1992 is often cited as a blueprint for Trump’s 2016 run, wrote in his online column this week that the accusations against Kavanaugh constitute a “lynching” and are part of “the playbook for what is planned for Trump.”

“What is being done to Kavanaugh is, if Democrats take control of Congress in November,” Buchanan wrote, “a harbinger of what is to come.”

For his part, Trump has stepped up attacks on Democrats for their “VICIOUS AND DESPICABLE” treatment of Kavanaugh, as he put it on Twitter. On Thursday, the president linked the Kavanaugh confirmation directly to his party’s prospects in November, tweeting that the confirmation spectacle “is having an incredible upward impact on voters.”

“The PEOPLE get it far better than the politicians,” Trump added. “This great life cannot be ruined by mean & despicable Democrats and totally uncorroborated allegations!”

If Kavanaugh is confirmed by the Senate in a final vote that Republicans hope to hold this weekend, it most likely would mean a majority for the court’s conservatives for years to come. And from the beginning, that possibility framed the high-stakes struggle over the nomination.

Then came the allegation against the judge that he had tried to rape Christine Blasey Ford when they were teenagers. That injected into the debate questions of justice for victims of sexual assault, already a combustible topic a year into the #MeToo movement.

While Republicans always expected Democrats to use every political and procedural avenue available to them to slow Kavanaugh’s confirmation, many of them have said they were caught off guard by how intense, furious and personal the opposition was.

Sen. Mitch McConnell, the Republican leader, spoke to this sentiment Thursday when he condemned the actions of activists he described as “rampaging through the halls, accosting members at airports, coming to their homes.” Part of the more aggressive Republican response over the past few days was a reaction to this and a realization that conservatives should be hitting back harder.

“This process,” McConnell said, “has been ruled by fear, and anger, and underhanded gamesmanship for too long.”

While anger at Republicans for tending to believe Kavanaugh’s denials over Blasey’s account has animated many women on the left, many conservative women are angry too for what they say is a political hit job masquerading as a social justice campaign. Many of these women say they are furious with Sen. Dianne Feinstein of California, the top Democrat on the Judiciary Committee, who kept Blasey’s allegation from Senate Republicans until a confirmation vote appeared imminent.

Hugh Hewitt, the conservative radio host, devoted a segment of his program this week exclusively to female callers. “This whole fiasco has set women back over a decade,” said one. Another exclaimed, “I am so angry I can barely breathe.”

At Trump’s rallies in Tennessee and Mississippi this week, voters who were interviewed said they did not consider Blasey’s complaint to be credible.

“I don’t think that the Democrats treated him with very much respect,” Jill Gregory, a homemaker who attended the Mississippi rally, said of Kavanaugh in a phone interview. “They already had it in their minds that he was guilty before proven innocent, and that’s not right.”

Anger on the right has only built with the Senate’s delay in voting on the nomination in response to a request by Sen. Jeff Flake, R-Ariz., and his allies for a more extensive investigation by the FBI into the allegations against Kavanaugh.

An NPR/PBS NewsHour/Marist poll released Wednesday showed that a 10-point edge that Democrats held in July in a measure of voter enthusiasm had shrunk to 2 points, a statistical tie. Some other polls, however, have found no such closing of the gap.

But it remains to be seen if a heightened level of Republican voter engagement will have a lasting impact if Kavanaugh is confirmed this weekend, as the White House anticipates he will be. Republican strategists said they could not be sure what issues the electorate would be most animated by five weeks from now when voters cast their ballots.

“We’ll be testing the impact of the Democrats’ tactics on various constituencies,” said Steven Law, president of the Senate Leadership Fund, a Republican super PAC. “But it’s possible that those who are enraged by it — on both sides — are already so fully engaged that they don’t need any additional motivation.”

And there is always the risk that Republicans’ harder-edge approach will backfire with voters who see them as dismissing sexual assault. As he campaigns for House and Senate candidates across the country, Trump has been framing the midterm elections as “a vote to reject the politics of anger, destruction and chaos,” as he said in Mississippi on Tuesday.

But in that same speech he also dropped any semblance of deference toward Blasey and embraced the aggressive, no-apologies approach that many of his allies have taken.

This is not universally seen as a good idea in the Republican Party or the White House. Many Republican senators, for instance, say privately that they would rather Trump steer clear of discussing Blasey at length. And several rebuked him publicly this week for disparaging her in Mississippi.

If those remarks made senators uncomfortable, many in the crowd that night cheered the president on, viewing Blasey just like any opponent of Trump. Initially, the president had restrained himself from doing this. The sensitivity of the situation sank in over the past week and a half, White House aides said, and Trump decided not to tweet some of his more unfiltered and provocative thoughts after talking it through with his staff.

But by midweek, as more Republicans started to move the conversation away from gender and justice and toward partisan politics, all bets were off.

Sen. Lindsey Graham, R-S.C., helped shift the tone among his Senate colleagues late last week when he delivered a diatribe denouncing how Democrats had handled the Kavanaugh process. “This is the most unethical sham since I’ve been in politics,” he declared after Kavanaugh had himself given an angry and, at times, belligerent speech to the Senate Judiciary Committee denying Blasey’s charges.

On Thursday, as senators reviewed the findings from a reopened FBI investigation into the judge’s background, Graham was confronted by anti-Kavanaugh demonstrators in the basement of a Senate office building.

“You’ve humiliated this guy enough, and there seems to be no bottom for some of you,” he shot back. “Why don’t we dunk him in water and see if he floats.”