Louie Gohmert, who's refused to wear a mask, tests positive for Covid-19 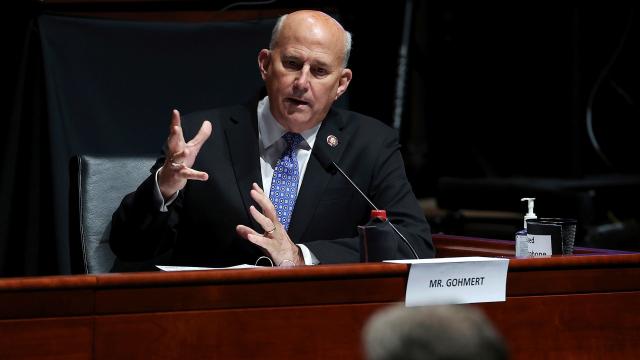 CNN — Rep. Louie Gohmert, a Texas Republican who has frequently refused to wear a mask, has tested positive for coronavirus.

Gohmert has spent ample time on the House floor during votes speaking to aides and lawmakers — without a mask or social distancing. His office did not respond to multiple requests for comment.

Gohmert had been scheduled to fly aboard Air Force One on Wednesday with President Donald Trump to Midland, Texas, where the President is fundraising and touring an oil rig. He tested positive for coronavirus on Wednesday morning during a pre-flight screening at the White House, a person familiar with the situation told CNN. Because of the positive test, Gohmert is not traveling with the President.

A senior Republican aide told CNN the test results have caused issues on the Hill where "a lot of staffers" were ordered to get tests before they can go to meetings and resume activity. Some are sequestering in their offices until they can get tested. Gohmert's office notified Republican leaders, who notified House medical staff and the protocol kicked in for further notification, the GOP aide said.

Gohmert told CNN last month that he didn't wear a mask because he had been tested and he didn't yet have the virus. "But if I get it, you'll never see me without a mask," he said.

In an interview with a local Texas television station KETK on Wednesday, Gohmert suggested he may have contracted coronavirus by incorrectly wearing his mask.

"I can't help but wonder if by keeping a mask on and keeping it in place, that if I might have put some germs or some of the virus onto the mask and breathed it in," Gohmert said. He added that he has been wearing a mask more during the past two weeks than he has in the past three or four months.

"I can't help but think that if I hadn't been wearing a mask so much in the last 10 days or so, I really wonder if I would have gotten it," Gohmert added. "You know, moving the mask around, getting it just right, we're bound to put some virus on the mask that I sucked in. That's most likely what happened."

Incorrectly wearing a mask, including touching and adjusting it in public, can lead to exposure to the virus. Face masks are most effective when wearers do not touch their faces or move the mask around when using it. But Gohmert's claim that such a scenario is "most likely" how he was infected is questionable, as experts say the virus primarily spreads during person-to-person contact.

He said having the virus doesn't change his views on wearing masks, but now that he has it he "will be religiously wearing a mask" if it is possible he will come into contact with anyone else.

"I will not be around anybody for the next 10 days without making sure that I have a mask," Gohmert said. "Because that's the real danger. Once you have it, giving it to somebody else, and that's when a mask if most important."

The Centers for Disease Control and Prevention recommends that anyone testing positive for the virus should completely avoid people, if at all possible, for 10 days if they have no symptoms and otherwise until their symptoms have been gone for at least 24 hours. Gohmert, who has no symptoms, said he will isolate for 10 days in accordance with those guidelines.

Gohmert is just one of several conservative Republicans who have pushed back on mask-wearing at the Capitol, sometimes causing tension during committee meetings.

"I would remind Mr. Jordan, Mr. Biggs and Mr. Johnson to stop violating the rules of the committee, to stop violating the safety of the members of the committee, to stop holding themselves out as not caring by refusing to wear their masks," the New York Democrat said, referring to GOP Reps. Jim Jordan of Ohio, Andy Biggs of Arizona, and Mike Johnson of Louisiana.

"Is it permissible to drink a sip of coffee?" Johnson countered.

Gohmert was also present at the hearing. He wore a mask during the proceedings and was not included in the group Nadler reprimanded. He was seen maskless outside the room near Barr at one point, however. The Justice Department told CNN Wednesday that Barr will get tested.

In another hearing Wednesday, Democratic Rep. Zoe Lofgren of California interjected to remind members who are physically present that they are required to wear a mask.

"He was a member who was unwilling to consistently wear a mask," Lofgren said of Gohmert. "It's a reminder that this is very serious and if you're unwilling to wear a mask that covers your nose and your mouth, please do leave the room and we'll arrange for you to participate remotely."

"I'm concerned about the irresponsible behavior of many of the Republicans who have chosen to consistently flout well-established public health guidance, perhaps out of fealty to their boss, Donald Trump, who is the head of the anti-mask movement in America," Jeffries said at a news conference. "That's a concern."

A number of lawmakers tested positive for the virus in the early days of the pandemic, while others had to quarantine after being exposed to the virus.

The House has taken precautions to limit the spread of the virus, including instituting a form of remote voting for members who are unwilling or unable to travel. Members who are physically present now vote in alphabetical groups to limit how many people are on the House floor at the same time. Members have also adopted virtual meeting technology for many House hearings.

In May, House Speaker Nancy Pelosi and Senate Majority Leader Mitch McConnell jointly rejected an offer from the White House to send rapid testing resources to the Capitol complex.

They said they wanted "to keep directing resources to the front-line facilities" fighting the virus, and that lawmakers and staff would use "current testing protocols that the Office of the Attending Physician has put in place until these speedier technologies become more widely available."

House Majority Leader Steny Hoyer said Wednesday that the House isn't mandating testing for lawmakers at this point, but "we're discussing that."

"This is, I think, a moment where we ought to discuss it again," Hoyer said.