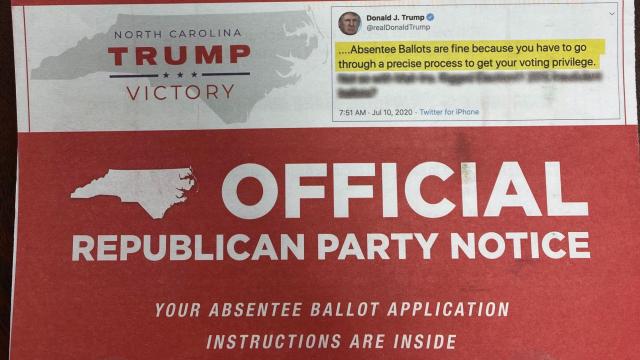 Raleigh, N.C. — The North Carolina Republican Party is telling its voters to vote by mail this year, despite President Donald Trump's repeated criticism of that option.

A party mailer addressed this month to North Carolina conservatives includes a ballot request form and asks them to "request your absentee ballot today." It includes a seal-of-approval tweet from the president himself.

"Absentee Ballots are fine because you have to go through a precise process to get your voting privilege," the president wrote on July 10.

But he also continued: "Not so with Mail-Ins. Rigged Election!!! 20% fraudulent ballots?"

The state GOP included an image of the whole tweet on its mailer, but blurred out the the second part. The part suggesting a rigged election, a claim that has repeatedly been debunked.

"The mailer highlighted the portion of the tweet relevant to North Carolina voters," state Republican Party Chairman Michael Whatley said in a statement. "We, along with the president, oppose an all-mail election where all voters are simply mailed ballots without a request or authentication." 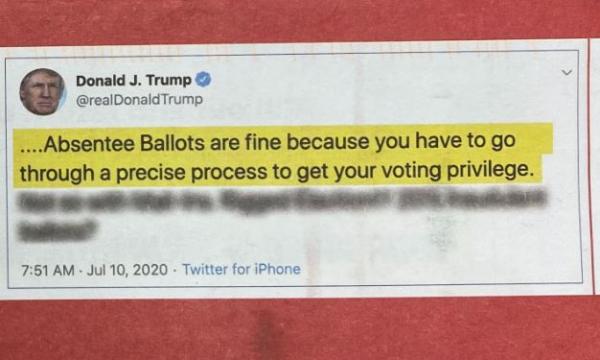 An all-mail election isn't on the table in North Carolina, though some states offer it and some Democrats have pushed for expansions. Some people distinguish between absentee voting, where voters must request a ballot, and vote-by-mail, where registered voters are sent one automatically. Others use the terms interchangeably.

There are also states that automatically send voters a request form they can then use to get a ballot. North Carolinians typically have to ask for the request form, though a number of groups send mass mailings, providing people with the form they need to request a ballot from the state.

With all of these methods, experts say the security measures are similar.

"We don’t want to confuse North Carolina’s absentee system with other states' all-mail elections," Whatley said in his statement. "We agree with the president that absentee ballot request system is safe and secure. We want to provide our voters with every opportunity to utilize this tool in an easy, safe and secure manner."

State officials expect a big uptick in absentee voting this year as voters look for ways to avoid large crowds on Election Day due to coronavirus concerns. So far, Democrats have dominated absentee requests. As of Friday, nearly 47,000 registered Democrats had asked the state for an absentee ballot, compared with 9,229 Republicans.

Nearly 31,000 unaffiliated voters had requested a ballot, according to statistics from the State Board of Elections.

"They’re looking at that data, saying we really need to do something here," said Justin King, a Democrat running for the Johnston County Board of Commissioners.

King saw the mailer on a local Facebook group for Democrats, then sent the image out on Twitter this week. That's where WRAL News noticed it.

“It’s just interesting hearing that the president’s saying one thing and the party’s doing something different," King said.

Experts say it would be all but impossible to rig an election the way the president describes, but absentee ballots are not without risk. North Carolina held a do-over election last year in the 9th Congressional District after a ballot harvesting scam in the 2018 election was unearthed.

A Republican operative sent crews door to door in and around Bladen County, getting people to request ballots, then coming back to collect those ballots. In North Carolina, it's generally illegal to take possession of someone else's ballot due to tampering concerns.