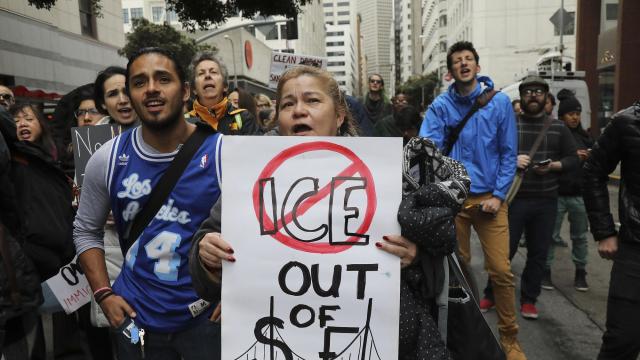 WASHINGTON — Not long ago, as heart-rending images of migrant children separated from their parents at the border filled the airwaves, the issue of immigration seemed to be losing some of its potency as a weapon for Republicans with the midterm elections approaching.

But Republican candidates across the country, leaning on the scorched-earth campaign playbook employed by President Donald Trump, saw an opening nonetheless, painting Democrats as the ones pursuing an extreme immigration agenda that would fill the country with “sanctuary cities” where violent criminals roam free.

The strategy, in play in a growing number of races, may be working. As a tight battle for control of Congress enters its closing weeks, Democrats have found that in politically competitive states, particularly ones that Trump carried in 2016, the attacks can easily turn crucial voting blocs against Democrats.

“Sanctuary attacks pack a punch,” says a four-page memorandum, prepared by the liberal Center for American Progress and the centrist think tank Third Way, that has been shared at about a dozen briefings for Democrats in recent weeks. The New York Times obtained a copy of the memo, whose findings are based on interviews and surveys conducted over the summer.

Many of the Republican attacks use misleading language and employ overblown claims about the dangers of immigrants. But the fear-based appeal demonstrates how Trump has overcome months of negative headlines about his hard-edge immigration policies to make the issue a potentially profitable one as Republicans try to preserve their slim Senate majority and defy projections that they will lose the House.

Democrats, the strategists who prepared the memo advised, could neutralize the attacks if they responded head-on. But they should spend “as little time as possible” talking about immigration itself, and instead pivot to more fruitful issues for Democrats like health care and taxation.

The strategists worry that Republicans’ foreboding immigration message is far more personal to most voters than the more modulated position of Democrats, whose push to protect the young immigrants known as Dreamers and to ensure humane treatment of unauthorized immigrants does not, in many cases, affect voters themselves.

“It is very difficult to win on immigration with vulnerable voters in the states Trump carried in 2016,” the strategy memo said, arguing that “even the most draconian of Republican policies,” such as family separation and threats to deport the Dreamers — unauthorized immigrants who were brought to the United States as children — failed to sway most of them.

But where Democrats see caution signs, Republicans see opportunities. Matt Gorman, communications director of the National Republican Congressional Committee, the party’s House campaign arm, said immigration themes — “sanctuary cities” in particular, as well as liberal calls to abolish Immigration and Customs Enforcement — were among voters’ top concerns in some places where Hillary Clinton won in 2016 and where Republicans are now battling to hang on to competitive seats.

“It’s a surprising development in a way, but at least in certain swing districts, it’s a way for Republicans to really go on offense,” Gorman said. “What we are really focused on is localizing it, so it’s about what people are experiencing in their own communities.”

In Pennsylvania, a Republican congressional candidate invoked the rape of a 5-year-old girl by an unauthorized immigrant to attack his Democratic rival’s stance on immigration. In North Dakota, a Republican Senate candidate accused his Democratic opponent of wanting to let cities “hide illegal immigrants, especially those who commit violent crimes.” Trump has been blunter: Democrats, he said, support “sanctuary cities of death.”

The problem for Democrats begins with that term: The loaded phrase refers to jurisdictions that limit their cooperation with federal immigration authorities, declining to hold unauthorized immigrants past their release dates even if Immigration and Customs Enforcement, known as ICE, has requested that they remain detained for possible deportation.

But during his campaign rallies, Trump — who made a harsh immigration message, which critics called racist, a key component of his 2016 campaign — has portrayed “sanctuary cities” as lawless places where danger lurks around every corner.

“Every day, sanctuary cities are unleashing vicious predators and bloodthirsty killers, like MS-13, into our communities,” Trump said in Southaven, Mississippi, referring to the brutal transnational gang with roots in Central America. “They go out and they hide out in sanctuary cities. Then they come into our cities and our towns.”

But Republicans’ dark warnings have their limits and risks, including the potential to alienate some women who recoil from the hardest-edge, most racially charged attacks. And the researchers found that they do not resonate with white, college-educated voters.

In Democratic-leaning states, immigration is a perilous issue for Republicans, as Democrats work to tie them to the Trump administration’s restrictive policies in general and the family separation crisis in particular. But in competitive districts and states, it can be particularly potent with groups that Democrats must win if they are to have a shot at wresting control of the House or the Senate: voters without a college education, older women and independent voters.

“Republicans want to try and see if this is an issue that actually can bring some of the women that they’ve been bleeding home,” said Navin Nayak, the executive director of the Center for American Progress Action Fund. “The challenge Democrats face right now is that voters don’t really know what they stand for on immigration, so an attack on sanctuary cities or ICE, which concerns a lot of voters, has the potential to have more salience unless you respond.”

Democrats can insulate themselves if they mount a defense, as Sharice Davids, a House candidate in Kansas, did when the political action committee affiliated with the House speaker, Paul D. Ryan, unleashed a barrage of immigration-themed attacks ads against her, accusing her of supporting “open borders” and the abolishment of ICE.

The Republican effort appears to have fallen flat; the National Republican Congressional Committee has canceled a large advertising purchase in the district, in a sign that it considers the Republican who now holds the seat, Kevin Yoder, a lost cause. In Davids’ rebuttal ad, in which she speaks directly into a camera, she says Republicans are “twisting my words” on immigration and charges that Yoder “plays politics with immigration, but does nothing.”

“Democrats have figured out that talking like Republicans doesn’t get you many Republicans, and demoralizes your base, and that instead, you can decry the racism in these attacks, and pivot to the kitchen table issues that most voters care about without throwing immigrants under the bus,” Sharry said. That tough Republican talk can be heard in anti-immigration messages around the country. On Wednesday, the National Republican Congressional Committee released an ad in which a frightened-looking white woman locks the windows and doors and lowers the blinds in her darkened house as police lights flash outside and she criticizes the immigration record of Ann Kirkpatrick, a Democratic former representative now running for another seat in Arizona. “We, who live here, are forgotten,” the woman says, invoking language Trump often uses to describe his supporters, “the forgotten men and women.”

Still, shortly after releasing the spot, the committee canceled television buys in the Arizona race, where a New York Times/Sienna poll found Kirkpatrick with an 11-point advantage.

In August, John Chrin, a Republican candidate in Pennsylvania, ran an advertisement branding his Democratic opponent, Rep. Matt Cartwright, “a disgrace” for supporting “sanctuary cities.” The spot shows an image of a young girl playing hopscotch as the narrator tells the story of a 5-year-old girl raped by an unauthorized immigrant who had been released from police custody in Philadelphia after charges of aggravated assault were dropped. ICE had requested that he be detained until he could be picked up for possible deportation.

In North Dakota, Rep. Kevin Cramer, a Republican, has charged that Sen. Heidi Heitkamp, the Democrat he is leading in the Senate race, supported federal funding for “sanctuary cities that ignore the rule of law and put our citizens and law enforcement officers at risk.”

“If you can plug your facts into the kind of things that people are afraid of, you win, and Trump has been really good at playing to these fears and that uncertainty,” said Tamar Jacoby, the president of ImmigrationWorks USA, a nonprofit group representing employers who rely on immigrant labor.

“If people feel that they are getting the short end of the stick, which a lot of people in America do, and somebody says it’s because somebody else has benefited at your expense, voters buy it,” added Jacoby, who has advised members of both parties. “And Trump knows that better than anyone.”