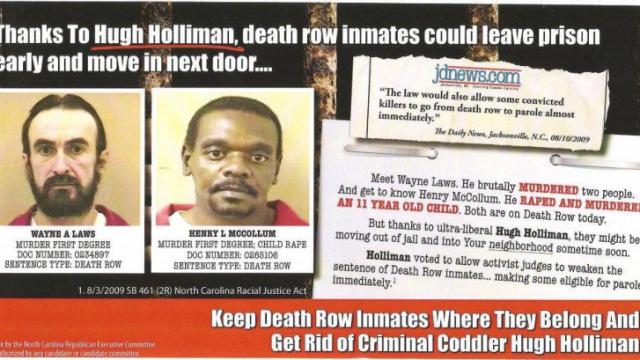 Raleigh, N.C. — Henry McCollum, the death row inmate who walked free this week after being exonerated, played a part in a 2010 state House campaign.

McCollum's mug shot and a statement that he "raped and murdered an 11-year-old child" were featured on a flier by the North Carolina Republican Party that attacked former Rep. Hugh Holliman, D-Davidson, who was the House majority leader at the time. Holliman lost his seat in the 2010 election that put Republicans in control of both the House and the Senate for the first time in more than a century.

The ad played on Holliman's vote in favor of the Racial Justice Act, a law that was designed to allowed death row inmates to challenge their sentences based on statistical and other evidence of racial bias.

Although the law allowed judges only to change sentences of death row inmates to life in prison, the flier said, "thanks to ultra-liberal Hugh Holliman, they might be moving out of jail and into Your neighborhood sometime soon."

That claim was particularly jarring because Holliman's 16-year-old daughter was murdered in 1985, and he remained a staunch death penalty supporter after witnessing her killer's execution. That ad was considered so over the line, it prompted an apology from the Republican Party.

"I called and told Mr. Holliman that I wanted to apologize if the mailer caused him any personal anguish or discomfort," Tom Fetzer, who was then the chairman of the North Carolina Republican Party, told the Winston-Salem Journal at the time. "We did not know about the tragic death of his daughter. If we had known, we would not have sent that mailer out in his district."

After Republicans won control of the General Assembly, GOP majorities voted in large part to repeal the Racial Justice Act.