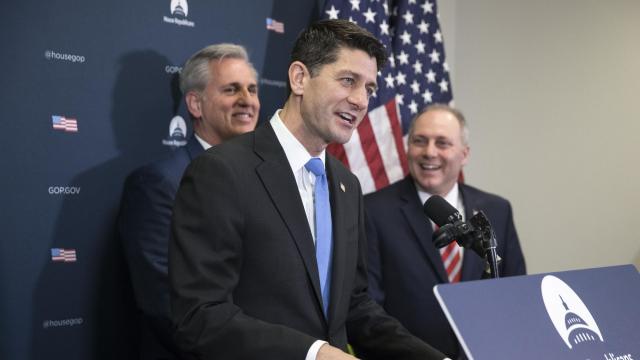 WASHINGTON — President Donald Trump ended a chaotic first year by achieving his most convincing legislative triumph on Wednesday, making good on his promise to deliver what he called a “big, beautiful” tax cut before Christmas and finally demonstrating the political power of unified Republican control in Washington.

Trump will soon affix his signature to the $1.5 trillion tax overhaul that will have broad and far-reaching implications for individual and corporate finances, and will cement the president’s political ownership of an already growing economy that he inherited from his predecessor, President Barack Obama.

House lawmakers gave final approval to the tax bill Wednesday, voting 224-201 to drop the corporate rate to 21 percent, from 35 percent, and to deliver tax breaks to other businesses. As Republicans seek to bolster American competitiveness and spur economic growth, the bill also includes tax cuts for individuals that are set to expire after 2025 to make the bill comply with budget rules.

The president’s turbulent first year in office has been dogged by investigations, staff turmoil and legislative missteps. But with passage of the tax overhaul, Trump will enter his second year in office with a roster of Republican achievements that he and his party will try to sell to voters in the 2018 midterm elections: lower taxes, more conservative judges, fewer regulations and more restrictive borders.

“This is a big week,” said Newt Gingrich, the former House speaker and a longtime Trump supporter. “A wide range of people are starting to say, ‘I like him, the tweets may irritate me, but something’s happened.’ Clearly this was the pièce de résistance — this bill at this moment just before Christmas.”

It is not clear whether Trump is going to sign the bill before the end of the year. Republicans need to work with Democrats to avert automatic spending cuts that could be set off as a result of the tax bill adding to the deficit. They need support from Democrats to avoid these spending cuts, and if they wait until next year, it will buy them extra time to reach such a deal. Republicans in Congress were struggling to reach an agreement that would keep the government funded into January and avoid a shutdown.

At the White House on Wednesday, Trump presided over a grand celebration on the South Portico, flanked by Republican lawmakers and members of his Cabinet in a show of unity. A Marine Band played Christmas carols while the president and his party soaked up a moment long in coming.

“This will indeed be a very big day, when people look back at our country. It’s a whole different attitude, a whole different way,” Trump said, congratulating the lawmakers behind him. “They have been working on this for years, years and years. And I just want to turn around and I want to thank them all. They are very, very special people.”

The lawmakers — many of whom face re-election next year — eagerly returned the favor as the president brought several of them to the lectern, where they offered a common refrain: paeans to Trump, his legislative victory and his presidency.

Sen. Orrin G. Hatch, R-Utah, the chairman of the Finance Committee, said Trump might end up being one of the country’s greatest presidents. Members of Congress who have at times been on the receiving end of brutal Twitter posts made by the president, including Sen. Mitch McConnell, R-Ky., the Senate majority leader, returned the president’s praise in kind.

“This has been a year of extraordinary accomplishment for the Trump administration,” McConnell said, as the president grinned broadly behind him. But though Trump listed a series of accomplishments during his first year in office, he confronts a challenge in the new year of persuading more Americans to get behind him.

His approval rating in polls of the American public is at historic lows, with a majority of people holding negative views of his presidency. Next year, he will face a congressional majority that will have shrunk to just one vote in the Senate, making it even harder to win approval for the rest of the Republican agenda.

And while his lawyers have suggested that they believe the special counsel’s Russia investigation is winding down, there is evidence that Trump and his associates will remain under scrutiny for months, if not longer. Two members of Trump’s campaign team have been indicted, and two others, including Michael T. Flynn, his former national security adviser, and George Papadopoulos, a foreign policy consultant, have pleaded guilty to federal crimes and are cooperating with the special counsel.

The tax victory was a rare moment of legislative success for a president who has struggled to govern in a city that he derided as “a swamp.” He has repeatedly used Twitter, his favorite means of communication, to demean and belittle members of both parties, undermining Republican leaders and generating intense opposition from Democrats.

On Wednesday, he struck a different tone, posting on Twitter to praise McConnell for shepherding the tax bill through the bitterly divided chamber.

The president’s most significant legislative misstep was a failed effort to repeal the Affordable Care Act, a Republican pledge that he echoed repeatedly on the campaign trail. In May, the president and his Republican allies in the House held what proved to be a premature victory ceremony over the chamber’s vote to replace the health care law, a measure that the Senate rejected.

The tax bill that passed includes the elimination of the Obama-era requirement that people buy health insurance, handing Trump and Republicans a talking point when they confront constituents who expected full repeal of the Affordable Care Act.

Speaking to reporters before a Cabinet meeting Wednesday morning, Trump bragged about getting rid of the health care mandate, saying that it amounted to a full repeal of Obama’s signature law.

“We didn’t want to bring it up,” Trump said. “I told people specifically, ‘Be quiet with the fake news media because I don’t want them talking too much about it.'”

Whether that proves to be a political victory for Trump and Republicans is unclear. Many of his core supporters will appreciate the move. But the president’s eager declaration that “Obamacare has been repealed” also means that he could be held responsible if premiums rise or people struggle to secure health insurance.

The tax overhaul also provides a break to owners of pass-through businesses, whose profits are taxed through the individual code, and lowers the top individual rate to 37 percent, down from 39.6 percent. It nearly doubles the standard deduction and doubles the child tax credit and the size of inheritances shielded from estate taxation.

In a move that drew significant criticism from lawmakers from states with high taxes, the bill caps the deduction for state and local taxes at $10,000. Twelve House Republicans voted against the tax bill, and 11 of those members were from California, New Jersey and New York, three states with high taxes.

It also opens the Arctic National Wildlife Refuge in Alaska to oil and gas drilling.

Polls suggest that most Americans view the tax overhaul with suspicion. In a Quinnipiac University poll released last week, a majority of people said they saw the plan negatively, with only about 16 percent saying they believe it will lower their taxes. Democrats predicted Wednesday that the political benefits for Trump would evaporate quickly.

“He hasn’t accomplished any meaningful part of his legislative agenda since the beginning of the year,” said Sen. Michael Bennet, D-Colo. He added, referring to the fact that the cut is so large that independent analysts say it will produce a deficit for years to come, “As soon as the American people see what’s in the bill, and that it borrows from their children to pay for it, it they will reject it.”

Republican lawmakers said they believed the public’s opinions about the tax overhaul would improve as more people began paying lower taxes next year. If they are right, the party could benefit just as lawmakers face voters in the fall.

House Speaker Paul D. Ryan, who spent most of his almost 20 years in Congress pushing for an overhaul of the tax code, said he was “excited” about making good on a core part of the Republican Party’s orthodoxy.

“We are going to launch next year this fantastic tax reform so that the American people can see how we can truly reach our economic growth and our economic potential,” Ryan said. In remarks before the Cabinet meeting, Vice President Mike Pence offered the kind of effusive praise that Trump is unlikely to receive very often, even in the wake of the tax bill victory.

For the president, passage of the tax bill could be even more important — depending on how people come to view the legislation. As a candidate, Trump pitched himself as a champion of working Americans whose interests had been forgotten or ignored by a political establishment that cared little about their fortunes.

If people conclude that the tax bill lowers their taxes, that could improve Trump’s dismal job approval rating. If they decide that rich people and corporations benefit most, the president could anger his own supporters.

“Trumpism, in the end, as a domestic policy, comes down to jobs,” Gingrich said. “As a baseline of the conversation, he has to produce a better economy for anything else he is doing to make sense.”