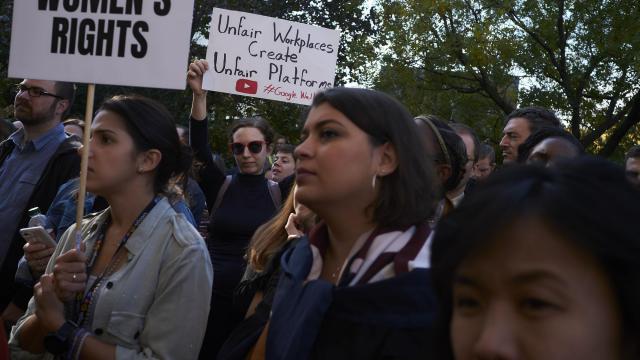 SAN FRANCISCO — Google said Thursday that it would end its practice of forced arbitration for claims of sexual harassment or assault after more than 20,000 employees staged a walkout last week to protest how the internet company handles cases of sexual misconduct.

Workers at Google had called for an end to arbitration, among other changes, as part of the walkout. The protest was prompted by a New York Times article last month that revealed the company had given a senior executive, Andy Rubin, a $90 million exit package even after it found he had been credibly accused of sexual harassment.

The shift was announced at a delicate time for Google. Apart from the scrutiny over its workplace culture, employees have pushed back this year over issues like an artificial intelligence contract with the Pentagon and the company’s exploration of a plan to relaunch its search platform in China. The employee protests over harassment, which followed the #MeToo movement, have been Google’s largest and most public.

In an email to staff Thursday, Sundar Pichai, the chief executive, said he was altering the sexual harassment policies because “as CEO, I take this responsibility very seriously and I’m committed to making the changes we need to improve.”

“We will make arbitration optional for individual sexual harassment and sexual assault claims,” he added.

Pichai also said Google would overhaul its reporting process for harassment and assault, provide more transparency to employees about incidents reported to the company and dock employees in their performance reviews if they do not complete sexual harassment training.

The company did not address some other demands by workers, including that it make its internal report on harassment public and put an employee representative on the board. It did not include temporary workers, vendors and contractors in the changes. Google said it would still require suppliers to investigate complaints raised among contractors.

At a companywide meeting Thursday, Eileen Naughton, Google’s vice president of people operations, and Danielle Brown, its chief diversity officer, presented the changes announced by Pichai, said two people who attended and who were not authorized to speak publicly.

Then Naughton and Brown, along with Susan Wojcicki, chief executive of Google’s YouTube, and Ruth Porat, Google’s chief financial officer, answered questions from employees, the people said. Pichai attended, but Google’s founders, Larry Page and Sergey Brin, who sometimes appear at staff meetings, did not.

The meeting lasted over an hour, the people said. Some workers asked why contractors did not get the same protection from harassment as full-time employees. In an answer to another question about how to change Google’s executive culture, Urs Hölzle, a senior vice president and one of the earliest employees, urged staff to view executives as individuals and not as one group, the people said.

Another employee said Pichai also seemed dismissive of the idea of an employee representative on the board. Pichai said that was a decision for the board to make, the person said.

After The Times reported on how Google had generously treated executives accused of sexual misconduct, Pichai and Page apologized to employees. Pichai also said that Google had fired 48 people over two years in response to claims of harassment and that none had received an exit package.

But their statements did little to quell growing employee anger. Many workers expressed their unhappiness on internal message boards and in meetings, as well as on Twitter and other social media. Some began to organize a walkout.

On Thursday last week, around 20,000 Google employees walked out of work across the globe — including in Singapore, in London and at the company’s headquarters in Mountain View, California — to show their dissatisfaction. They chanted slogans such as “Stand up! Fight back!” Some also held signs that said “Time’s Up” and “Don’t be evil, protect victims, not harassers.”

The employees also listed their demands. The call for more transparency was spurred by how Google often handles internal complaints through its employee relations department, which is staffed by many employment lawyers. Current and former employees have said complainants are often not told about the details of subsequent investigations, while some said they did not know they were being investigated by employee relations until questioned about what actions they had taken.

Google’s employment contract also required employees to deal with any grievances with the company in private arbitration. Arbitration, a common practice among technology companies, largely happens behind closed doors and can involve confidentiality clauses.

The practice has come under criticism, especially as it relates to sexual harassment, because it limits workers from speaking out about their experiences. Microsoft and Uber recently ended arbitration in cases of harassment and assault so that employees do not have to choose between speaking freely about what happened and resolving them with the company.