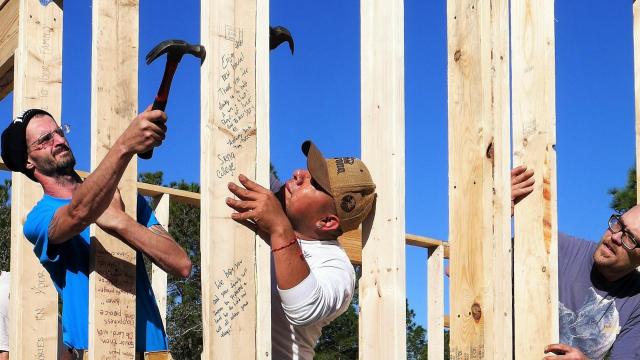 Hampstead, N.C. — Tony Thurston is a working man whose deeds speak louder than his words.

At the dedication of his family's new home in Hampstead on June 23, he struggled with his emotions before, almost bashfully, thanking the people of Cape Fear Habitat for Humanity and the many volunteers who had worked on the house.

So it fell to Jane Roberson, the Habitat affiliate's director of homeowner services, and Steve Spain, the executive director, to make sure the crowd who had gathered inside the house on a sweltering day knew what Tony and his wife Michelle had done: Put in 465 hours of "sweat equity" into this and other Habitat homes, well above the 400 hours that Habitat requires from a client family.

"All the way through it you have just kept working toward this goal," Spain told the Thurstons. 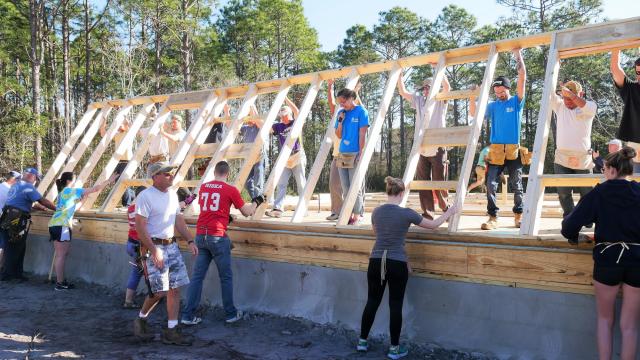 Tony Thurston is a professional wallboard contractor, and Spain quipped that he is "really disappointed to lose my drywall guy" who had also done wallboard work on other Habitat homes.

"These are always my best days at work, and now it's my double best day."

The house on Frampton Court in Hampstead is in a modern neighborhood of large lots with substantial homes, and the Thurston home fits right in. The house was built with the aid of the SECU Foundation, which has put up $10 million with the goal of building a Habitat for Humanity home in each of North Carolina's 100 counties over three years.

"The SECU Foundation is an incredible partner for Habitat throughout the state," Spain said. "I serve on statewide Habitat board, and we are just thrilled at this partnership."

The SECU members' gift – members donate a dollar a month (more if they choose) in service fees to fund the Foundation – is part of an outpouring of generosity from many who give of their time and talent to make the dream of homeownership real for so many.

More than 100 of those givers in this case were college students who came to the Wilmington area for five weeks in February and March to build homes during their spring break.

Chris Teeter, volunteer coordinator for the Cape Fear Habitat affiliate, said these students gave up partying over spring break to "invest their time and resources into leaving their mark on New Hanover and Pender counties."

Each weekday morning the teams arrived to work on everything from framing walls to laying sod. The students spent a week working alongside Habitat staff, regular volunteers and future Habitat homeowners. Churches and businesses provided lodging and lunches.

Memories of those eager young volunteers live on in the house that will be home for Michelle, Tony and their two young children: Nearly every college student, as well as other volunteers, wrote words of encouragement, poetry or Scripture on the studs of the walls before Tony and his crew put their skills to work and covered the studs with smooth walls. 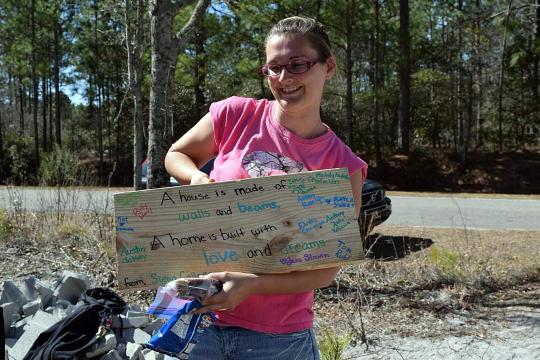 "We can't see it, but we have taken pictures," said Sylvia Wilkins, a member of the SECU Foundation advisory board. And, Wilkins said, the good wishes will live on within those walls.

But Michelle did keep one board, covered in signatures and quotes, to remind her and her family of the devotion of the Habitat for Humanity volunteers and staff who helped them build a house and make it a home.