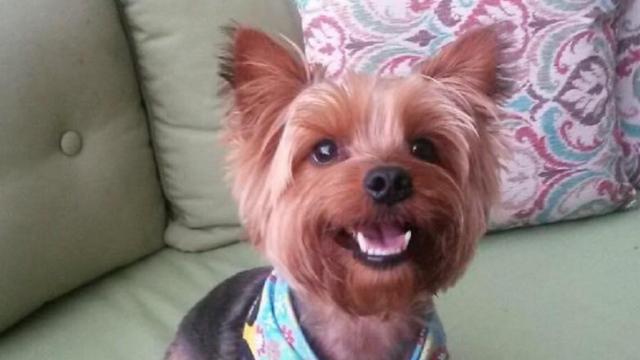 Jill Cobb had fallen in love with a little Yorkshire terrier named Dyson that was brought into the practice where she worked, but she never imagined she would one day bring that dog home.

After several visits to the practice where Cobb worked, Dyson’s owner called the vet to say that she couldn’t handle the animal and would be taking him to a shelter unless she could find someone willing to adopt him.

Cobb, who had lost her Australian cattle dog two years earlier, was the one who happened to answer that call and decided to seize the opportunity.

“I just thought he was the cutest thing,” she said. “It was meant to be.”

In the three and a half years since she adopted the dog, which she and her wife renamed Winslow, he has become a part of the family and serves a vital role helping Cobb cope with her anxiety.

Cobb said she had Winslow trained as a support dog after she underwent surgeries for her neck and back and had her hip replaced. His motivation to work for food during his training, she said, led her to infer why his previous owner gave him the same name as a vacuum cleaner.

“I’m just so glad we were able to get him and give him a great home where he’s comfortable,” Cobb said.

Winslow loves to go out and about with the couple, who often dress him up in outfits to fit the occasion or activity, including donning a leather jacket to go on motorcycle rides. 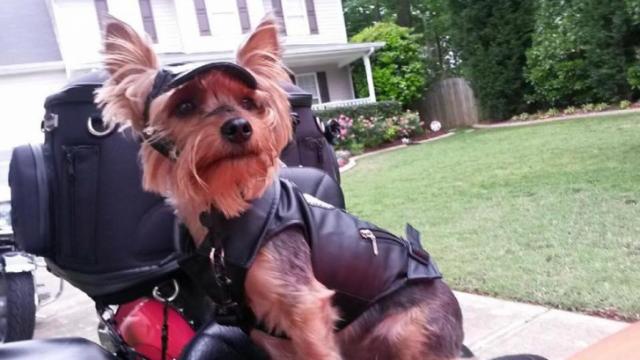 “I think he actually has more clothes than me,” Cobb said.

Cobb said Winslow has his own dresser, which he excitedly runs to when she tells him that it’s time to get dressed.

A veterinarian technician for 27 years, Cobb had previously rescued several other animals. She got one of her cats after finding what she thought was a mouse while sweeping out a horse stable more than two decades ago.

“I was like ‘that’s not a mouse, it’s a kitten’ and I ran off to the vet,” she said of finding the animal.