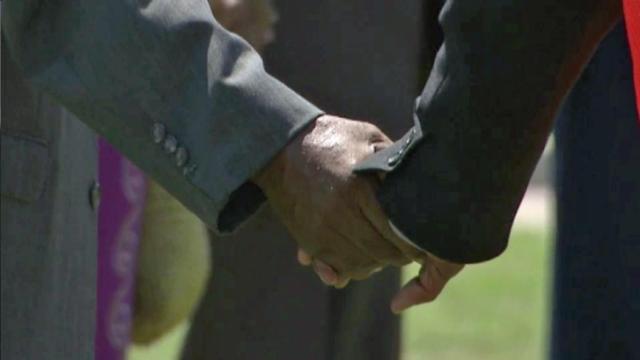 Goldsboro, N.C. — Reverend William Barber has been the face of the Moral Monday movement, crusading for social and political causes, but last week he saw violence come to his back door when a young man was murdered in a neighborhood behind his church in Goldsboro.

Barber, who is also the President of the North Carolina NAACP, has made a name for himself with boisterous rallies and marches, but Sunday he spoke at a rally that took on a quiet tone.

“We will see lives healed,” said Barber as the crowd echoed his words. “We come against the spirit of killing.”

Barber is the pastor of the modest, 130-year-old Greenleaf Christian Church that rises next to the Alpha Arms apartment complex, where Perez McDuffie, 28, was shot and killed Wednesday afternoon.

“This apartment is not the mission field, it’s us. This is us, it’s our community,” said Barber. “And when we heard about the killing, we said that we would leave our worship service today and come straight into the community. We believe the church has got to get out of the sanctuary.”

Carlos Darden, 40, has been arrested in the shooting death of McDuffie, but that doesn’t mean that residents are not still concerned.

Tanesha Boykin, mother of six-year-old Shadiyah, says the incident make her feel as though her neighborhood is one that the world could write off. She said that seeing friends and neighbors die in violent incidents threatens her sense of security as a mother.

“It makes me want to pack up and leave” said Boykin. “I really don’t want my daughter growing up around violence and stuff like this.”

She said that having well-dressed people, fresh from the pews, gathering outside her door and speaking out against violence sends a special message.

“Just to show that we’re not out here alone, that we do get people that are willing to help us, willing to pray for us, to help us come together as one,” said Boykin.

Church member, Tyrone Gardner said Sunday’s prayer rally was intended to show people that there is refuge from the violence and a chance to change.

“We just wanted to let people know that we love them, and they’re welcome where we are,” said Gardner.

In a move that was neither political nor theatrical, the group joined together in a prayer circle to help keep violence from becoming too familiar.

“I think what it does is it lets people know there are people in the community that still support them,” said church member, John Barnes. “We’re not going to throw them away because of what happened. We’re not going to abandon them.”