Going Over the Top With a Giddy Bounce 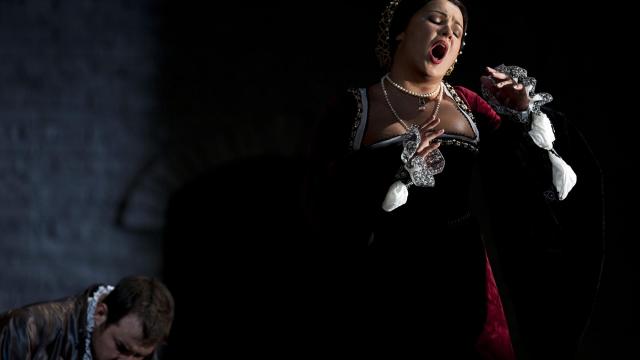 NEW YORK — Opera fans traditionally have needed to head to theaters to catch their favorite divas. But those who worship Anna Netrebko, the queen of the Metropolitan Opera, need only whip out their smartphones.

This Russian soprano, who will appear Sunday afternoon for her solo recital debut at Carnegie Hall — originally set for 2006, postponed to 2011, then pushed back yet again — has an Instagram account much like the interior of a very rich, very well traveled, possibly colorblind teenager’s school locker.

Here she is, basking in Central Park with her tangerine Ralph Lauren “Ricky” bag. Over there, crashing the Dubai Mall in a burgundy muumuu and harem slippers. Yodeling in Quechua fabrics at the cactuses of Peru. Pedaling around Venice astride a pastel two-wheeler. Traipsing through downtown Moscow in furs; at home prepping hamburgers.

In Netrebko’s Technicolor world, broadcast to some 400,000 followers, costume is daywear, and social media is an exclamatory playhouse even grander and more neon-bright than the productions she headlines.

This is how Netrebko, 47, has become the most captivating opera singer of our time: She defines “extra.” She pushes herself to her limits, and then goes a step further, usually in purple mink. She embodies an excess that lies at the molten core of opera, and which spills into the images she unloads online.

How many of us have longed to don a poncho and hot pants for an excursion to Denny’s? Or known deep in our hearts that the only acceptable fabric for a sweatshirt is lamé? Netrebko brings the thrill of possibility to all these reveries, which for her seem like not at all an act; she manages to make being over-the-top a vehicle for authenticity.

She wasn’t always a larger-than-life presence. Her voice was small and chirpy when she was a 20-something no-name from Krasnodar and won the Glinka singing competition. Her big break came when conductor Valery Gergiev began featuring her in the mid-1990s in lyrical ingénue roles like Susanna in “Le Nozze di Figaro” and Louisa in “Betrothal in a Monastery.” Early coups in North America — such as the title part in Glinka’s “Ruslan and Lyudmila” and Natasha in the Met’s first production of Prokofiev’s “War and Peace,” in 2002 — played to her image back then, as a waif from the steppes. A press canard about her having been discovered while scrubbing away as a janitor at the Mariinsky Theater in St. Petersburg cemented her reputation as the ultimate Anastasia type.

Nevertheless, these early appearances dazzled with their decidedly self-possessed and canny approach to the material. A highlight of her 2006 “Russian Album” with Gergiev is an aria she has never performed onstage, from Rachmaninov’s short opera “Francesca da Rimini.”

The heroine, at first piously reluctant to accept the advances of her husband’s younger brother, eventually succumbs to adulterous desire. Just as the emotional transformation reaches its climax, the music startles with a shimmering, introspective diminuendo that drifts down from the heavens, a passage Netrebko navigates with trembling and bewitched delicacy.

Critics will argue, but her metamorphosis from baby chanteuse to true diva likely occurred around 2005, at the Salzburg Festival, where she starred as Violetta in Willy Decker’s stark and sexy staging of “La Traviata,” a performance as feverish as the scarlet cocktail dress in which she twirled. She took another step into legend with her 2014 Met appearance as a platinum-blonde Lady Macbeth.

In Italian, the voice simply pours out of her. Witness her “Miserere” from Act 4 of Verdi’s “Il Trovatore,” in which she attempts to free her lover from imprisonment with tidal rushes of sound. As Donizetti’s doomed Anne Boleyn at the Met in 2011, her mad scene cabaletta was imbued with the kind of crapulent ardor one might encounter at a truck rally or in line for a Nintendo Switch. She is that good at believable madness.

One of my favorite moments of her Met career was an accident at a 2012 dress rehearsal for Massenet’s “Manon.” (Luckily the incident has not left YouTube.) In the St. Sulpice scene, Netrebko is about to seduce her Chevalier behind the altar, when she spies a Bible that has been mistakenly left near the pillows by her co-star, tenor Piotr Beczala.

The propulsive force with which this Manon responds — not daintily plucking but brutishly hurling the Bible off the bed — is more than mere camp delight. It also gives the heroine an emotional intensity and mettle unmatched by practically any other soprano. This is a quality that opera lovers tend to look for and cherish. Watch her and Beczala fall off the bed together at the end of that scene and tell me he is not feeling it.

She’s had occasional wobbles, like her awkward effort to make it through the treacherous aria “Ah! non giunge,” from Bellini’s “La Sonnambula,” in London in 2007. But behind her failed fireworks lies conviction, and even when Netrebko is clearly dying for it to all be over so she can go home and post photos of her calamari, there is lovable passion to be found in her rendition.

Politically, her blunders have been harder to explain away. In April she walked back statements that seemed to place blame on victims for their sexual assaults. In 2014, despite claims that she would “have nothing to do with politics,” she posed for a photo with a leader of the East Ukrainian separatist movement, a move that has to this day made picketers a common sight outside her recitals.

You get the sense that she is most comfortable — most herself — when she can soar above and beyond the everyday. Whether that’s a good thing is an open question. But it’s why her performances feel like an exquisite form of escape, why many of us will be there at Carnegie on Sunday. And it is why we keep coming back to her Instagram, too: the Day-Glo extremity captures what we love best about the absurdly heightened, not unridiculous world of opera.