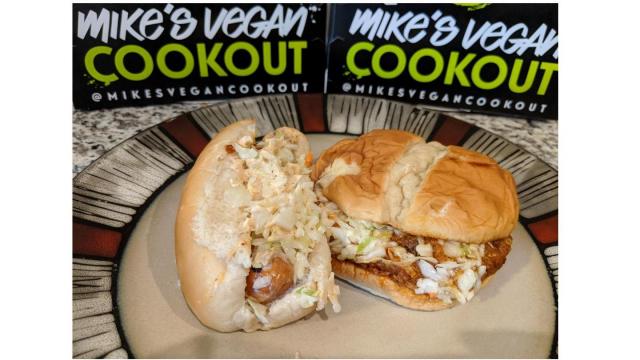 In an effort to support small businesses during the pandemic, I've been buying from or using at least one local business every week for months.

In this new Going Local series, I'll be profiling the Triangle area small businesses I have tried and loved and highly recommend.

Full disclosure: I have not been paid or given any free products of any kind to write these posts. The businesses did not even know I was considering writing about them until after I received the services.

My oldest daughter and I discovered Mike's Vegan Cookout in October 2020. She is a vegan and when I saw that there was a local food truck that offered an entire vegan menu, I knew we had to try it.

Whether you are a vegan or not, Mike's Vegan Cookout offers some truly delicious cookout-themed options. I am so impressed that everything they serve is vegan because it really doesn't taste like it. Read on for reviews on the specific menu items my daughter and I have tried and some details about how they got started in the summer of 2019.

All About Mike's Vegan Cookout

I reached out to the company for some information about how the food truck got started and they provided a great summary:

"Mike’s Vegan Cookout, which was formerly known as Mike’s Vegan Hotdogs, started off as a food trailer in Chapel Hill, North Carolina back in July of 2019. At the time, Mike was working 3rd shift hours in an Amazon warehouse as a dispatcher. Possessing the desire to be self employed and motivated by the exciting news of his daughters birth just 4 months later, Mike knew he had to maximize his gift to provide the best life possible for his family.

He took the chance and gave it his all, “all money in” as he says. He operated the trailer with the support of his fiancé and family members for a few short months before deciding to close Mike’s Vegan Hotdogs. As he diligently worked to navigate through this brand new business endeavor, with little to no experience in the food truck industry, a sustainable profit unfortunately was not met. But the story doesn’t end there.

With the help of a childhood friend and soon to be business partner, together they worked to come up with the idea to completely revamp the business which resulted in Mike’s Vegan Cookout!

The big green and black truck, decorated with vegan facts and slogans, was set to open right at the beginning of the pandemic. Venturing to different cities through the Triad and Triangle 5 days a week in Raleigh, Greensboro, Durham, Winston-Salem and Burlington, MVC quickly grew into a sensational hit. Gaining most of his customer base through social media and by posting location information every single day, Mike was able to provide to the communities of the cities visited, new options for delicious and incomparable vegan comfort foods to fans and supporters, including supporters who traveled over 4 hours to experience his dream turned into a reality.

Mike says “I love being able to make people happy with some of my favorite foods that I myself loved before going vegan 3 years ago” and that’s exactly what he continued to commit to."

Their first truck has been going back and forth between the Triangle and the Triad and they have now opened a second truck, located in Charlotte, North Carolina. Here in the Triangle, the truck currently visits Cary, Durham, and Raleigh once per week.

You can see the weekly schedule, menu items, updates and more on their Instagram and Facebook pages.

You can also see their menu HERE. 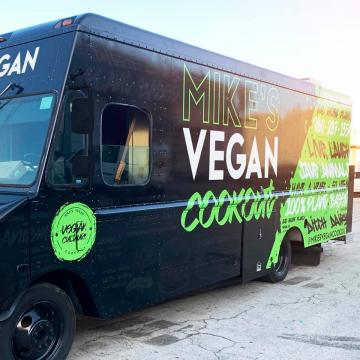 The first time we tried Mike’s Vegan Cookout in October 2020, I had the vegan BBQ Sandwich which includes BBQ (made with soy), BBQ sauce and coleslaw on a Hawaiian Bun. It was excellent! I have always enjoyed pulled BBQ chicken sandwiches and this was just as good in my opinion. And if you are having a BBQ sandwich, there needs to be slaw, of course. The Hawaiian bun really takes it up another notch. The cost is $10.00 for the sandwich. It you want to add fries and a drink, it's another $2 for a total of $12.

My daughter had the Carolina Burger and totally loved it! She has been a vegan for a couple years now and finding a food truck with so many delicious vegan options was truly exciting for her. Each time we get MVC she tries something different and she has never been disappointed. The Carolina Burger is $13.50 and for $2 more, you can make it a Combo Meal with fries and a drink.

Most recently, we picked up Mike's in Cary when they were parked at Lantower Weston Corner Apartments in late December 2020. I got the Carolina Hot Dog for the first time. It's topped with homemade vegan chili, vegan cheddar cheese, coleslaw, diced onions and special sauce and it was fabulous. The actual hot dog tasted great and wasn't rubbery like some vegan hot dogs I have had in the past. The hot dogs sell for $6 each, but if you get 2, they are 2 for $10, which is what I plan on doing next time. Confession: I also got the BBQ Sandwich, again, and had it for dinner! You can see both menu items in the photo at the top of the page.

My daughter had the Columbiana Hot Dog with pineapples, crushed potato chips, pepper jack cheese (vegan) and special sauce. She said the combination of the sweet pineapple and the crunchy salty potato chips worked really well and she is definitely going to order it again. But, in her quest to try every single item on the menu, she is getting the What The Cluck vegan chicken sandwich next time.

I have never in my life tracked down the location of a food truck, but every week, I now look to see when Mike’s Vegan Cookout will be in Cary. 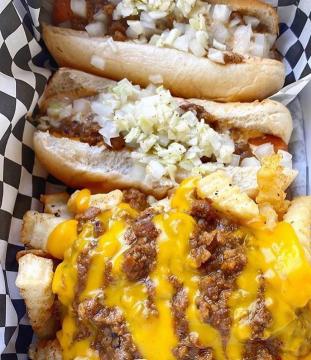