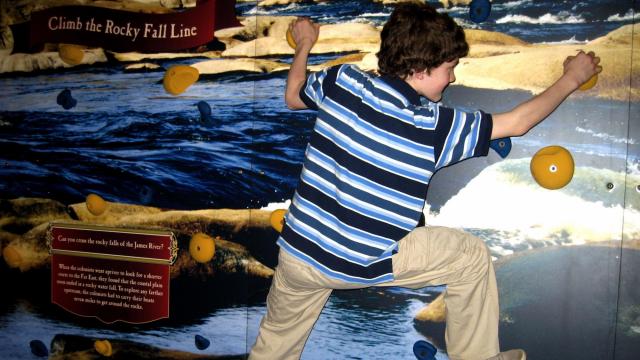 Do you have the skills to survive America circa 1607? That's the year settlers arrived on our shores and formed Jamestown, the first permanent European settlement. Less than half would live the full year.

American Adventure, a new exhibit slated to open June 18 at the N.C. Museum of Natural Sciences, will test visitors' skills and explore what was necessary for survival.

This highly interactive exhibit was created by Minotaur Mazes, which brought the popular exhibit Rainforest Adventure to the museum in 2014. That exhibit included monkey bars, a climbing piece and other hands-on pieces that made for a really active exhibit for kids.

American Adventure appears to offer that same kind of action. Visitors will be able to embark on a "survival maze," testing their primitive survival skills as they explore more than two dozen challenges. They include a zip-line and climbing wall!

The exhibit will run June 18 to Sept. 7. Tickets will be $5 and free for museum members. There also will be a special $7 ticket that pairs the purchase for American Adventure and a 3D movie on-site.

A grand opening celebration is planned for June 18 and will include a discussion on American Indian skills and survival skills such as rope-making and navigation.

I'm looking forward to checking this one out!