Glossier Will See You Now 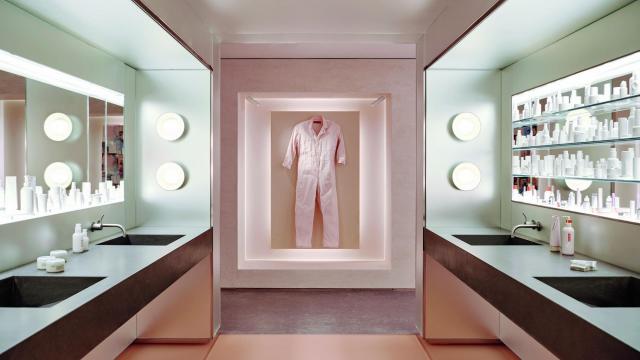 NEW YORK — The clean, well-lighted place is glowing. Even from the sidewalk, even without windows you can see through. There it is on Lafayette Street, a salt lamp of retail real estate, a frosted beacon. There is a name-printed banner flying above, but if you are coming here, you probably don’t need it. You already know, deep in your pores, that you are at the new Glossier flagship store.

Glossier, if you don’t have a friend, a colleague, a daughter or a niece who swears by it, is a digital-first beauty company that was founded in 2014. It speaks to its customers as a friend would and sells its friends lots and lots of jelly cleanser and Boy Brow (essentially mascara for your eyebrows), which is not strictly speaking a new invention, but has nevertheless shot this product to top-selling status.

Emily Weiss, the founder and chief executive, is as close as we’ve come to a millennial Estée Lauder, but unlike Estée Lauder, Glossier has bypassed department stores altogether. Ninety percent of Glossier’s revenue comes from online sales.

But even many of those who can (and do) order online found the option to shop in person irresistible, as Glossier discovered when it opened a shoppable showroom space here, in what was then its office building, in 2016. Lines formed down the street; more than half a million customers came through, the company said.

“Once they got upstairs, they didn’t shop and go,” Weiss said. “They really hung out, sometimes for hours. At one point, someone even ordered pizza.”

So for Glossier’s second and largest permanent shop, which opens on Nov. 8, Weiss and her team wanted to offer an experience. Glossier is a social club for the like-minded, an auto-body shop for the human body. (The staff, called offline editors, wear mechanic’s jumpsuits, hand-dyed in the hue that Glossier helped to standardize as “millennial pink.”) It offers what are quickly becoming the three Cs of the digital era: community, conversation and content.

Glossier is not optimized for quick shopping. (For that, you can order online and pick up.) The main shop space is up a winding staircase, in a womblike haven. Once there, customers are encouraged to try anything and everything on, to chat with their “editors,” their friends and the person at the next makeup mirror.

All of the products are arranged within easy reach at communal tables, with sinks in an ad hoc bathroom (the “wet bar”) for washing them all off to try again. In an adjacent room, human-size tubes of Boy Brow — Glossier’s own version of Claes Oldenburg sculptures — stand upright in front of mirrors, waiting for selfies.

“It’s encouraging people not to shop the space but use the space,” said Christine Gachot, a founder of Gachot Studios, the interiors firm that worked on the design with architecture studio PRO.

“We’re not focused on selling you stuff,” she said. “We don’t have people working on commission. When you’re in such a transactional time — a time of Amazon having engineers working on cross-selling and upselling and better and better algorithms to get you to buy stuff — it’s really important to create spaces and experiences that help you feel things.”

Asked to describe the feel of the space, Weiss settled on “adult Disneyland.”

Like Disneyland, Glossier offers an otherworldly experience, where frosted windows keep out the street views and the warm light and pinkish ambience are keyed to flatter.

But Weiss does not dream of a retail empire. There are no plans for future permanent locations, though there will be some pop-ups. Her bigger investments are in technology and e-commerce, including a Glossier-owned social platform.

“We think a lot about Apple as we think about our design and experience,” Weiss said.

Those are the heights of Glossier’s ambition, fueled by its latest round of funding: $52 million. (It has raised $86 million since its founding.) Weiss imagined her beacon as a New York landmark-to-be, drawing well-moisturized pilgrims the world over. Imagine the itinerary!