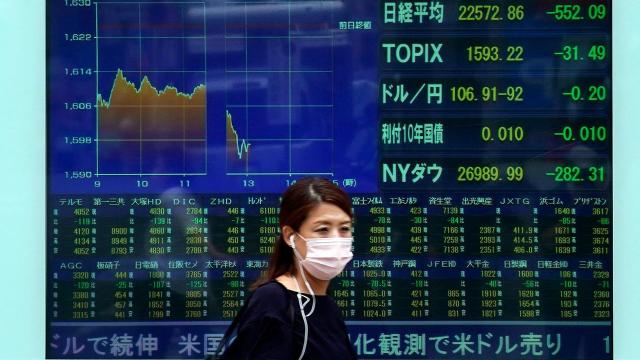 CNN — The stocks mega-rally hit a roadblock: A somber economic outlook from the US Federal Reserve and the 2 millionth coronavirus case in the United States has investors questioning whether they had boosted the stock market too far, too fast.

US stocks plummeted into the close, with all three indexes recording their worst performances since March 16 -- when the stock selloff over worries how the pandemic would affect the economy was at its worst.

The S&P 500 ended down 5.9%, closing at its lowest total points since late May. Only one S&P stock, grocery chain Kroger, closed in positive territory.

The Nasdaq Composite, which hit all-time highs on the first three days of the week, closed 5.3% lower. The index recorded three all-time highs in a row at the start of the week and finished above 10,000 points for the first time in history Wednesday, but on Thursday it fell back to a level not seen since late May.

The rising number of coronavirus cases in the United States has unnerved Wall Street. A second wave of infections could force many businesses to close again just after they reopened.

Treasury Secretary Steven Mnuchin said the US economy wouldn't be shut down again despite the rising case count.

Mnuchin said more than a trillion dollars would be pumped into the economy over the next month.

Although Powell acknowledged that the May jobs report, which showed a 2.5 million jobs added to the economy, was a welcome surprise, he noted that many millions of Americans will never go back to their jobs and could remain unemployed for years.

Another 1.5 million Americans filed for first-time unemployment benefits last week, data from the Department of Labor showed Thursday. The number of continuing jobless claims, counting people who have applied for benefits for at least two weeks in a row, remains above 20 million.

The gross domestic product -- the country's broadest measure of the economy -- is expected to plummet 6.5% this year before rebounding.

The central bank is expected to keep its foot on the stimulus pedal for the foreseeable future. The central bank doesn't expect to raise interest rates this year or in 2021, according to the so-called dot plot, which maps out committee members monetary policy expectations. Even in 2022, only two policy makers expect a hike.

Usually low interest rates are good for stocks because it gets cheaper for companies to borrow money. But at the moment, low rates for longer also mean that the economy won't be back on its feet for a while.

President Donald Trump said in a tweet that the Fed was often wrong, adding "We will have a very good Third Quarter, a great Fourth Quarter, and one of our best ever years in 2021."

Since Memorial Day on May 25, the number of coronavirus hospitalizations has gone up in at least a dozen US states, according to data CNN aggregated from the Covid Tracking Project. They are Alaska, Arkansas, Arizona, California, Kentucky, Mississippi, Montana, North Carolina, Oregon, South Carolina, Texas and Utah.

As states across the country reopen their economies, people are being forced to live alongside the virus. A closely watched coronavirus model from the Institute for Health Metrics and Evaluation at the University of Washington was updated on Wednesday is now forecasting nearly 170,000 coronavirus deaths in the United States by October 1.

"If the US is unable to check the growth in September, we could be facing worsening trends in October, November, and the following months if the pandemic, as we expect, follows pneumonia seasonality," IHME Director Dr. Christopher Murray said in a statement.

The number of global cases also continues to tick higher, with nearly 7.4 million confirmed infections reported, according to Johns Hopkins University. Brazil, Russia, the United Kingdom and India have the most cases after the United States. More than 415,000 people around the world have died.

Many investors had been betting on a quick recovery for the world's largest economy.

The S&P 500 surged into positive territory for the year earlier this week even as economists officially declared the US economy to be in recession. The Nasdaq topped 10,000 points for the first time in history Tuesday.

On Thursday, the S&P was negative for the year again and the Nasdaq was back below the key threshold.

But the elevated number of coronavirus cases in the United States coupled with dire economic projections from experts including the US central bank suggest continued pain for companies and workers. The bleak outlook may now be getting harder to ignore.

Stephen Innes, chief global markets strategist at AxiCorp, said Thursday that markets are having trouble digesting headlines that indicate new virus outbreaks in the United States. "A secondary outbreak is nothing to sneeze at," he said.