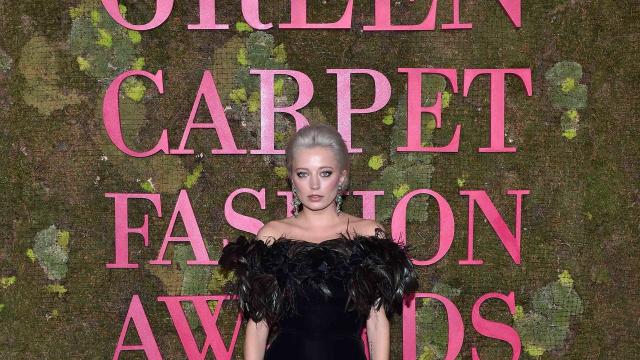 MILAN — Milan has always given good razzle dazzle when it comes to accessories. Nevertheless, the collections on display over the past week here suggest that Italian designers feel their customers are in need of a little more sparkle in their lives — without compromising on comfort.

At René Caovilla, for example, a brand that forged its name on bejeweled footwear, there were exquisite sandals dusted in glitter with spaghetti-thin rope straps, or denim sliders, scattered with rhinestones and pearls.

Across the road, at O Jour, flats also were the name of the game: A standout pair had a rainbow-colored splash that washed over the toes. And at Casadei, which is celebrating its 60th anniversary, acrylic paillettes with silver bolts in various shades were combined for chunky silver block heels, creating a silhouette with echoes of a glamorous 60s-style bootee.

Meanwhile Bulgari, the Italian jewelry house known best for its use of brightly colored stones, had opted for a blackout this season, with a collection of handbags clearly intended for after dark. From the house’s classic Serpenti style, embellished with shiny precious metal work in snakelike twists, to clutches with mirrored lightning bolts, along with shimmering backpacks and tasseled bucket bags, it was a shameless celebration of ‘80s glam rock vibes.

Few, however, had gone to town on the theme as much as Jimmy Choo, which intends to introduce what it calls a “diamond sneaker” for both men and women on Oct. 25. According to its creative director, Sandra Choi, there are roughly 10,000 crystals embedded in each pair, which has a clear latex sole and a 1.2-inch platform for added lift. With sportswear currently the fastest-growing category in luxury, its motivations for the style are crystal clear.

Even as Jimmy Choo took an unashamedly maximalist approach to the style this season, so did Giuseppe Zanotti, who offered a black Michael Jackson tribute high-top, complete with silver zippers, buckles and red rhinestones on the side of its rubber soles.

Sneakers continue to be the biggest single footwear trend among accessories brands. On the runways, sporty footwear with a touch of high glamour could be seen at the likes of Roberto Cavalli, where models wore wide-soled shiny silver lace-ups to match metallic macs.

Elsewhere, there were pumped-up two-tone kicks with neon laces at Versace, and simple black canvas slip-ons at Prada (also, a flat open-toe shoe style that looked like a retro sports sock).

Agnona, unsurprisingly, took a more understated approach (its chunky sneakers came in neutral earthy shades), while at Emporio Armani, there was a classic tennis shoe, in white navy or gray.

Sometimes — especially in Italy — true beauty can be found in simple design, perfectly made. And for those who don’t necessarily want bells and whistles when it comes to stylish accessories, there was much to be found in Milan this season.

Take Loro Piana, for example, which had butter-soft crisscross sandals in navies, browns and aquamarine, either flat or with a low heel and with a relaxed knot at the ankle bone.

Or Gianvito Rossi, who offered elegant court shoes with a new hidden rubber sole for additional comfort, and Sergio Rossi (no relation), where there was a white slingback with sculpted kitten heel that was as chic as it was practical.

Furla, which presented a new logo and men’s and women’s collections together for the first time (celebrating with a piazza party full of music, Aperols and delicious ice cream), offered an ode to La Dolce Vita with its new Mediterranean bag. The large tote, made on old looms from raffia jacquard, or crochet wool, and decorated with nautical motifs, was center stage.

And at Bally, there was the Cecyle, a quilted bag named after the wife of one of its co-founders, that took its roots from a 1990s design recently rediscovered in the brand’s archives. Other inspirations came from 1970s color photography, and many of the shoes had a ribbon-style Bally logo from a 1940 Reynold Vuilleumier advertising poster.