Raleigh, N.C. — One side of Glenwood Avenue between Crabtree Valley Mall and Blue Ridge Road will be closed until Friday after crews hit a gas line while repairing a water main break on Monday night.

Cold weather caused the water line to rupture before 6:30 a.m. on Monday, prompting police to block eastbound Glenwood Avenue in front of the Interstate-440 interchange, diverting traffic onto Blue Ridge Road. Around 11 p.m. on Monday, crews at the scene hit a gas line, further complicating the issue.

According to the city, repairs to the infrastructure and repaving work could last until Friday. Drivers should plan to avoid the area in front of the mall and can expect heavy delays this week, particularly during rush hour.

On Tuesday, Raleigh police told WRAL News crews were trying to find the source of the leak and may have to tear up Glenwood Avenue to find it. Officials were concerned and said there couldn't have been a worse spot for something like this to happen. 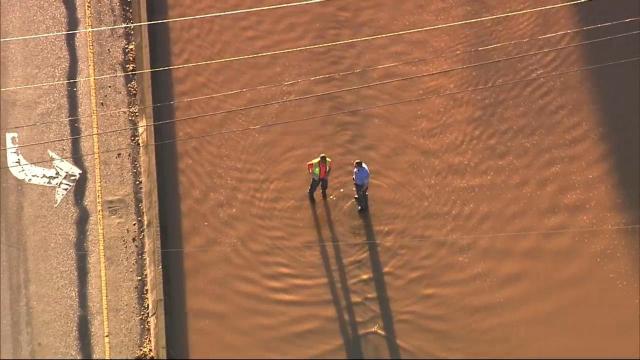 "The repaving part is usually the piece that takes the longest," said Ed Buchan, senior utilities analyst for Raleigh's Public Utilities Department. "The repair can usually happen fairly quickly. It’s going to be an extensive effort to repave this section."

"I realized the turn that I usually make off of Creedmoor [Road] onto Glenwood was closed, so I zipped behind the mall, assuming that would be open, but that’s not open," driver Jessica Jameson said. "So now I’m not even sure where to go."

The state Department of Transportation recommended that eastbound drivers turn right on Creedmoor Road and take that to Wade Avenue to head downtown or access Interstate 440. Meanwhile, drivers on Lead Mine Road should cross Glenwood onto Blue Ridge Road, turn left onto Glen Eden Drive and then left again onto Ridge Road to access I-440.

Buchan said the cast iron water line dated to the 1940s or 1950s and likely burst due to colder temperatures. 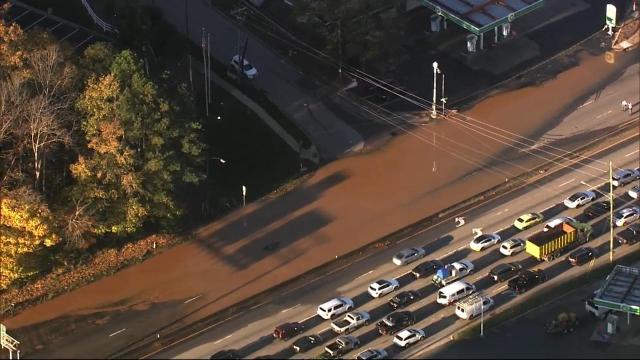 "That's a very brittle material," he said. "Time and recent temperature changes likely led to this morning’s dilemma. When there is a temperature change for whatever reason, they don’t like that, and they can break.

"In my experience, this is certainly one of the more substantial [ruptures] simply because of the location and the fact that we have four lanes closed of a major highway," he added.

The DOT estimates that 54,000 vehicles travel on Glenwood Avenue near the mall daily.

Raleigh plans to spend $400 million over the next decade replacing more than 100 miles of aging water and sewer lines, Buchan said.

"This is evidence of what happens when you have some older infrastructure," he said. "We have a plan to replace it, and we’re doing that, but sometimes, we just don’t get to it soon enough."

The repaired line "could likely break again," he said, which will move it up on the city's priority list for replacement.

"We have evidence that it’s fragile," he said. "Because of the size, we will probably replace it sooner rather than later."

The road closure didn't stop people from shopping at nearby Crabtree Valley Mall.

"We've actually had one of the best weekdays that we've had since all of this has been going on," said Blake Ticknor, the manager at Ticknors men's clothing shop.

"Surprisingly, traffic was flowing into the property nicely, and people figured out a way to get in and get here," said Crabtree Valley Mall Senior General Manager John Pezzulla. "Actually, we had a bigger Monday today than we did a week ago."