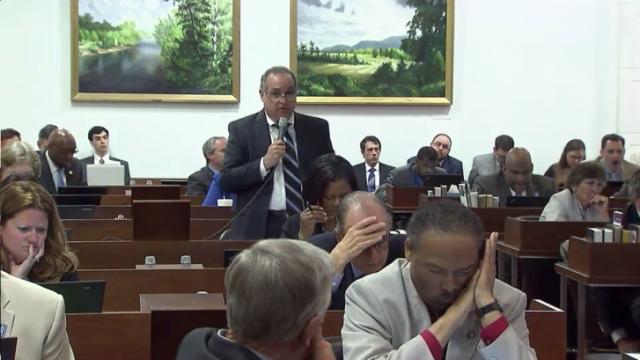 Raleigh, N.C. — After Rep. Rick Glazier, D-Cumberland, announced this would be his last week as a member of the state House, his colleagues heaped praise on him for a legislative career marked by deep legal knowledge and civility.

The comment was not out of line considering that, during speeches marking his departure, Rep. Verla Insko, D-Orange, compared Glazier's respect for each individual to the Apostle Paul, while Rep. Paul "Skip" Stam, R-Wake, said a biblical verse about the Old Testament figure Daniel was apt.

"They could find no corruption in him, because he was trustworthy and neither corrupt nor negligent," Stam quoted.

Glazier announced earlier this year that he planned to leave the General Assembly to take the helm of the North Carolina Justice Center, a liberal think tank that often tries to influence state government policy.

It is not unusual for lawmakers to joke, jibe and otherwise rhetorically fete members leaving the chamber. However, Thursday's remarks came from Republicans and Democrats alike, who said they appreciated Glazier's even-tempered approach, even when he was passionately making his case.

"You never took things personally," Rep. Nelson Dollar, R-Wake, told Glazier, adding that the Democrat was always an "incredibly welcome" ally when they did see eye-to-eye on an issue.

For his part, Glazier used his last speech on the floor of the House to urge his colleagues to continue serving as role models for the state and to use their positions of influence to help the state's needy.

Cumberland County Democrats are expected to pick Glazier's replacement as soon as this weekend. The replacement will serve the remainder of Glazier's term, which expires at the end of 2016.