By Tony Castleberry, Out and About contributor

Raleigh, N.C. — Improving herself — on stage, on her radio show, in life in general — seems to be a constant goal for stand-up comedian Nikki Glaser, and the fact that she isn’t always successful in that endeavor likely endears her fans to her even more.

Glaser, who headlines Goodnights Comedy Club in Raleigh this week, hosts the popular "You Up with Nikki Glaser" radio show Monday-Thursday mornings on Comedy Central Radio, and has built a well-earned reputation as one of the best comics in the business. Her debut album, "Perfect," pretty much lives up to its name. 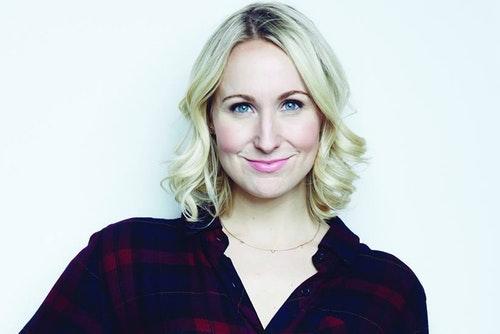 After landing a spot on "Dancing with the Stars" last year, the Cincinnati-born, St. Louis-raised Glaser was on her way to even higher show business heights, and then she was the first celebrity voted off the show.

“The worst thing I thought could have happened did happen,” Glaser said during a Tuesday afternoon interview.

Despite that very public setback, Glaser persevered, and one could argue she’s better off for it. As I learned during our interview and from being an avid You Up listener, Glaser didn’t dwell on the embarrassment of making such an early exit from the dance competition.

Instead, she took pride in the leap she was willing to take just by trying something most wouldn’t or couldn’t, and says she is grateful for the opportunity. If that isn’t proper perspective, I don’t know what is.

In addition to Dancing with the Stars, Glaser and I discussed the evolution of her radio show, why oversharing is one of her strengths, the connective power of comedy and more.

Tony Castleberry: Is there one major lesson or takeaway you feel like you got from your "Dancing with the Stars" experience?

Nikki Glaser: Yes, my biggest takeaway was, sometimes you take on something that is terrifying, and you think, “Yeah, this scares me and yeah, it’s gonna be challenging, but the worst thing that can happen isn’t likely to happen.” You do it because you’re like, “What’s the worst that could happen? Say I’m voted off first. That’s probably not gonna happen so I might as well do it because I’m not gonna be voted off first.” Sometimes, that does happen. [interviewer laughs] The thing that you fear the most when you take on something that is terrifying, sometimes that thing does happen and even when it does, you’re still OK at the end of it. The worst thing I thought could have happened did happen. I was voted off first. It was embarrassing. It’s not what I wanted. I hated it. I wanted to stay on the show. I was really upset. It was everything that I thought it would be in terms of like feeling bad. It took me about an hour of being upset, and then I was like, “OK, on to the next thing.” The thing that was scariest happened, and I survived it.

That’s what I learned but I also learned, don’t convince yourself when you do something scary that the worst thing won’t happen. Statistically, it will happen to some people and you had a one in 13 chance of being voted off first. You actually had a better chance because you’re a terrible dancer, and it happened. [interviewer laughs] Still, everything’s fine.

TC: It would have been easy for you to lash out or be negative but for the most part, you didn’t seem to take it that way. Were you surprised at how well you took it?

NG: I realized that, that’s what I signed up for. To be mad at something happening to me that happens every season is a ridiculous thing, and it’s just not how I felt about the show. Part of the reason I was so upset I left the show is because I loved it. I think a lot of people expected me to have a bunch of (expletive) to say and talk (expletive) about this dumb dancing show but it wasn’t a dumb dancing show to me. It was the best time of my life.

There was a part of me that was like, “Maybe if I say enough nice things about them they’ll have me back for like a losers show or something.” [interviewer laughs] There was also incentive to not badmouth a network that had been so good to me, until they voted me off. Ultimately, I would have said something bad about it had I felt bad about it. I just made peace with it. I was like, “OK, that was fun. I wish it would have lasted longer but I’m not gonna be like a bitter girl that got broken up with.” That’s never a good look.

TC: You Up is so good, and I think the show just keeps getting better. Does it feel that way from your perspective?

NG: Yeah, I think just the nature of doing something four days a week for two hours a day, you can’t not get better. Just because practice makes perfect. You find a better rhythm.

I really just enjoy it, and I think that is the secret to it. There were elements of the show that I wasn’t enjoying, and I changed things to make it so that I leaned toward a format and a type of discussion that I enjoy. It might not always be a show that has you doubled over laughing but that’s there anyway because I have funny people on. I wanted to lean more toward, “Let’s talk about real stuff and have a funny twist with it.”

I know my strengths are oversharing. … As a host, you want to pretend everything’s fine. You watch Jimmy Fallon, Jay Leno, David Letterman, their personal lives are not on display. Of course, I want to be looked at as a viable late night host someday so there was real apprehension on my part to reveal too much and to be too vulnerable and just say, “Oh, I’m depressed today” but the thing is, I am depressed some days. When I have let that out, I’ve left the show thinking, “Why did I even talk about that? That’s such depressing radio. Nobody wants to hear you complaining about your awesome life.”

Instead of people saying those things I think they’re thinking, people have said, “I relate to what you’re going through and thank you for talking about that.” I get that kind of feedback, so I really leaned into being honest about my feelings and trying to expect the same from my guests. I have a talent for getting people to talk about their feelings. It’s not a talent I try to hone to take advantage of people. It’s a power I have that not a lot of people have so I like to use it for good.

TC: I think the vulnerability is part of what connects people to you and the way the show flows. I liked You Up from the beginning because I’m a big fan of yours, but I can definitely tell a difference from then to now. I like it better now so kudos to you and everybody you have on. I feel like I could be in that room listening to you guys talk and it feels great.

NG: That is exactly how I like to feel when I listen to shows I like. I’m laughing with them.

Last week, a fan came to one of my live shows and her boyfriend said, “She always tells me things that you told her. She’ll say like, ‘Nikki told me this’ and I go, ‘You’re not friends with Nikki. What are you talking about? You don’t hang out with her.’ And (the girlfriend) goes, ‘But I feel like I do!’”

TC: I’ve seen people in crowds at stand-up shows and thought, just from reading their body language, “That person is not going to have a good time,” and then they wind up laughing and clapping and being the best audience member. Have you experienced this at your shows?

NG: Mmm-hmm, a lot. I don’t look in the audience before (a show) and go, “Oh, that woman’s gonna like me. That girl isn’t.” I don’t like to predict how anyone’s gonna handle me but after shows, I’ll do meet and greets with people in line and be like, how is this old woman who I have nothing in common with except we both have vaginas...This woman’s from a different part of the country. She probably voted a different way than I did but then she comes up and is like, “We are the same!” That is so incredible to me.

So many Americans are so repressed about our feelings and so ashamed of our depression. We don’t want to seem selfish by going to therapy. We’re so closed off and a lot of times humor is used to mask that. Let’s make jokes before anyone can really talk about what’s really going on. It can be such a defense mechanism, but I like to use it as, let’s talk about the real (expletive) but then make fun of it. Let’s not use comedy as a scapegoat. Let’s use it to get in there and mess around with what’s really plaguing all of us which is, it’s hard to be a human. … We’re all fighting battles within us and we don’t talk about it. I like talking about it because I think that’s the only way to get on the other side of it.

TC: Comedy has that connective power and live comedy in particular. That’s the beauty of what professionals like you are able to do. It’s amazing to watch that transformation happen in a room.

NG: I love making people laugh that, I don’t know that we’d be friends. I bet they hate a lot of my views. … It’s nice to be able to break through and make people see some things. I’m trying to bring light to things with my comedy where you walk away and you’re like, “I didn’t think about it from her perspective.” And I learn a lot because I acknowledge that I’m telling you like it is from my perspective, which doesn’t take into account a man’s perspective. I look to comedians to kind of fill those gaps for me. I think a lot of comedians can come off as know-it-alls, but I am not one. I admit, this is just what I think I know.

I learn so much from the feedback both on and off stage. Sometimes I’ll tell a joke like, “Girls, we all do this, right?” Then I’ll go, “Oh wait, you’re not laughing because you do it too. You’re laughing because it’s weird that I do it.” [interviewer, Glaser laugh] There’s something refreshing about that too.