'Give it a whirl:' Wilson's Whirligig Festival looks to its future

Since its inception, Wilson's Whirligig Festival has been a big attraction for the eastern North Carolina city, attracting around 20,000 people in its first year.

But it wasn't always smooth sailing when the city first took steps to establish an annual festival to bring all parts of Wilson together.

Theresa Mathis, who leads a group of community volunteers who put on the Whirligig Festival, recalled how each of the city's attempts to develop a festival was short lived.

In 2004, though, the founders of the present festival decided they needed a symbol that could bring unity to the city. After some brainstorming, they agreed it should be named after the famous whirligigs of local artist Vollis Simpson. 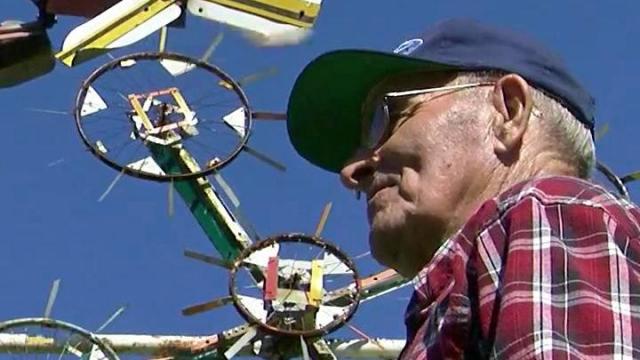 Vollis Simpson and His Whirligigs

When Vollis Simpson died in 2013, the New York Times eulogized him, saying in part, "By the end of his life Mr. Simpson had become an art star."

That same year, the North Carolina General Assembly recognized his world-wide fame and declared his whirligigs the official folk art of the state.

Simpson lived just outside of the city, but is claimed by Wilson as a local hero. His work, which is in museums across the world, including a prominent one on the grounds of the North Carolina Museum of Art in Raleigh, involves tall metal sculptures that spin and make noise in the wind.

Simpson made these towering structures by welding together metal he recycled from junk yards and other sources.

The acclaim Simpson's whirligigs garnered made them a logical fit for Wilson as city officials looked for ways to celebrate the community. Around 20,000 people came to the Whirligig Festival in its first year, Mathis said.

Mathis said 50,000 people now attend the festival every year, with roughly an even representation of locals and visitors.

"The trend with other festivals across the state is that they will require payment for entrance," Mathis said. "Our festival in Wilson started out free, and 13 years later, it's remained free."

The activities at the Whirligig Festival are meant to be child-friendly and family-focused, including arts and crafts for children, allowing them to make their own whirligig-inspired pinwheels.

Until Simpson's passing in 2013, a whirligig competition had taken place with the legendary artist as the judge. This was discontinued shortly after his death, but once the Whirligig Park is completed, Mathis said organizers intend to involve more whirligig-based arts and crafts.

There are two performance stages bookending the festival that have continual live music. Each act represents a different genre in an effort to appeal to as many tastes as possible. 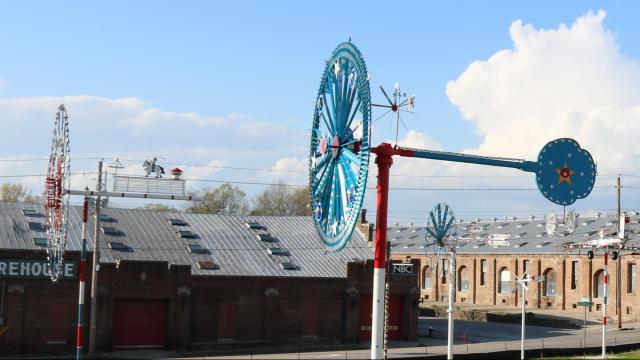 Jeff Bell, the executive director of the nearby Whirligig Park, said their park will be completed and open in time for the Nov. 4 and 5 Whirligig Festival.

The park is a separate project, led by another organization, but they are collaborating to make sure whirligig enthusiasts can experience both the festival and the park when coming to Wilson.

This year, the festival will remain in its current location on Nash Street, but in 2018, organizers plan on moving it closer to the Whirligig Park. This will allow visitors to experience the 30 unique whirligigs from Simpson while attending the festival.

Mathis and Bell both agreed collaboration between the two projects will continue.

"We just ask everyone to give it a whirl," Mathis said when asked what those unfamiliar with Wilson, Simpson or whirligigs should expect.