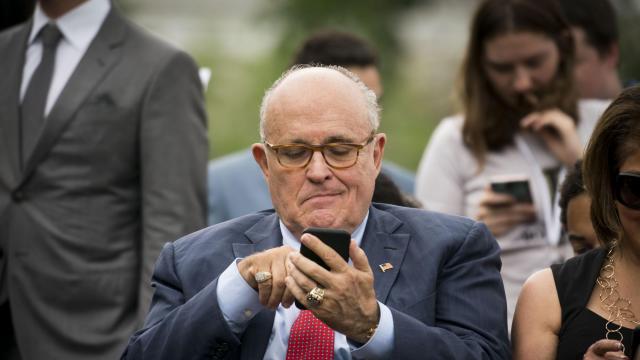 To Rudy Giuliani, the former New York mayor who is one of President Donald Trump’s lawyers, it was an example of how low Twitter would stoop to carry out its anti-Trump agenda.

It was, decidedly, no such thing. It was just a typo, followed by an opportunistic prank by an improv actor in Atlanta.

In a tweet Tuesday, Giuliani said the social network had “allowed someone to invade my text with a disgusting anti-President message.” He was referring to a Nov. 30 tweet in which Giuliani — by failing to put a space after a period, and starting the next sentence with the word “In” — had inadvertently created a hyperlink.

The tweet in question: “Mueller filed an indictment just as the President left for G-20.In July he indicted the Russians who will never come here just before he left for Helsinki.Either could have been done earlier or later. Out of control!Supervision please?”

G-20.In is a real domain name, but it hadn’t been used before Giuliani tweeted it. Twitter automatically converts such valid links into blue, clickable text.

When Jason Velazquez, 37, who owns a web design firm in Atlanta, saw the tweet, he immediately bought the domain for about $5. He then created a page with a simple message, which anyone who clicked on Giuliani’s accidental link would see: “Donald J. Trump is a traitor to our country.” The entire process took him about 15 minutes, Velazquez said Tuesday.

It was the type of throwaway gag that entertains Twitter users for a few hours before forever fading from memory. But Giuliani preserved it in amber by following up Tuesday with the baseless accusation against Twitter, which has often been the subject of bias complaints from Republicans. He characterized it as evidence that Twitter employees were “cardcarrying anti-Trumpers.”

Giuliani wrote: “Twitter allowed someone to invade my text with a disgusting anti-President message. The same thing-period no space-occurred later and it didn’t happen. Don’t tell me they are not committed cardcarrying anti-Trumpers. Time Magazine also may fit that description. FAIRNESS PLEASE”

A Twitter spokesman said “the accusation that we’re artificially injecting something into a tweet is completely false.” The company does not have the ability to edit users’ tweets, he said.

As to Giuliani’s argument that the second “period no space” instance in his original tweet didn’t create a similar link, that’s because Helsinki.Either, so far, is not a working domain.

Many Twitter users couldn’t resist noting that Giuliani, who spent 16 years as a security consultant, was originally brought into the Trump administration as a cybersecurity adviser. (He certainly has more digital know-how than Japan’s cybersecurity chief, who recently admitted that he doesn’t use computers.)

It’s not uncommon for political figures to display a lack of understanding regarding the machinery of the internet. Ted Stevens, a former senator from Alaska, was roundly mocked in 2006 when he described the internet as “a series of tubes.”

Nor is it the first time that politicians have run into issues related to domain names. Sen. Ted Cruz of Texas, for example, doesn’t own the www.TedCruz.com domain, which led to the site displaying a pro-Hillary Clinton message shortly after he dropped out of the presidential race in 2016.

Velazquez said he’d had little time to carry out his mischief last week. He saw Giuliani’s tweet at 6:20 p.m. and had to act in an improv show at 7 p.m.

He was at another improv show Tuesday when he saw Giuliani’s follow-up. He said he was bewildered.

“He could have deleted it and everyone would have forgotten about it; my tweet would have stopped going viral,” he said. “Instead he tweeted about it and created a conspiracy theory against Twitter.”