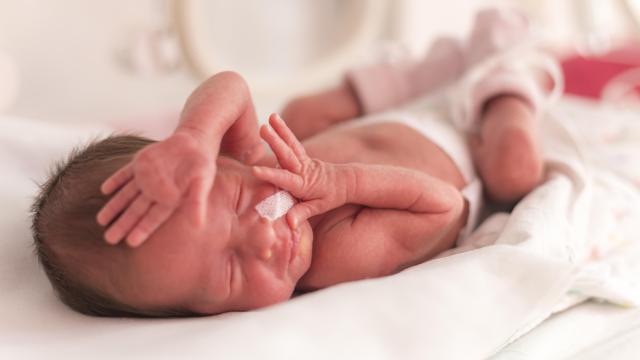 For parents with infants in neonatal intensive care units, the doctors and nursing staff often become like family as they work to save the lives of premature children.

"I've got more family members that I'm not related to than you will ever know," said Laurin Cooper, a father of premature twin boys who are now thriving at 8 years old. Thanks to the staff at Cape Fear Valley Health where they stayed in the NICU after being born four months early, the boys are happy and healthy.

Cooper also credits another important staple in the NICU, although this one only mimics some very particular human functions.

The Giraffe OmniCare Station, or "Giraffe bed," is a device that functions as a mother's womb for micro preemie cases like the Cooper twins. A micro preemie baby is a baby who is born weighing less than 1 pound, 12 ounces or before 26 weeks gestation.

Eight years ago, when Brendan and Cameron Cooper were born at just 23 weeks and three days, Cape Fear Valley Health had three Giraffe beds in total, two of which were luckily available.

"If there hadn't been two for us, we wouldn't be having this conversation," said Cooper. Because of those Giraffe beds, Cooper explained, "I have my two miracles."

Only about half of babies born before 24 weeks will survive, although that number is improving. Those first few weeks post-delivery for micro preemies are crucial as their lungs have not fully developed and they don't yet have any insulating brown fat.

Their skin is also so delicate, just moving them is risky.

"Giraffe beds are state-of-the-art – the most advanced level of care for premature infants. They're the closest thing to the mother's womb," explained Sabrina Brooks, executive director of Cape Fear Valley Health Foundation. "Giraffe beds eliminate the stress of moving a baby. All the necessary care during the incubator stage can be handled in the bed. Because they should have been in the womb another three to four months, they need a healing environment that can help development take place. With Giraffe beds, the temperature is controlled, the thermal condition and humidity are set."

According to Brooks, out of the 4,500 babies delivered on average each year at Cape Fear Valley, 10 percent will end up in the NICU for some period of time, ranging from one or two days to six months. The longer a premature infant can stay in a Giraffe bed, the greater their chance of survival.

After initially seeing the life-saving results of these incubators 10 years ago, the hospital and the community rallied to help the Foundation raise enough money to purchase the first two Giraffe beds, an investment of $40,000 each.

Now there are 24 in the unit. But with a NICU constantly at capacity, there is a need for more. The Foundation would like to be able to help provide the additional six beds needed.

"How do you look at a parent and say, 'If we had another one of these, we could save your child?' " Cooper questioned. "You need everything on your side when your babies come that early. The Giraffe beds made the difference. [My boys] were in the beds just under a month to get them through that initial period. After 28 weeks, the chances of survival go up."

Because of advanced care technology like Giraffe beds, families of micro preemies are more likely to see their children grow and develop long after they leave the NICU.

"You can't put a price on a piece of equipment that basically gave us our sons. They're my buddies, and they're tough as nails," Cooper said. "Now if only math would click."

Spoken with the satisfaction of a father who is grateful for the chance to help his children with their homework.

If you are interested in helping the Foundation provide the six additional Giraffe beds needed, please contact the Foundation at (910) 615-GIVE or foundation@capefearvalley.com.