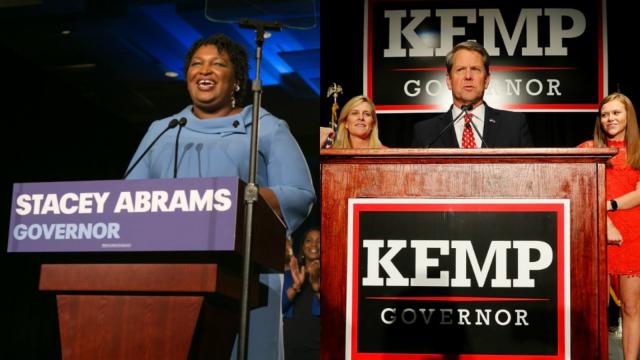 (CNN) — Georgia Republican Brian Kemp resigned as secretary of state on Thursday to begin his transition to the state's top office.

There's just one issue: Two days after the polls closed, the race is still undecided. CNN has not projected a winner.

Kemp currently leads Democrat Stacey Abrams, with 50.3% of the vote. But there are still ballots to count. If Kemp's share drops below 50%, the contest would automatically go to a run-off on December 4, even if he ends up as the top vote-getter.

For now, Kemp's lead stands at about 63,000 votes. The Secretary of State's office made public a spreadsheet with a county-by-county breakdown of the more than 21,000 outstanding provisional ballots. The Abrams campaign, which is staffing up for a legal fight, says there are additional ballots, many of them absentee, that have not yet been accounted for.

"Brian Kemp is 25,622 votes above the threshold for a runoff election. Twenty-five thousand votes of nearly 4 million cast are at issue in this race," Abrams campaign manager Lauren Groh-Wargo said on Thursday. "By (Kemp's) own admission, there are at least 25,000 outstanding votes, and hundreds if not thousands of more that we are learning about and discovering every day."

The campaign has also launched a new lawsuit in Dougherty County, where voters have alleged a delay in the distribution and processing of absentee ballots that began over the summer and was compounded by the effects of Hurricane Michael, which struck in October.

"We have reports of ballots never showing up, or being mis-delivered, and there was an incredible backlog," Kurt Kastorf, a member of the Abrams legal team, told reporters. "The county was continuing to send ballots at least as late as last week."

Kemp is moving quickly to foreclose the possibility of another vote -- at least in the minds of the public. He declared victory on Wednesday and on Thursday morning talked about his transition with the current governor, Republican Nathan Deal, by his side.

"On Tuesday, we earned a clean and convincing victory at the ballot box," Kemp said at a press conference announcing his resignation as the state's chief elections officer. "In light of where we are now, this will give public confidence to the certification process."

By stepping down as secretary of state, a move Democrats pushed for during the campaign, Kemp ensured he will not be seen formally signing off on his own election -- a potentially embarrassing step following a contest he oversaw amid accusations his office was trying to suppress the minority vote. The certification is currently planned for next Tuesday.

Kemp will also now be on the sidelines in the event of a recount. During a campaign debate, he said he would not recuse himself. But a group of voters asked a federal judge to bar him from supervising any potential recount. The case, which was brought by Project Democracy, which alleged a conflict of interest, was dismissed this morning after Kemp's decision rendered it moot.

"Our opponent has had his office declare himself the victor and we do not accept that," the Abrams campaign said in a call with reporters Wednesday evening. "They are trying to force an outcome ... without proof and expecting everyone to go along with it."

The Kemp campaign has argued that there are not enough outstanding ballots to force a run-off.

"Based on counts released by the Secretary of State's office, Brian Kemp's margin is so large that the number of provisional ballots and overseas ballots will not change his Election Day victory," Cody Hall, the Kemp campaign's press secretary, said in a statement. "Simply put, it is mathematically impossible for Stacey Abrams to win or force a run-off election."