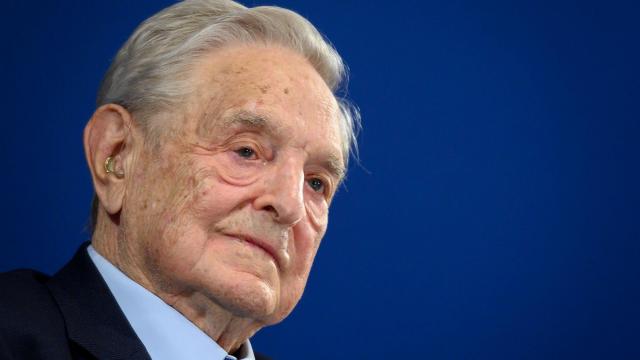 CNN — Two heavy hitters of the investment world recently disclosed that they own stakes in Palantir, the secretive and controversial big data firm backed by Peter Thiel that began trading on Wall Street in September. But one of them already plans to sell it.

Soros Fund Management, run by billionaire investor and philanthropist George Soros, and Third Point, the firm led by occasional activist investor Dan Loeb, both disclosed late Friday that they own shares of Palantir.

Soros Fund Management acquired 18.5 million shares of Palantir while Third Point took a more modest position of 2.4 million shares. But a spokesman for Soros told CNN Business Tuesday that the firm is planning to sell the stake.

The firm said in a statement to CNN Business that Soros Fund Management's current stake in Palantir amounts to about 1% of the voting shares of Palantir and was a result of an early-stage investment made in 2012 by a portfolio manager who no longer works at Soros.

News of the investment was a bit surprising given that Soros is known for backing liberal causes. Palantir was co-founded by Thiel, a venture capitalist who is known for being a member of the "PayPal mafia" that helped launch the payments giant.

Thiel, who is currently a member of Facebook's board of directors, is known to have more conservative political leanings and was also a backer of President Donald Trump in 2016. This makes him a bit of an outlier in the predominantly Democratic-leaning Silicon Valley.

But Soros Fund Management said in its statement Tuesday that it has since sold all of its shares in Palantir that "it is not legally or contractually obliged to hold and will continue to sell shares as permitted."

Soros Fund Management said it "does not approve of Palantir's business practices" and that it "made this investment at a time when the negative social consequences of big data were less understood."

As a result, Soros Fund Managment said it would "not make an investment in Palantir today."

Palantir went public through a direct listing of existing stock on the New York Stock Exchange. That means Palantir didn't need to sell new shares through a more traditional initial public offering. It's how Spotify and Slack also started trading on Wall Street.

Shares of Palantir have more than doubled from their so-called reference price of $7.25 a share on the day of the direct listing. Palantir is now worth nearly $30 billion.

The company, which has many governmental customers around the world, has been involved in helping track data about the spread of coronavirus as well as the potential distribution of vaccines.

But Palantir has also been controversial due to its relationships with government agencies and the vast trove of data it tracks. That has raised consumer privacy concerns.

The company's Gotham, Foundry and Apollo platforms have been used to help monitor terrorist activity. Big businesses also use Palantir's services to analyze data about weather patterns and consumer purchases.

Up until recently, little was known about Palantir's finances. But before going public the company disclosed that while revenue is surging, it is not yet profitable.

Palantir said that sales surged 52% to $289.2 million and raised its revenue outlook for the full year. The company also announced it won new contracts with the US Army and National Institutes of Health.

But Palantir noted that a big portion of its losses was due to $847 million in compensation expenses tied to the direct listing. Excluding that and other expenses tied to the Wall Street debut, Palantir reported a net profit of $73.1 million. Shares soared more than 8% on the news Friday.