Raleigh, N.C. — Protests continued again on Thursday in downtown Raleigh in the wake of the death of George Floyd. Another protest was also slated for Thursday evening in Durham.

10:19 p.m.: Protests on Thursday were mainly peaceful in Durham, Raleigh and Cary. There were still protesters out in Raleigh after the 10 p.m. curfew, according to WRAL's Joe Fisher. They left peacefully before 11 p.m.

6:26 p.m.: The Raleigh City Council is holding a virtual meeting at 7 p.m. You can view the video on WRAL.com and on the city's YouTube page.

The special meeting is to receive public comment regarding the city’s response to events of the last week. People wishing to speak will be given two minutes to ensure as many voices can be heard as possible.

6:12 p.m.: Protests and marches were currently going on in downtown Raleigh and Durham.

5:34 p.m.: A small crowd of protesters have gathered at the fountain of Downtown Cary Park. A number of children were also taking part in the Peaceful Fights for Equal Rights story reading and discussion. A walk and march began shortly after 5:30. 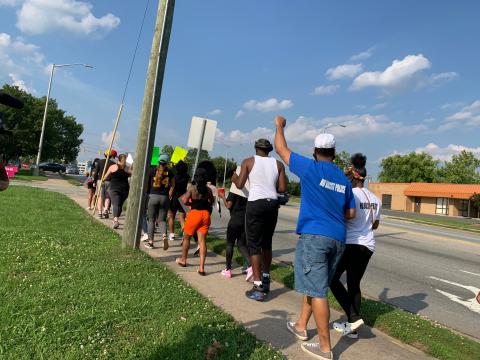 5:21 p.m.: Durham police are asking for the public's help with an incident that happened Wednesday night during a protest and march over the death of George Floyd.

Protesters were lying down in the street, known as a die-in, in front of the Durham Police building on East Main St. The roads around there were blocked off for the protesters to march. A vehicle then came onto Main Street and approached the protesters, causing many to get up and flee for cover.

Officers were stationed at several intersections and police said the vehicle did not pass through any of the intersections that were blocked off. The vehicle stopped near the protesters as they got up and began to run. It then turned around and left the scene, traveling southwest on Hood Street.

Police said they were unable to leave their posts to stop the vehicle because they were blocking the intersection. This investigation is ongoing and anyone with information about this incident is asked to call CrimeStoppers at 919-683-1200.