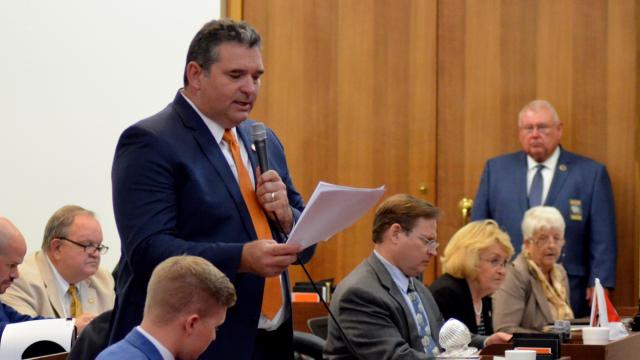 Raleigh, N.C. — Both the House and the Senate voted in favor of a budget technical corrections bill Thursday that includes a principal pay fix that will prevent some principals from losing pay this year.

The House voted 70-46 and the Senate 29-17, sending it on to Gov. Roy Cooper. Rep. David Lewis, R-Harnett, said the fix is a good start to clearing up issues with principal pay.

“This is not an absolute fix, but it is certainly a fix to deal with the issue in the short term," he said.

Some had hoped the General Assembly would extend the hold-harmless provision beyond this year.

"With us not coming back to deal with these issues until the short session, we’re likely going to deal with a situation where we’re going to lose some principals," said Rep. Graig Meyer, D-Orange.

He said that principals uncertain of what their pay will be next year may consider retirement, switching jobs or leaving the state.

“We know we’re going to work on extending that out further as we go down," he said.

But he also said that many critics of the new principal pay plan are forgetting what the General Assembly already did for principals in the long session.

The new principal pay plan passed in the 2017-18 budget infused the program with cash and attempted to fix many of the issues principals around the state had with the prior principal pay schedule. EducationNC reported extensively on those issues, including the fact that North Carolina is 50th out of all the states and Washington, D.C., for principal pay.

Rep. Amos Quick, D-Guilford, had greater criticisms for the House than just the principal pay schedule. He formerly served as vice chairman of the Guilford County Board of Education and said that, in talking with principals in Guilford County, he learned that they don't feel respected by the state lawmakers.

“It is embarrassing how we treat the principals in our schools and then the expectations that we have for them being so high," he said.

Others, like Rep. Billy Richardson, D-Cumberland, asked why the House was taking up a principal pay fix when the state's schools are failing. He argued the House should be having a special session to address that.

Dollar responded to criticisms by reciting the ways in which the General Assembly has addressed education in recent years, including increasing teacher pay, investing more money in education and investing in early childhood. He also noted that the state's high school graduation rate continues to rise, reaching an all-time high this year.

“We have been working on education, and if there is any doubt in any member’s mind about that, I’d be happy to sit down with you," he said.

Quick, who is in his first term as a representative, noted that he was not around for much of what lawmakers have done.

“I wasn’t here during what you call educational reform," he said. "I was in the field watching the impact of policies on our schools.”

Meyer also brought up attempts by the House to tackle the class size issue in early grades. Legislatively mandated class-size limits for kindergarten through the third-grade go into effect next year, and some districts have said they will face space limitations and will have to end extracurriculars like music, art and physical education as a result.

In the technical corrections bill introduced by the House Wednesday, K-3 class size was on the agenda, but when the two chambers merged bills and came out with a unified report, it was no longer under consideration.

“It’s really a missed opportunity that we weren’t able to deal with this in this bill," Meyer said.

Thanks to @DebButlerHD18 for capturing my comments on #classsizechaos. We could have fixed this issue today. pic.twitter.com/V1vRhMaC9V

The State Board of Education also met Thursday, and members weighed in on the issues with the principal pay schedule.

Chairman Bill Cobey sent a letter to lawmakers, thanking them for infusing more than $40 million into principal pay but asking them to fix the "challenges" the legislation has created for some of the state's longtime principals.

"Some of our highly talented principals stand to lose an average of over $8,000 in pay," Cobey wrote. "We respectfully request that you extend the 'hold harmless' provision for all principals through fiscal year 2018-2019."

The state board voted to send the letter Thursday after getting a report from its legislative director, Cecilia Holden, that about 350 principals are currently being held harmless this fiscal year.

Holden said she doesn't think lawmakers intended the problems and said she is hopeful they will correct them.

"I do believe, based on what I heard as late as (Wednesday) night, that when they do extend the hold harmless — and I say when, not if, because I remain hopeful — is that, when they do that, that it would be done right," Holden said. "I have offered a number of different options for consideration. Board members have done the same thing. I don’t know if they were able to process all of that in the time it took between the House and the Senate to finalize what would go in that conference report (Wednesday) night."

Board member Eric Davis pushed for the board to send the letter Thursday, saying it would send a powerful, unifying message if it came from Cobey and Superintendent of Public Instruction Mark Johnson. Despite the board's unanimous vote to have the chair and the superintendent sign the letter, Johnson declined, saying he wanted to talk with lawmakers himself.

"I am supportive of the extension of the hold harmless provision to give school systems and principals more time to adjust to this new pay scale that best compensates principals who drive results in our schools," Johnson said in a statement. "I did not sign the letter because I do not think it is productive to try to negotiate through the media. My office has provided legislators with necessary information and will provide them with answers to questions based on the September payroll numbers, which we should have next week. We look forward to discussing this matter with the General Assembly as we work together to improve teacher and principal pay."

In an interview after Thursday's board meeting, Cobey said he believes Johnson had "an obligation" to sign the letter. "(But) there’s no sanctions if he decides not to sign that letter, and I’m OK with signing it myself," Cobey said.

Correction: A previous version of this story incorrectly stated that 350 principals could lose pay during the 2018-19 school year after the hold-harmless expires. However, the 350 figure refers to the number of principals who are currently being held harmless this fiscal year. There is no way to know how many principals would be affected by an extension of the hold-harmless for FY18-19, since academic growth for schools won't be known until September 2018, according to Department of Public Instruction spokesman Drew Elliot.