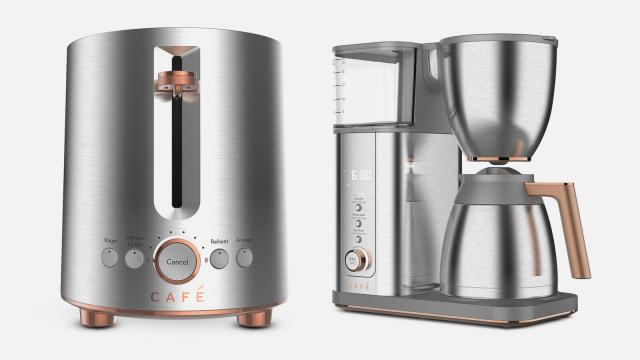 CNN — The General Electric brand's famous cursive logo is a common sight on major household appliances, including washing machines and refrigerators. But it hasn't been emblazoned on its own smaller appliances for 35 years. That's about to change.

GE Appliances, announced Thursday it would be adding 19 new GE products to store shelves, including blenders, toasters and coffee makers.

GE stopped manufacturing and selling small appliances in 1984. (In 2016, GE sold its appliance business to Haier, a Chinese home appliance manufacturer for $5.4 billion.) Haier licenses the GE brand for its appliances.

The company says the new collection was designed by teams of engineers based out of GEA headquarters in Louisville, Kentucky. The new line of appliances is built on findings from GEA's microfactory innovation hub, FirstBuild, known for products such as the Opal Nugget Ice Maker and Prisma Cold Brew coffeemaker.

GEA said now is the perfect time to bring the GE brand back to small kitchen appliances as people are stuck at home and making food for themselves.

"The habits of consumers have changed dramatically over the last several months of the pandemic. As people are making most of their meals at home, they have experienced everything from recipe experimentation to cooking fatigue," said Andre Zdanow, executive director of small appliances for GE Appliances.

GE, no longer associated with its appliance business, is struggling in its post-consumer-products reality. The industrial conglomerate has faced financial woes in recent years including loads of debt and unsustainable businesses. It reported in April that nearly $1 billion of its earnings were lost by the coronavirus pandemic.

The company also announced in May it would be selling off its lighting division, GE Lighting, to smart home company, Savant Systems.