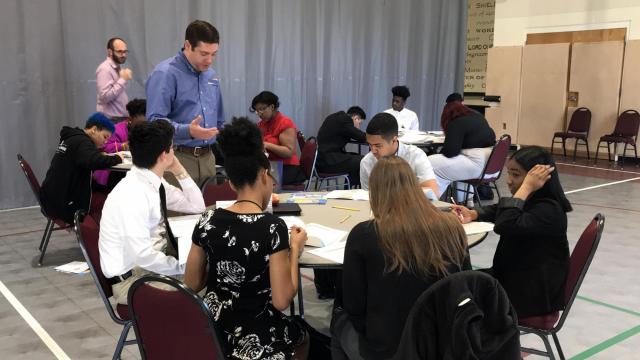 There's no one-size-fits-all solution to building a robust and diverse workforce — a fact that Garner's educators and business leaders fully understand.

That's why Garner Magnet High School, in conjunction with Garner Economic Development and the Garner Chamber of Commerce, launched the Trojan Career Prep Program in 2016. The career-readiness initiative is tailored to high school seniors who are interested in building their job skills and is open to all students — those who plan to go to college and those who plan to head straight into the workforce.

According to the National Center for Education Statistics, 70 percent of high school seniors go straight to college after graduation. But while post-secondary education is a pathway that suits many, it isn't an option that every high school student considers or pursues. Some go straight into the workforce, and the Trojan Career Prep Program can be especially beneficial for these young people.

The program helps students develop job readiness skills through resume writing workshops and an off-campus event where they learn how to create an elevator pitch, ace an interview, and dress for success. In the 2018-19 school year, the program added a headshot component, with each student leaving the program with a professional headshot they could use for a LinkedIn profile.

The program also hosts a jobs fair for students who are interested in looking for full-time work.

"We brought in companies like Johnson Controls, Newcomb and Company, and ST Wooten Construction. We brought in 43 companies in total. This year we opened up the job fair to all of the students in Wake County," said Lisa Daughenbaugh, the school's career development coordinator.

Garner Magnet High and Trojan Career Prep program graduate Connor McDougal attended the jobs fair in 2018 and said he met numerous great potential employers. However, Daughenbaugh put him in touch with the president of Pitt Electric, thinking that McDougal would be a good fit for an apprenticeship there.

"Ms. Daughenbaugh was just so nice, and she just cared about me so much and saw something in me. She got in touch with the electrical company's president, and he came to the school while I was in class, and she pulled me out of class and I talked to the president of the company," McDougal recalled.

McDougal has been working as an apprentice for Pitt Electric for more than a year and is learning useful skills such as running conduit and installing pipes. He said the varied tasks ensure the work is "never boring."

"Instead of trying to get through the day, you're focused on getting your work done, and that's what I like about [the job] because the time just flies right by," he said.

McDougal briefly considered college out-of-state, but was turned off by how expensive it was. He said that he thinks Daughenbaugh realized how hardworking he was and said the Trojan Career Prep Program helped him refine his resume and practice his interviewing skills.

"I've been doing jobs that involve using your hands since I was 16," McDougal said. "I like the career of being an electrician. I've seen how much money you can actually make from it. I've also considered going to Wake Tech [Community College] after I do two years of this apprenticeship to take some electrical classes and build up my resumé even more."

Garner Magnet High's career-readiness program is helping grow the Triangle workforce while emphasizing learning through skills education for all students, especially those who want to get a job right after graduation. Daughenbaugh said the importance and need for a career-readiness program was reiterated when a student with a 4.5 GPA came to her and said that he planned to go straight into the workforce instead of going to college.

"I was shocked. I told him that I needed to understand why he was not applying to N.C. State or UNC-Chapel Hill," she said. "But through talking to him, I learned that he couldn't afford to go to college and didn't have parents who could financially support him. His parents had actually prepared him for the workforce and had talked to him about it."

There are many reasons why a student may opt to head straight into the workforce, whether they be financial, practical, or career driven. Garner Magnet High's Trojan Career Prep Program is helping this demographic prepare for the next phase of life, while also giving employers in the Triangle a pool of prepared young people who are ready to get to work.

This article was written for our sponsor, the Town of Garner