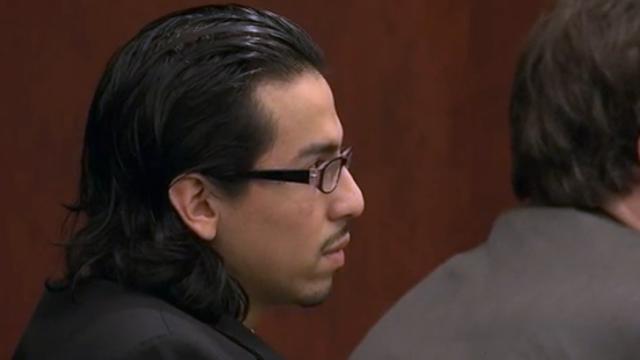 Raleigh, N.C. — A gang member charged in the death of a Raleigh man nearly two years ago told jurors in his first-degree murder trial Thursday morning that he didn't mean to kill the victim and that the crime weighed on his conscience until his arrest months later in Louisiana.

Jorge Luis Juarez, 22, is accused of killing Alfonso Canjay Rincon, 42, outside Rincon's home on Foxhall Village Drive while, police say, Juarez and three other people were breaking into cars for stereos early on the morning of Oct. 31, 2012.

Authorities say Rincon went outside to investigate a noise around 1 a.m. and ended up following the four in his car while his wife called 911.

Juarez – who claimed he had no involvement in the break-ins – testified that Rincon started ramming the car he was riding in and that he, scared, rolled down his window and shot Rincon point-blank. It wasn't until the next day, he said, that he read online that Rincon had died.

U.S. marshals arrested Juarez five months later in Jefferson Parish, La. By then, Juarez said, he was ready to take responsibility for his actions.

"I wanted to face it, stop playing games, get it over with," he said. "I've had thoughts about getting to (Rincon's family) somehow and maybe asking for forgiveness."

Defense attorney Ryan Willis told jurors in closing arguments Thursday afternoon that an angry Rincon decided he was going to take matters into his own hands after having been the victim of other break-ins.

"It was reasonable for him to believe that his life was in danger," Willis said.

Wake County Assistant District Attorney Jeff Cruden, however, said there was no justification for Rincon's death and that even his three co-defendants in the car testified that they didn't know why Juarez shot him.

A grandfather and father of four who worked two jobs to support his family, Rincon died for the price of a $20 car stereo, Cruden added.

"There's nothing about what happened that night that is excusable, permittable, allowable or legal," he said.