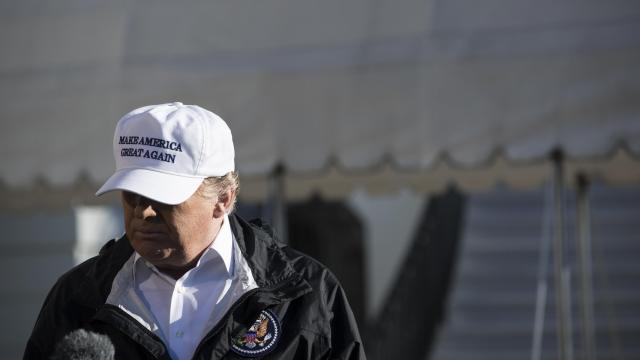 EDITOR'S NOTE: Gail Collins is an Op-Ed columnist for The New York Times, a former member of the editorial board and was the first woman to serve as Times editorial page editor, from 2001 to 2007.

We need to look at the bright side of Donald Trump’s border wall fixation.

Sure, he’s shut down the government and thrown the nation into chaos. But it could be worse. He could be demanding a fiery moat between us and Canada. Or building a 36,000-foot-deep barrier across the Pacific Ocean to drive home his commitment to tariffs.

Trump wants a $5.7 billion down payment to build a wall along the Mexican border to protect us from caravans of terrorists and drug dealers. We hadn’t heard a lot about the caravan menace since the midterm elections, but the president brought it back on Wednesday. This was shortly before he walked out of a meeting with Democratic leaders about the government shutdown.

The two sides disagreed on who caused the talks to collapse. Obviously, it was something about the you-know-what. Senate Minority Leader Chuck Schumer claimed that when the wall came up, Trump “sort of slammed the table … and said we have nothing to discuss.” Republican leaders tried to pin all the blame on obdurate Democrats.

“I said bye-bye,” tweeted the president.

O.K., this one is pretty clear. The meeting was brief. After only about 30 minutes, he who says “bye-bye” is the culprit. Even if, as House Republican leader Kevin McCarthy claimed, Trump “brought a little candy for everybody.”

Maybe all this wall obsessing makes Trump tired. He certainly seemed low-energy during his Oval Office address. “He makes Jeb Bush look like a combination of Mighty Mouse and Bruce Springsteen,” a friend of mine said after the president finished his nine-minute speech to the American people.

For every viewer whose response to the talk was “Wow, we should do something about immigration!” there must have been a hundred whose first reaction was “Why does this man keep sniffing?” Deviated septum? Nasal polyps? Trump’s breathing has actually sounded strange for a long time, but most of us have chosen to ignore it rather than engage in a national conversation about the president’s nose.

If you watched the address — and really, you could have, it was only about as long as it takes to microwave popcorn — you saw a 72-year-old guy squinting at the teleprompter and making rather alarming breathing sounds while reading a speech about how we need a wall to protect women who are “sexually assaulted on the dangerous trek up through Mexico.”

This is not a man who should wrap his arguments around the idea of protecting women from sexual assault. But also, gee, he sounded like Uncle Fred who you haven’t seen for a while and suddenly he shows up for Thanksgiving with weird colored hair and vacant eyes and he’s talking into his mashed potatoes.

Now we know why Trump never made a speech from the Oval Office before. He’s a guy whose great political talent is yelling applause lines to a howling mob of supporters. If they cheer, he goes back again and again.

When he first announced he was running for president, he got an enthusiastic response to a speech that called Mexicans drug-dealing rapists. We will always wonder what would have happened if he’d said “Pre-K, all the way!” and gotten a similar reaction. Maybe this week he’d be on TV refusing to fund the government until he got more money for early childhood education.

Trump’s political advisers encouraged him to carry on about a wall during the presidential campaign because they wanted him to focus on immigration and understood how difficult it is for him to stay with … a thought. As Julie Hirschfeld Davis and Peter Baker of The Times reported recently, the advisers knew he liked to brag about building stuff, so they decided to “get him to talk about he’s going to build a wall.”

Again, think of the bright side. What if they’d wanted his signature issue to be American pre-eminence throughout the globe and got him to peddle a plan to build a huge tower that would reach all the way to heaven? Hasn’t been attempted since Genesis, but if you stacked a million hotels on top of one another — Make America Great! By now Trump would have closed off a quarter of Illinois to make room for the foundation.

There’s no way to be cheery about the government shutdown. This is really terrible. Some of those suffering most are smaller government contractors, whose businesses could very well fail while they wait to be paid for work they’ve already done. (Stiffing contractors is possibly the only area of his job in which our president has a lot of pregovernment experience.)

But about the wall. People, how do you feel about putting a concrete or whoops-maybe-steel-slats barrier between us and Mexico?

A) Great way to avoid the constant danger of caravans.

B) Meanspirited waste of money.

C) Better than the fiery moat.

The beat goes on. Thursday had Trump scheduled for a visit to the Texas-Mexico border — a trip that the president told a lunch with TV newscasters is “not going to change a damn thing.”

He sure sounds negative. Do you think he believes he’s already been to the border enough? After all, he already went there in 2018. Next thing you know, they’ll be expecting him to go there every year.