Gabrielle Union Fights Back Onscreen, and in Life

Some actors, when confronting a physically grueling role, might spend six months getting ripped at the gym or finessing their mixed martial arts moves.

Gabrielle Union? She did Pilates and drank rosé.

“I didn’t want to do any sort of special training because the character really wasn’t planning on this,” she said of playing Shaun Russell, a mother desperately battling ruthless invaders who have locked her two children inside her deceased father’s maximum-security home in “Breaking In.” “She didn’t have a history as a Navy SEAL or Special Op or jujitsu champion. So when you see Shaun throw a punch, I want it to look primal — like a feral cat just scratching, clawing, using anything at her disposal to save her children.”

“Breaking In,” which opened Friday, is her third collaboration with producer Will Packer (“Girls Trip” and the “Ride Along” movies), who is her partner on BET’s soon-to-wrap two-hour finale of “Being Mary Jane” and the 2016 family comedy “Almost Christmas.”

It also earned her the breakthrough producer of the year award last month at CinemaCon, the theater-owners’ convention. “We took a movie with a very, very low budget, only a couple main household names, and we got a summer release date,” said Union, who recently signed a first-look deal with Sony Pictures Television.

In a phone call from Los Angeles, Union, 45 and married to Dwyane Wade of the Miami Heat, talked about getting her second wind in Hollywood, surviving rape and critics of Bill Cosby’s accusers. 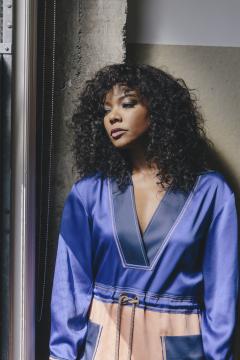 Q: Shaun gets pretty knocked around in this film. Was that all you?

A: Oh, I had an amazing stuntwoman who had just come off “Black Panther,” so she did most of the crazy, crazy heavy lifting and the falling off the hill and falling onto the truck stuff.

Q: You’ve weathered being an aging Hollywood “It girl” and lived to talk about it.

A: You go from ingénue to “who is you?” So by your 30s, your 40s, they literally put you out to pasture. They decide that older women hold no value. We’re not sexy, we’re not worthwhile, our disposable income is not to be accorded. And so we didn’t have a ton of examples of women of color getting starring roles and endorsement deals and having opportunities. I just didn’t know what to expect, except less. What I was not anticipating was the second that I found my self-worth and started putting it out in the universe — whatever comes my way has to allow me to have joy, peace and grace — every opportunity has been dreams.

Q: After four seasons, “Being Mary Jane,” about the trials and tribulations of a TV news anchor, will end with a two-hour movie in October. Will you miss her?

A: Yeah, being able to play a deliciously complex, imperfect black professional woman whose life is a bit of a mess, who doesn’t always make the right decisions, who’s real. But by the time Mary Jane became a bed-wetter, I’m like, “I think we covered everything, guys.” Then I had hundreds of women saying: “Why is it being canceled? I look forward to her. She’s me; she’s my friend.” And I realized how people saw themselves accurately reflected — and not just the good parts, but an honest portrayal of a woman who’s 40 years old, hasn’t gotten married, doesn’t have a child, and is waffling between careers and what makes her happy.

Q: In your 2017 memoir, “We’re Going to Need More Wine,” you wrote about having been raped at gunpoint in a Payless store when you were 19. And you recently took some Cosby defenders to task on Twitter.

A: That’s one of my biggest gripes with how the Cosby survivors are being handled, as if this is all some elaborate ruse for a cash grabber or to gain rape fame. Which is why I tweeted the other day that when people listen to me tell my story, they always use words like “brave” and “courageous” and “strong.” My rapist took a plea deal, he got 33 years, he went through the criminal justice system. But I also needed to hold Payless shoe stores accountable by hitting them in their pocketbook. So I wanted to remind people that when you’re making these accusations and characterizing these women that you don’t know, give them the same courtesy, grace, empathy and sympathy that you give more famous rape survivors.

Q: You’ve had a vision board for six years. What’s left to accomplish?

A: Machu Picchu. I’m trying to get there, honey. And a baby, so I’m going to just keep putting that on my vision board until a little angel blesses us. Luckily, I have an A-plus life without a human being that shares my DNA, so if one happens to show up magically, miraculously, and I can add an extra oomph, great. But you’re still going see me kicking butt no matter what.