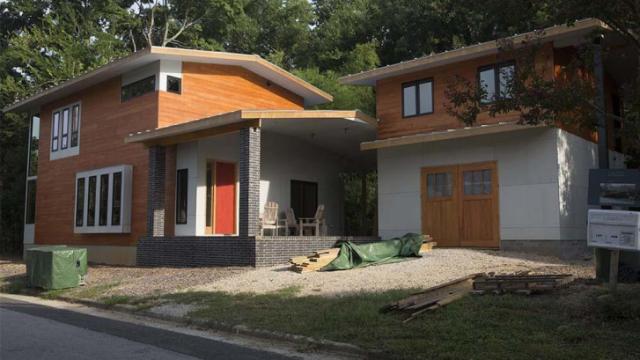 Raleigh, N.C. — After almost six hours of legal arguments from four attorneys on Monday and Tuesday, the future of a home under construction in Raleigh's historic Oakwood neighborhood is now in the hands of Superior Court Judge Elaine Bushfan.

Marsha Gordon and Louis Cherry were granted necessary permits to build the contemporary house at 516 Euclid St., including a certificate of appropriateness from the Raleigh Historic Development Commission.

Neighbors argued that the house doesn't fit with the character of Oakwood, and they filed a complaint over it. That led the city's Board of Adjustment to reverse the certificate, which suspended construction on the home.

City officials, along with Gordon and Cherry, in March appealed the Board of Adjustment decision to Superior Court.

"A compatible new style is entirely appropriate. The guideline doesn't forbid it; it doesn't even discuss it," said Nick Fountain, an attorney for Gordon and Cherry.

Fountain also dismissed the neighbor's contention that the modernist home would hurt the value of their own homes, noting that property values in the area have risen since construction got underway and the dispute began.

It could be weeks before Bushfan rules in the case, and an appeal is likely, regardless of which side wins.