Raleigh, N.C. — The state Department of Transportation planned billions of dollars more in road construction for the next decade than it can afford, according to recently reworked cost estimates.

The overrun forced a detour in the state's long-run planning process and sparked concerns that new projects won't be added in the coming years and that currently planned projects may be dropped.

There's always give and take in this process, which lays out plans for more than 1,000 projects in a document called the State Transportation Improvement Program. That plan gets reworked every two years or so regardless of funding issues.

But the size of this expected overrun is noteworthy, amounting to at least $7 billion from 2024 to 2033, according to the latest DOT estimates. 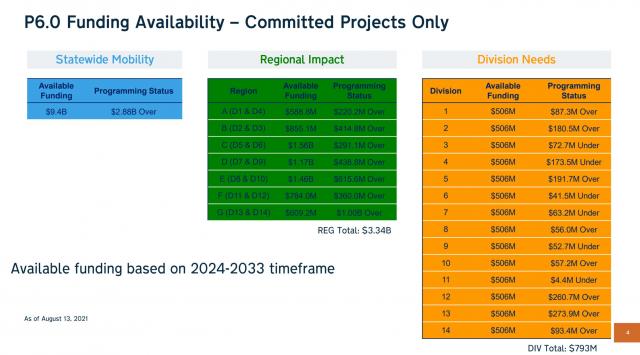 And that's just accounting for "committed" projects over that timetable, a designation that generally means they're expected to start in the first six years of the plan. Add in non-committed projects in the plan's later years, and the new estimates run $13.3 billion above what was already supposed to be a $24 billion plan.

“It is a problem," Joey Hopkins, the department's deputy chief engineer for planning, acknowledged last week.

The department, and state leaders sympathetic to its cause, have said for years that transportation has a revenue problem. Gasoline taxes pay for most projects, and the federal government hasn't raised the rate since 1993. State lawmakers changed North Carolina's gasoline tax in 2015, allowing it to increase with inflation and the state's population.

But as more people shift to electric vehicles – and even more fuel-efficient vehicles – those revenues will wane, and the trend is only expected to increase.

“This is another symptom of the problem of our revenue streams being out of date," said Sen. Mike Woodard, D-Durham, who follows transportation issues. "It makes it clear that we need to modernize the DOT’s revenue, and that’s going to be a heavy lift, but it’s past time to roll up our sleeves.”

Audit: DOT not following spending guidelines, lucky to be within budget

An appointed commission, co-chaired by former Raleigh Mayor Nancy McFarlane and Howard Nye, head of a large supplier of concrete and other road building materials, issued a report in January saying the state needs to increase its transportation spending by at least $20 billion over the next 10 years.

Some of its recommendations:

The project cost increases revealed over the last few months stem from a routine re-estimation that came during a global pandemic that upset supply chains, raising material costs, and roiled labor markets, raising those costs as well. Real estate prices in North Carolina are going up, too, boosting the costs DOT expects to pay in the coming years to buy property to build or widen roads.

Hopkins stressed that the department is solvent, with "almost $2 billion in the bank.” He said projects on DOT's 12- and 36-month let lists shouldn't be affected. Further out, hard decisions await, and the department is talking to local leaders around the state about scaling projects back to save money without eliminating projects.

A DOT working group will also put together a methodology to decide what planned items may get dropped.

“We want to have a transparent and fair process," Hopkins said.

The StarNews in Wilmington reported on the shortfall earlier this month and quoted local leaders concerned they won't be able to add a major project, the Cape Fear Memorial Bridge replacement, to the plan for another decade.

DOT officials stressed these are early days. The next transportation plan isn't due, even in draft form, until December 2022.

It probably won't be approved by the State Board of Transportation until the summer of 2023, Hopkins said. It's possible some construction, material and labor costs will come down between now and then. Costs also vary depending on the route road projects take, which hasn't been decided for some of these projects, and their size.

"I just want to reiterate: We’ve got time to work this out," Hopkins said. "We need to have a document that people can believe in when they look at it."

"I don’t know that we’re at a point where there’s a lot of discussion about losing projects," Lukasina said. "We certainly don’t want to lose any projects.”

‘We’re really looking at our projects," he said, "to make sure that we have good numbers and that those stay in there and continue to move towards completion.”