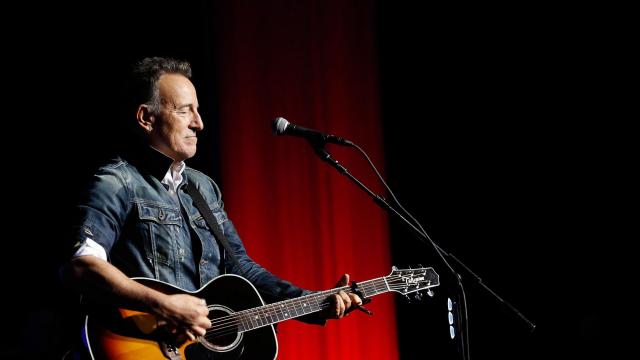 CNN — Following news of Bruce Springsteen's November arrest for suspicion of driving while intoxicated, a source close to the musician is sharing more information about the incident.

"When this is all resolved, I think, people are gonna have some serious doubts about the seriousness of this, especially when the actual details of this are revealed, including the blood alcohol level," the source told CNN.

Springsteen was arrested at Gateway National Recreation Area in Sandy Hook, New Jersey, on November 14 and charged with DWI, reckless driving and consuming alcohol in a closed area, according to a spokesperson for the National Park Service.

That night, the source close to the singer said, Springsteen took a shot of alcohol with fans in the park after taking a photo with them. The source added that Springsteen is known to take photographs with fans. "That's typical Bruce," the source said.

"I don't know why they stopped him," the source said of the authorities. "I mean technically you're not allowed to drink in a state park, and I don't know, maybe, if a policeman sees somebody drinking and doesn't give them a ticket, they lose their job," the individual added. "Any kind of alcohol-related driving thing is serious," the source added.

One officer said they observed Springsteen "consume a shot of Patron tequila and then get on his motorcycle and start the engine," according to a probable cause statement obtained by CNN.

Springsteen told the officer he had consumed two shots of tequila in the previous 20 minutes, according to the probable cause statement.

"SPRINGSTEEN smelt strongly of alcohol coming off his person and had glassy eyes," the officer said in the statement, adding he "was visibly swaying back and forth while I observed his eyes."

Springsteen, according to the officer, took 45 steps during the "walk and turn" test "instead of the instructed 18."

Prior to the screening the officer said he approached Springsteen and informed him alcohol was prohibited in the park, and asked whether Springsteen was leaving, to which "he confirmed he was going to drive out of the park," the statement said.

CNN has reached out to representatives for Springsteen and the National Park Service for further comment.

A spokesperson for Jeep told CNN on Wednesday the company would pause running its ad including Springsteen, which first debuted during the Super Bowl, in light of the charges.

"It would be inappropriate for us to comment on the details of a matter we have only read about and we cannot substantiate," a statement from the company read. "But it's also right that we pause our Big Game commercial until the actual facts can be established."

"I just hope Jeep ends up looking bad in the end," the source close to the music icon said.

CNN has reached out to Jeep for additional comment.

Springsteen is expected to have his first hearing on DWI charges "towards the end of February," a spokesman for the US Attorney's Office for the District of New Jersey told CNN.