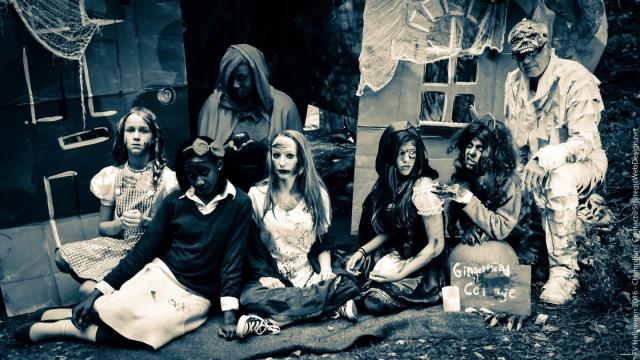 This article was written for our sponsor, Fuquay-Varina.

Every year, October is greeted with orange and black decor, stoops adorned with pumpkins and candy aisles overflowing with your favorite treats. The month culminates with fun traditions, kids clad in costumes and — if you're lucky — a trip to Fuquay-Varina.

The funky town of Fuquay-Varina, which lies just outside of the Triangle, pulls out all the stops during Halloween with its many festivities that get locals and visitors alike into the spooky spirit.

"It's one of the more entertaining and fun holidays that we have. It’s also a great community-building holiday with great opportunities for us to meet our neighbors," said Anthony DiMarzio, assistant director of parks and recreation for the town. "We try to host a lot of activities to get people in the Halloween spirit."

DiMarzio said Halloween is a great holiday for meeting new people and making great memories since holidays like Thanksgiving and Christmas are usually spent privately with family.

"I always look at Halloween as a community event because there's not really too many other times that you can go up to your neighbor's house, knock on their door and get candy," DiMarzio said. "Even on Labor Day and the Fourth of July, you're having cookouts with your family and friends, but this is the one [time] where you go to strangers and you meet new people."

One of Fuquay-Varina's main Halloween attractions is the Haunted Trail, which was inspired by similar festivities DiMarzio attended in his hometown in Massachusetts.

"I grew up in Massachusetts with Salem right down the street, so Halloween was kind of a big deal to us with the witches and all that other stuff. So one of the things that I wanted to bring here when I became the programmer was a really good community event [like] the haunted trail," DiMarzio explained.

"It's a really scary walk in the woods. It's one of those places that if you go to at night, you will be freaked out just because of all the noises," DiMarzio said.

The Halloween Trail is truly a community event, enlisting help from volunteers — including the middle and high school students — who are each assigned a specific area of the trail to haunt.

DiMarzio said the volunteers make the trail come to life. There is no "cohesive" theme, but instead, people are given free reign to come up with spooky scenarios in their assigned zones.

Past trailblazers have experienced run-ins with werewolves, creepy baby dolls come to life and a tent of scary, circus performers.

"The thing that makes it interesting is that we don't really run electricity throughout the trail," DiMarzio said. "It's super dark, we're relying on minimum light — just a lot of jumps, scares and other eerie things that you see on the way. And we also pump music throughout the entire trail, too. We have these spooky sounds so wherever you are, you're trying to get all your senses hit at some point."

One of the most memorable costumes in recent years that DiMarzio can recall is when a trail volunteer dressed up as Pennywise, the clown character from Stephen King's novel and films "IT."

"It wasn't a cheap Pennywise outfit that she had, and it just scared the daylights out of everyone," DiMarzio said. "When she showed up and we started walking to her spot [on the trail], people were jumping out of line to try to take selfies with her. She had the teeth and everything; it was awesome."

If scary isn't your thing, there are plenty of other Halloween-themed activities to indulge in for everyone.

The local community center hosts a costume and line dance party for seniors who are able to enjoy socialization, snacks and games. It also puts on Halloween-centric arts and craft classes for kids.

Parents who don't want to be out late at night with their children can also participate in the daytime trick-or-treat downtown from 2 until 5 p.m. on the last Friday of October. Downtown storefronts and businesses open their doors and hand out candy in what has become a longstanding tradition for Fuquay-Varina residents.

"I helped start the trick-or-treat from business to business. There were lots of people bringing their kids down," said Susan Weis, director of communications for the town. "It's a tradition and people look forward to it. You could talk to high schoolers now that say, 'Oh yeah, I remember when I did that.' It's a sweet little thing for the kids."

Weis added, "It's a great thing for the parents. They know it's safe, they know it's in the day, it's easy, but it's fun. Their kids get excited and happy about it."

All people have to do is spot the "trick-or-treat here" signs in storefront windows as they meander down the quaint streets of downtown Fuquay-Varina, making it truly feel like a Halloweentown.

Weis described Halloween as a "fall rite of passage" and said when she moved to the area 15 years ago and realized how festive the community was with celebrations like Halloween, she felt like she had "found her people."

DiMarzio described Halloween as an "ageless holiday" that gives everyone a chance to be fun and goofy.

"I think that's the thing about this community, why Halloween fits so well here is that we're young, but we're also old," he said. "You get to put that mask on and be something else for the night."

Weis said, "We like to have little kids, big kids, all the kids out. You'll [also] see that our breweries will have festivities for the adult trick-or-treaters. You've got the kid stuff, you've got the teenage stuff — it's really just a celebration of the fall, if you will, and taking the opportunity to celebrate at every chance we get."

This article was written for our sponsor, Fuquay-Varina.