Funeral to be held Friday for fallen Nash County deputy

Rocky Mount, N.C. — A funeral will be held Friday afternoon for Nash County Deputy Jared Allison, who died this week from injuries he received in a crash on Thanksgiving.

Local law enforcement agencies joined a procession Wednesday, and Gov. Roy Cooper ordered North Carolina flags at state facilities to be lowered to half-staff through Thursday in honor the deputy.

Nash County Sheriff Keith Stone said Allison was attempting to stop a speeding motorcycle on U.S. Highway 301 on Thanksgiving night when his patrol SUV collided with a Nissan Maxima trying to cross the highway from May Drive.

Allison's SUV hit the median and overturned, and he was thrown through the passenger-side window.

The motorcyclist hasn't been identified, and no charges have been filed in the case. 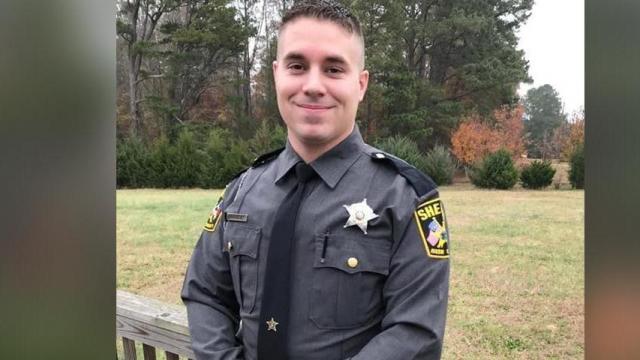 Allison served with the Nash County Sheriff's Office for two-and-a-half years and was assigned to the office's traffic team. His father served as a police officer in Cary and Morrisville. Out of respect, those two departments sent cars to join the procession honoring Allison.

In an emotional tribute, his father said Allison was his friend and a true hero.

Allison's family joined in the procession.

"We ask everyone keep Jared's family as well as our deputies in your prayers as we all grieve the loss of a hero who made the ultimate sacrifice while serving the citizens of Nash County," said Stone.

"It's very, very difficult. It's very difficult as me being a leader sending these people out here to do a duty to serve and protect," he added.

Allison was an Army veteran and an avid animal lover and rescuer. He is survived by his 9-year-old son, wife and parents. A GoFundMe page initially started to help with medical bills raised more than $26,000 over the past five days.

WRAL News received messages sharing random acts of kindness that Allison had performed. For example, he once donated money out of his own pocket to buy a car for a woman who left an abusive relationship.

He's being remembered for those acts of kindness and service to his community.

The funeral will be held on Dec. 4 at Englewood Baptist Church in Rocky Mount.