OSLO, Norway — It was already past midnight Friday when the news arrived in Norway: A day after meeting with Norway’s prime minister in Washington, President Donald Trump told members of Congress that the United States needed more immigrants from places like Norway and fewer immigrants from countries like Haiti.

Many in this prosperous Scandinavian country were already asleep, but several prominent Norwegians who were still online took to Twitter to vent their outrage and disgust, not only at Trump’s vulgar language but at what many saw as a racially tinged insult.

“The real White House: Trump calls Haiti and African countries ‘shithole’ countries to the face of members of Congress, and uses Norway to prove his racism,” wrote Andreas Wiese, a newspaper commentator who manages the House of Literature, a popular cultural center in Oslo, Norway’s capital. 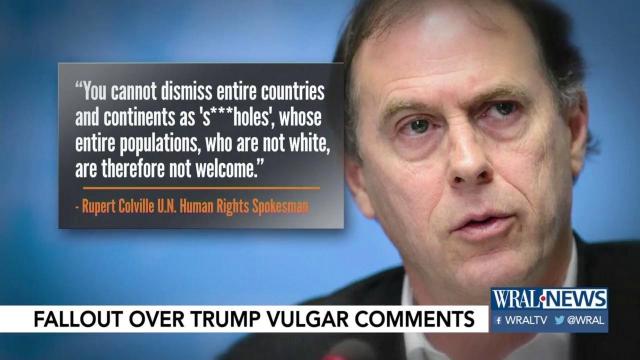 Prime Minister Erna Solberg’s visit to Washington to meet Trump — where they held a joint news conference Wednesday at the White House — was big news in Norway, and the encounter had not gone without a hitch: Trump pointed to the sale of U.S.-made “F-52s and F-35 fighter jets,” a remark that puzzled many listeners since there is no such thing as an F-52 fighter jet. (There are F-52s in the video game “Call of Duty: Advanced Warfare.”)

Helge Ogrim, a veteran journalist who used to cover the United States for the Norwegian News Agency, said of Trump’s latest remark: “It falls into a pattern of nativist and very unpleasant language from a poorly qualified president, if not worse. President Trump seems to relish in derogatory remarks about others and praise for himself. This incident, just after his blunder with the fictional ‘F-52’ planes, further lowers the respect for his office and for the U.S. abroad.”

JUST IN: Pres. Trump does not respond when asked during an event honoring MLK if he described African nations with the term "shithole," if he will apologize and if he is a racist. https://t.co/tHk5hLN24j pic.twitter.com/kf0JJpwdL8

Ogrim cautioned that journalists should not overreact to Trump’s remarks. “These are somewhat small matters and the frenzy with which they are reported does not perhaps always help the media in their just fight with a president who is doing his best to undermine them and their importance,” he said. Gudmund Hernes, a former minister of education and minister of health from the Labor Party, wrote sarcastically on Twitter: “Erna worked: Norwegians are welcome.” (Solberg is from the Conservative Party.)

This was not the first time Trump had rankled Scandinavians with off-the-cuff remarks. In February, he puzzled and alarmed Swedes when, in a speech discussing refugee policies in Europe, he suggested that a terrorist attack had occurred “last night in Sweden.” No such thing had taken place.

“Does Trump know that Norway is neighbors with what-happened-last night-in-Sweden?” a Swedish social worker, Ulf Fogelstrom, quipped on Twitter.

Trump was then rebuked Friday by the United Nations human rights office, which described his comments as dangerous racism that opened the door to humanity’s worst characteristics.

“These are shocking and shameful comments from the president of the United States,” Rupert Colville, a spokesman for Zeid Ra’ad al-Hussein, the U high commissioner for human rights, told reporters in Geneva. “Sorry, there is no other word one can use but racist.”

Norway (population 5.2 million) and Haiti (population 10.9 million) are both relatively small countries, but their situations could hardly be more different. Norway is one of the world’s wealthiest nations, with rich oil reserves, a mighty sovereign wealth fund and a gross domestic product per capita that is about 23 percent higher than that of the United States. Haiti, the world’s first free black republic, is one of the poorest countries in the Western Hemisphere.

My dad came from what I guess Trump would call a "shithole" country. He was able to come to the U.S. and became a very proud American. pic.twitter.com/FXbTu8i1HJ

Both countries have close relationships with the United States but from very different positions of power. Norway is a member of NATO and a close military and security ally of the United States. Haiti was occupied by U.S. Marines from 1915 to 1934, and U.S. troops have intervened several times since. The United States has also been a significant source of aid to Haiti in the wake of several natural calamities.

Haitians and members of the Haitian diaspora were aghast upon hearing of Trump’s latest remarks.

Paul G. Altidor, the Haitian ambassador to the United States, said that Haitian officials “vehemently condemn” Trump’s comments, which he said were “based on stereotypes,” according to Yamiche Alcindor, a journalist reporting for the program “PBS NewsHour” who interviewed him. “Either the president has been misinformed or he is miseducated,” she quoted him as saying.

Alcindor, who is Haitian-American, also quoted Altidor as saying: “Haitians fought along U.S. soldiers in the Revolutionary War, and we continue to be great contributors to American society.”

Frantz Duval, the editor-in-chief of Haiti’s largest newspaper, Le Nouvelliste, took to Twitter to describe Trump’s words as an opportunity to rouse Haiti’s citizens and rebuild the country, which is still recovering from a deadly earthquake on Jan. 12, 2010:

“Now that the whole world is aware, are we going to take pleasure in this image?” he wrote. “Nothing to change it? Are we going to continue to feed the clutter and silly stupid things that serve us as ornaments?”

Raoul Peck, a Haitian filmmaker and former minister of culture, cast blame on Americans who were “enabling” their president.

He accused Republican lawmakers and Trump voters of “protecting even his most outrageous behaviors,” saying that if they do not “stand up to this sickening and suicidal pathology, they will go down in history as not only accomplices, but as James Baldwin would say, as criminals.”

Haitian-Americans also expressed anger. “Your words are unkind, untrue and divisive,” Garcelle Beauvais, an actress who was born in Haiti, wrote on Twitter. “We deserve an apology.”

Karl A. Racine, the attorney general for the District of Columbia, wrote on Twitter: “Immigrants add immeasurable value to our city and our nation — and they deserve respect. I am proud to be Haitian-American, and I will continue to fight for the dignity and safety of every member of the District’s immigrant communities.”

In Quebec, where thousands of Haitians have been streaming since this past summer after the Trump administration signaled that the United States would no longer provide Temporary Protected Status for some 59,000 Haitians in the United States, local Haitian leaders reacted with anger to Trump’s words but were not surprised.

“We know who he is, and what he says doesn’t surprise anybody,” said Marjorie Villefranche, director general of La Maison d’Haïti, a Haitian community organization in Montreal. “What Trump said is racist, and it is irresponsible because it threatens to encourage discrimination. That is why Haitians are hurrying to come here.”

Villefranche said that local Haitians lived in fear of Trump after his administration announced in November that it was ending the humanitarian program for Haitians, established after the devastating 2010 earthquake in Haiti, that had allowed them to stay in the United States. Now, Haitians in the country under the program are expected to leave the United States by July 2019 or face deportation.

In El Salvador, where the government is still digesting Trump’s announcement Monday that nearly 200,000 Salvadorans granted Temporary Protected Status in the United States since 2001 will have to leave by 2019, Carlos Calleja, a businessman and civic activist who is running to be the presidential candidate for the right-leaning Nationalist Republican Alliance, called for unity.

“Our relationship with the United States is a special, historic one, and it will continue to go on,” he said Thursday night. “We can’t allow ourselves to be distracted by things like this. There are more important issues to address, specifically the millions of Salvadorans living in the United States that we care deeply about.” The United States has had a long history of favoring immigrants from some countries over others. For much of the period from the 1890s to the 1920s, when immigration from Southern and Eastern Europe was at its peak, nativists asked why immigration from Western and Northern Europe had slowed. Religion was a factor: Many of the immigrants then were Catholics and Jews, unlike their Protestant predecessors. In 1965, old quotas based on national origins were replaced by the current system, which has been accompanied by sharp increases in migration from Latin America, Asia and Africa.

Mae M. Ngai, a historian at Columbia University who has written extensively on Asian immigration to the United States, expressed dismay at Trump’s remarks.

“His vulgar racism is exceeded perhaps only by his ignorance,” she said. “Countries like El Salvador and Haiti are in terrible condition in large part because of long histories of U.S. support for right-wing dictatorships and crony capitalism. And why would anyone in Norway give up their social benefits — universal health care on a single payer system, no college tuition, and the like — to come to the U.S., which has none of it?”

“Let us focus on the overwhelming positives of migration and use facts, not prejudice, to address its challenges,” he said.