From Mexico to the U.S., a NAFTA Tale of Two Truckers 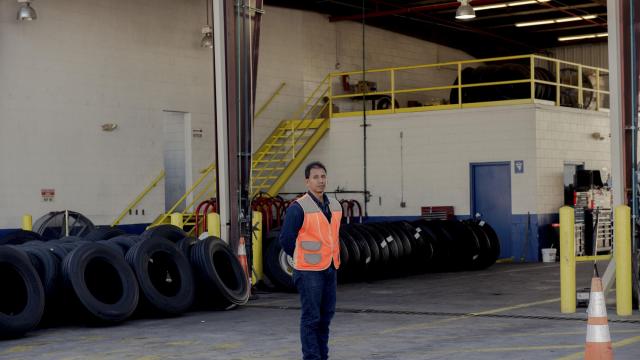 The two men haul goods that travel from Mexico into the United States. Both come from a Mexican border town infested with drug cartels. But Flores got out.

He became a U.S. citizen, giving him the right to drive through the American heartland and earn good money delivering washing machines and broccoli sent from Mexico. Miranda, a Mexican national, doesn’t have that option. He can make only short trips, back and forth across the border, from a lot on the southern side to truck lots 24 miles to the north.

Under the North American Free Trade Agreement, signed in 1993, the United States agreed to eventually let drivers like Miranda deposit their cargoes anywhere. Then the union representing truckers revolted, staging protests at the border and pressuring the White House to abandon the idea.

So ensued a decades-long cage match, waged by American truckers, clinging to a stronghold of blue-collar work, and their Mexican counterparts, desperate to claim territory they had been promised. In 2015, the Obama administration finally allowed Mexican drivers to seek permission to travel beyond pockets of land along the border.

Only a handful do so. But the fight has entered a new round, with a U.S. president who has shown a special fondness for truckers and their big rigs. The Trump administration has thrown its America First agenda behind the cause in the NAFTA negotiations, demanding that Mexico agree to a provision that could, in the future, block its drivers from making deliveries into the middle of the United States.

Mexico has rejected that suggestion outright, challenging the fairness of shielding a slice of laborers from low-paid foreign competitors, in a trade deal meant to allow most everything to flow freely across borders.

The dispute offers a window into the stakes involved in rewriting, or blowing up, an agreement that has become highly contentious but also extremely lucrative for all sides. It also hints at the impact that market forces — more than rules agreed to on paper — may have on the ways two nations exchange wares.

More than $525 billion in goods travel between the United States and Mexico in a year, and most come on trucks. The tension over who gets to profit off that flow can be boiled down to the handoff, from a Mexican to an American, of 64 refrigerators destined for Texas.

The journey began on a recent Thursday at a lot in northern Mexico, distinguished by a taco truck and not much else. A group of drivers, all men, formed a line outside a dispatch window at Fema, one of Mexico’s largest trucking companies, waiting to find out what they’d be lugging into the U.S.

Someone else had brought the trailer filled with LG refrigerators to this spot. Miranda’s job was to take them across the border to a lot in Laredo. He travels this route multiple times a day. The work is rote, but never-ending. Miranda works up to 18 hours a day, six days a week. “I lost my family because of this work,” Miranda said. He is 36, with a thinning hairline, but could pass for a teenager when he smiles. He has the plaintive look of a man who has spent years appeasing heavily armed men at border checkpoints.

This town, Nuevo Laredo, sits just below Texas and right above an area in central Mexico that foreign car- and aircraft-makers transformed into an international manufacturing hub over the last 30 years.

As trade between Mexico and the United States exploded in the wake of NAFTA, new career paths emerged for men like Miranda.

When he took the job, his idea was to pay off the loan on his house and save up enough to send his young son to school. As it turned out, his job took him away from home so much that his wife asked for a separation a few months after he started. His family lives in town, but he worries about how his son is handling growing up in a home with only one parent.

“I didn’t think it would be such a sacrifice,” Miranda said.

Each time he crosses the border, the trucking company pays him around $12, he said. On a good day, he can make the trip four times. When traffic piles up, he can go only once.

The line that Miranda endures on his way into the United States can last more than three hours. A red light flashed as he passed through the border. “Bad news,” he said. He had been randomly picked for an inspection at the Customs and Border Protection checkpoint.

Normally, even after the border wait, the inspection alone takes three hours. Drivers waiting their turn sprawl out on spartan benches and tables, blistering in the heat. While agents in an air-conditioned office pored over an ultrasound of the inside of his truck, and riffled through his documents, Miranda stood and watched.

The conversation eventually turned to President Donald Trump, for whom Miranda has a measure of respect. “He has good things and bad things,” he said. “He’s protecting his country on the one hand, but he’s also making relations bad.”

Miranda got the clearance to head north. He set off on a 20-minute drive to Werner Enterprises, a giant in U.S. freight. When he arrived at the terminal, a pristine repository for shiny blue tractors, he backed his 53-foot trailer ever so gently into an open slot, unhooked his cab and drove off.

He dreams of trucking across Texas, through Oklahoma, all the way to Michigan. His weekly pay, he reckons, would triple.

It might seem more efficient to hire Miranda to take the refrigerators directly to their final destination. For 20 years, though, the Teamsters union persuaded lawmakers to stop Mexican trucks from driving beyond parcels of land that hug the border from California to Texas. The union and its ally, an association for independent drivers, argued that Mexican truckers would cause fatal accidents, pollute the air with old big rigs and steal jobs from Americans.

When President Barack Obama ended the moratorium in 2015, almost nothing changed. Only 38 Mexican carriers were authorized to make deliveries past the border zone, with fewer than 500 drivers — Miranda not among them. By comparison, more than 30,000 Americans haul NAFTA goods from Mexico and Canada.

Derek J. Leathers, chief executive of Werner Enterprises, said there was little appetite among Mexican trucking companies. “Mexican carriers by and large do not have a burning desire for their trucks and drivers to deliver into the U.S.,” he said. “It’s a special environment with special expertise required.”

Insurance providers charge Mexican carriers higher rates, as they do with any driver lacking a track record on U.S. roads, trucking officials say. There is a constellation of U.S. rules and regulations that don’t exist in Mexico. The truckers have to speak some English.

And there often isn’t anything for Mexican drivers to take back after they drop their trailers off. The United States buys more from Mexican companies than it sells to them. Like foreign airlines, Mexican truckers can’t take things between two U.S. locations; they can only go in and out. Returning with an empty trailer means there’s probably no shipper paying for that leg of the journey.

The fight to keep Mexicans out by law is senseless, Leathers said, because the market is already weighted against them.

That hasn’t convinced American truckers or their advocates, who have seen what happened to factory jobs and refuse to trust politicians or executives who tell them that all will be well. All the economic obstacles standing in the way of an onslaught of Mexican drivers can be overcome with enough money, they say.

“I could see some private equity group saying: ‘Let’s buy a trucking company. Let’s exploit NAFTA,'” said Rep. Peter A. DeFazio, D-Ore. “'We are going to enhance the value of this asset by firing all the American workers and replacing them with $2.50-an-hour Mexican drivers.'”

At Werner Enterprises, Flores hopped into his tractor as soon as he got the word from his bosses. He wove his way through the parking lot, stopping at the trailer that Miranda had just abandoned and linking it to his cab.

He was heading for San Antonio, with the sun setting and spilling blood orange onto the horizon. Flores’ truck blared with an alarm that he couldn’t turn off. He turned up the classic rock on the radio to drown out the sound.

“I don’t think that’s cool that those guys can just come with no papers,” Flores said. “They don’t have to pay for training. They don’t have to pay for citizenship like me. They come over here and are laughing at us. It’s unfair.” When Flores started driving for Werner, as an employee, he worked himself to the ground and earned a fat paycheck. He spent three weeks on the road, driving from Texas to Canada and back, sleeping at truck stops in between. He would then return for a weekend in Brownsville, Texas, to see his wife and children.

Then one day, his 7-year-old daughter’s legs swelled up and she stopped walking. A specialist in Houston diagnosed angioedema, an uncurable disease involving swelling of deep layers of skin. Flores decided to take on a shorter route so that he could spend more time at home.

“When something like that happens, you don’t care about making money,” he said.

Now 55, he lives with his family in San Antonio and works as an owner-operator, meaning he bought his truck but has to cover the hefty cost of maintaining it.

Flores doesn’t have a personal beef with the trucker who brought the trailer here, he said. Flores has never met Miranda, but he, too, was born in Nuevo Laredo. In 1991, he moved to Brownsville and got married. He and his wife earned money by baking and selling traditional Mexican cakes outside offices. It took him a decade to get his citizenship and cost $1,000 for lawyers and fees.

It may sound strange that an immigrant like him wants to keep Mexicans off his route. But Flores sees himself as an American who earned the right to this work. One in every five people in the business of transportation is an immigrant, according to the Pew Research Center.

“Those guys just want to come here, make their money and go home,” Flores said. “I spend my money here. I bought my house. I pay my taxes.”

With that, Flores pulled up to the final checkpoint these refrigerators would pass through that day before winding up in San Antonio. It is the line that Mexican drivers can’t cross without a permit — the end of the border zone. An officer held a hand up.

“Yes,” Flores said, before maneuvering his truck onto the highway, on his way home.