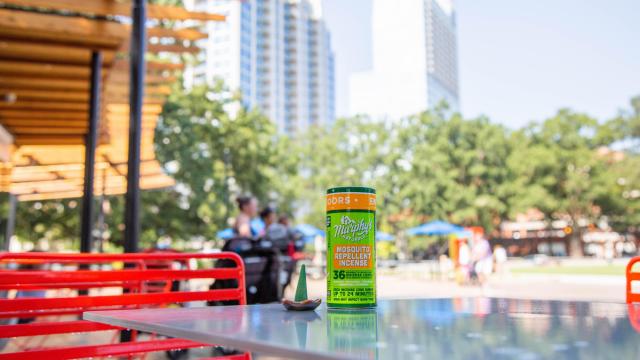 This article was written for our sponsor, Murphy's Naturals.

Philip Freeman will be the first to tell you: he's a lucky guy. But it isn't just luck that got him to where he is now.

Commissioned as a Naval Officer after graduating from Virginia Tech in 1987, Freeman served in the Navy for eight years. He had always had an entrepreneurial spirit, and following his service, he decided to tap into those skills, dig up some of his old business plans, and see where things led.

"For years and years, I created business plan after business plan and filed them away. Most of them were about solving a problem I saw in everyday life, but a few of them were pretty innovative," Freeman said. "After my time in the service and after a couple of decades in professional life, I finally decided I would develop a product and launch a brand, but what?"

In combing through his business plans, Freeman found a few ideas that had already been done, a few ideas that were outdated, and a few that could be diamonds in the rough. But the actionable idea he landed on didn't actually come from any of his old schemes. Instead, he found himself looking to solve an everyday problem.

"I noticed my wife getting 10 mosquito bites compared to my one, and the only thing that would keep the mosquitoes away was DEET-based spray. We didn't like the way those products felt on our skin and really didn't know what was in the products, so I checked out the market for natural repellents," Freeman said. "What I quickly found was there were not many good options on the market. I researched and determined that there was an opportunity for a better natural repellent than what was available. A couple of them were OK, but not great. This was the opportunity."

After a few years of research, self-testing and tweaking, Freeman found the solution: a natural product brand that uses sustainably sourced ingredients to repel insects, dubbed Murphy's Naturals. The company was named after Freeman's best friend, his dog Murphy, who would always accompany him on outdoor adventures — including those first few months when Freeman and his wife Pam would sit in the garage packing up orders for shipping.

To this day, Freeman fondly recalls how excited Murphy would get when he heard the UPS truck pull up to pick up their latest round of shipments — partially because the driver always had a treat for Murphy in hand.

While Murphy isn't around to accompany Freeman on adventures anymore, the memory of his loyal companion pushes him to make the best possible product in his honor.

"Murphy was the greatest dog, so it's my mission to ensure the company named for him is the very best natural products brand for outdoor living. Murphy was exceptionally gentle and kind, so it is only appropriate that Murphy's Naturals is equal part products and equal part heart," Freeman said. "Doing Others Good — 'D.O.G.' — will always be at the core of our brand."

While success didn't happen overnight, once operations started to pick up, Freeman knew packaging orders in the garage wasn't going to cut it anymore. The company first moved to a larger space it outgrew in just six months, then found its next and current location at the Loading Dock in Raleigh, which, while now is a popular co-working space, was little more than a rundown old warehouse at the time.

After taking over the space at Dock 1053, however, Freeman saw the potential to support the community in yet another way.

"We decided to get even more space than we planned, then we thought it would be cool to share this space with other entrepreneurs. So we made the decision to launch a co-working space. We knew what it was like as a product manufacturer and how difficult it was to start, so we thought it would be great to create a space we could share with others and collaborate with a co-warehouse concept," Freeman explained. "We were essentially a startup [Murphy's], starting a startup [Loading Dock] for startups [The Loading Dock community]. Financially, it wasn't the smartest thing to do at the time, but looking back it was absolutely the best thing to do."

And that extra space is much-needed. Murphy's Naturals is constantly adding new products and has distribution everywhere from local grocery stores to big chains like Target and Wegmans — although 75 percent of its distribution is done online.

In addition to producing insect repellants like sprays, balms and candles, the company also manufactures hand sanitizer. In the midst of COVID-19, this pivot has been yet another way for Murphy's to serve the community and give back in whatever ways it can.

"We qualified for and adjusted our resources and equipment to manufacture hand sanitizer. It started as an effort to support our local community and the co-working community, but it has evolved into more than we intended," Freeman said. "We now have the opportunity to Do Others Good in a much larger way, by providing a much-needed resource, and we even got the chance to provide hand sanitizer to my old employer, the U.S. Navy. We've stepped up our giving and support locally, and we hope, by example, we will inspire others to do the same."

It's this commitment to doing good and serving the community that has been a common thread since Freeman started the company.

Murphy's Naturals' official mission is to celebrate nature and inspire good through quality natural products — a mission that, according to Freeman, is made up of few words, but packs immense purpose.

"When you do good, you inspire good. We lead by example, we do the right thing, especially when doing the right thing isn't the easiest option. We make quality natural products, not because we have to, but because we want to," Freeman said. "Our goal is for the consumer to trust us as a brand. That takes time, and it takes a long history of consistently producing quality natural products that are good for you and do good through their purchase."

And still, after all the hard work put into his company, Freeman will be the first to credit his luck.

"I'm a lucky guy to lead such a dynamic company filled with such wonderful team members."

This article was written for our sponsor, Murphy's Naturals.