From Encyclopedic Collector to ‘Wikipedian-at-Large’ 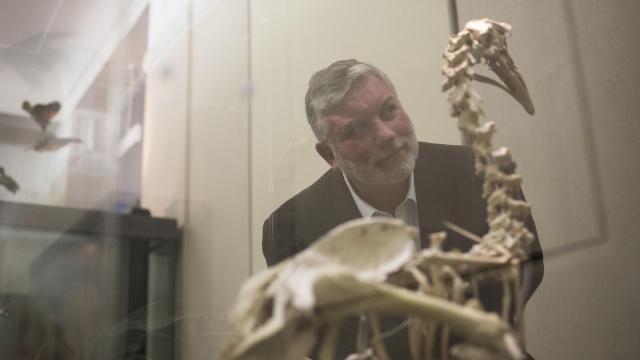 AUCKLAND, New Zealand — In the grand library of the Auckland War Memorial Museum on a Saturday morning in August, a small group of new and slightly nervous Wikipedia editors gathered for a day of training that would arm them to tackle New Zealand’s lackluster representation on the crowdsourced online encyclopedia.

Leading the so-called Wikiblitz was New Zealand’s official Wikipedian-at-Large, Mike Dickison, 49, who has in some senses been preparing his entire life for this post. As a collector of things and knowledge, he has pursued a string of enthusiasms, beginning with insects, shells and feathers (he put together his own museum as a boy), then giant flightless birds (a Ph.D. on those), that ended, appropriately enough, with a job as the natural history curator at a museum. He once taught a class in knitting as therapy for stressed-out men after a major earthquake.

For the moment, he was involved in something a little less fascinating, guiding the group through the process of adding photos from the museum’s collection to pages on Wikipedia. The new editors — curious members of the public, many of whom had created their accounts the evening before — were mostly women, a fact Dickison was pleased to note; Wikipedia records its editors as 90 percent male.

“Be bold! Don’t be stymied by worry,” Dickison told the group, assuring them that early in his Wikipedia career, he had accidentally “blanked” more than one entire page by mistake.

As the country’s roving Wikipedian-at-Large, he is spending a year coaxing New Zealanders to take up volunteer editing on what is the world’s fifth-most-visited website. His salary and travel are funded by a grant from the Wikimedia Foundation, the nonprofit that runs Wikipedia, as part of its investment in “emerging communities” on the site, including New Zealand.

The South Pacific country is underrepresented on Wikipedia, and Dickison described the state of many of the country’s pages as “dire.”

His skills are self-taught, but Dickison’s affinity with Wikipedia’s gathering of community knowledge is the culmination of his lifelong obsession with collecting. Growing up in Christchurch, on the South Island of New Zealand, the son of an apprentice boilermaker father — who later ran a sporting goods store — and a homemaker mother, Dickison felt he was “destined” for a museum curator’s job.

What started as a typical childhood infatuation with dinosaurs developed into a fascination with the moa, a giant flightless bird native to New Zealand, which is now extinct. Dickison’s father, who had left school at 15, encouraged his son’s enthusiasm for curating. He built the glass display cases where his son could display his treasures in his “museum.”

Even then, Dickison was irked by the lack of available information about New Zealand’s native fauna.

His preoccupation with the moa led Dickison to complete a Ph.D. on the subject of giant flightless birds at Duke University decades later.

“I had no idea where North Carolina was or any fact about it whatsoever,” Dickison said. “The only Duke I knew was ‘The Dukes of Hazzard.'” The appeal of giant flightless birds, to Dickison at least, seemed simple: “They’re just enormous. They’re really big. I mean, why do kids like dinosaurs? Because they’re huge.”

He dreams of traveling back 1,000 years in time to see the moa in its natural New Zealand habitat before it was wiped out by Polynesian settlers 500 years ago. He has even investigated the taxonomic origins of the “Sesame Street” character Big Bird (his conclusion: a giant flightless crane).

His enthusiasm for the smallest pieces of knowledge — Dickison’s website includes a map recording everywhere in the world he has received a haircut — led to a day job as natural history curator at Whanganui Regional Museum, on the North Island. But by night, he was beginning to rack up hours as a volunteer editor on Wikipedia, and he ran workshops training other new editors at a local library.

His edit history, which began in 2009, is not quite as lettered as his museum pedigree: Dickison made some of his first contributions to pages about Jaffas, a type of New Zealand candy, mandolins and the film “This Is Spinal Tap.”

He realized toward the end of his tenure as a natural history curator, he said, that the work he did on Wikipedia in his free time had “much more impact” than what he did at his day job.

After his application for a Wikimedia Foundation grant for the national Wikipedian-in-residence role was successful, Dickison said, he left his job, “filled my four-wheel-drive with plastic bins of worldly possessions and launched off around the country on an adventure.”

Dickison is no stranger to connecting unlikely groups of people. Upon his return to New Zealand from Duke, the sometime ukulele player was frustrated by the lack of sheet music for New Zealand standards. So he wrote a book of local songs for ukulele and traveled the North Island, teaching and performing them.

After a deadly earthquake struck his home city of Christchurch in 2011, killing 185 people and flattening much of the central city, Dickison ran the knitting-as-therapy class, having taught himself first as a way of dealing with the aftermath of the quakes.

In the 1990s, he had hosted sessions in internet cafes to help newcomers explore the World Wide Web.

“I don’t understand why I do these things,” he said. “I’m supposed to be an introvert.”

“But if I find something I’m passionate about, I need to share it and get other people involved, too,” he added.

The fate of Christchurch was a cautionary tale about the need for societies to preserve their information, Dickison said. When the 2011 earthquake struck, every formative place from his childhood was destroyed, including his family home and former schools.

“Google Street View was still running images of prequake Christchurch for a while after the earthquake, and there was a huge worry that they would take those down and replace them with up-to-date views,” he said, adding that images of the city before the disaster had now been archived and preserved.

“I feel like we’ve been a bit cavalier about looking after knowledge in New Zealand,” Dickison said. “Too often, it just slips away.” As part of his Wikipedian-at-Large role, he is charged with recruiting others to help preserve that knowledge online, with a particular emphasis on women and minorities, who are underrepresented in New Zealand’s small editing community. He plans more meetups and training sessions like the one at Auckland Museum, and he will be resident around the country at locations including a government department and a bird sanctuary.

Dickison also hopes to entice reticent public and private institutions to crack open their vaults of knowledge and expertise, making them more accessible for editors to use while editing Wikipedia.

“I often have experts tell me they read a Wikipedia article that they know something about and it was full of inaccuracies,” he said.

“I always say, ‘Well, did you fix them? And if you didn’t fix them, why are you complaining to me? It’s like walking outside and complaining that it’s raining and not putting up an umbrella. Of course you’re wet!'”