French Citizens, Weary of Macron’s Vision, Want Him to Feel Their Pain 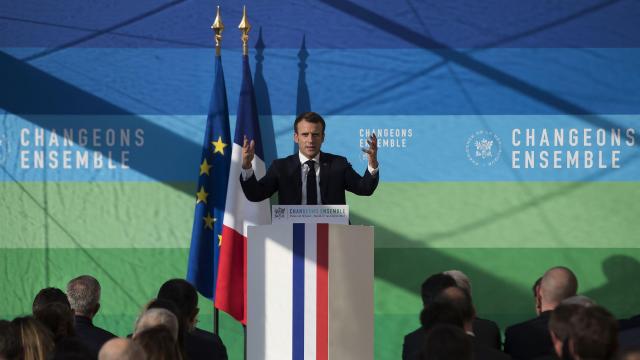 PARIS — President Emmanuel Macron of France has rolled out one ambitious change after another as he seeks to inject some dynamism into France.

He has lightened a voluminous labor code. He has taken on once-powerful unions. He has trimmed funds to village mayors. And on Tuesday he put forth one more: a bold vision of an “ecological transition” that promises to shutter 14 nuclear reactors by 2035 and to reduce the use of fossil fuels.

But as with each of his past steps, Macron did not have to look far for evidence of just how much his long-term vision for France is failing to meet its citizens’ immediate and more urgent needs.

Ordinary people say the president’s speechifying about the fate of the planet overlooks the month-to-month struggle of their lives, and they are demanding he listen.

“He seems to be deaf,” said Fabrice Schlegel, who has helped lead some of the citizen protests that have convulsed France in recent weeks. "He’s talking to us about the ‘ecological transition.’ This is a politician who is floating in outer space.”

There was chaos in Paris on Saturday, and more unrest is promised this weekend, all driven by anxiety about stagnating wages, fuel taxes and how to pay the monthly bills.

The mass protests, organized on the internet, have sprung up out of nowhere and now cover the entire country. They are taking place outside the ranks of any political party or union and have shifting leadership. Many of the protesters say they have never before gone into the streets, and don’t even vote.

These protests, which some historians are comparing to the peasant revolts of the 14th century, may now present the most dangerous challenge yet to the young president, who has promised to transform not only France’s energy industry, but also parts of its economy and the social safety net that he argues France can no longer afford.

On a day when Macron had long planned to promote his energy program, he was instead forced to devote much of his speech not to the greening of France, but to its yellowing — the "Yellow Vests,'’ as the protesters are called, after their symbolic roadside safety vests.

Yet despite his insistence he understood the people’s pain, the president offered no relief — particularly from an especially hated gasoline tax increase — and the speech struck many as out of sync with the political moment.

As he spoke, French television showed images of the citizen protesters who filled the streets of Paris last weekend. That France, the world’s most nuclear-dependent country, may reduce its use by 50 percent, was a matter of relative indifference to them, they said scornfully in interview after interview.

From the moment he took office, the problem for Macron has been that the sweep of his vision was always greater than the actual depth of his support.

Untested as a politician, the former investment banker was elected virtually by default in 2017, running an insurgent campaign after he had bolted from the failing Socialist party, where he never quite fit in. The center-right politician who had been the front-runner, François Fallon, collapsed under the weight of a scandal. Many French voters said they could not vote for the far-right alternative, Marine Le Pen.

The French took a chance on a fresh face and voted for change, but perhaps got more than they had bargained for. It is a deal now instilling a certain buyer’s remorse among voters and coming back to haunt their audacious yet politically naïve leader, who has been dropping steadily in polls.

On Tuesday, Macron insisted several times that he understood the tense situation prevailing in his country.

“I understand this fear,” he said in his speech. “I hear this discontent. I’ve heard this anger, which has its share of legitimacy.”

He promised a “big” meeting “at the grassroots,” including members of the Yellow Vests, to come up with “solutions.”

But Macron did not vow to pull the gas tax increase that has spurred many protesters into the streets. He did not vow to fight for the higher wages, which Saturday’s protesters, many of them working women and men, said were essential to their survival.

He did not vow to lighten the tax burden on ordinary French people, which has increased by 25 billion euros every year between 2002 and 2017. The only possible compromise was a promise to review gas taxes every three months.

As a result Macron may have failed to hit his mark in Tuesday’s speech. The negative reactions from the Yellow Vests in wall-to-wall coverage on France’s news channels, as well as the pans of his speech from Yellow Vest leaders in interviews, suggested as much. Macron’s repeated expressions of sympathy and understanding failed to move his audience.

They disdained his eloquence and his acknowledgment that many of the Yellow Vests had been placed in an impossible situation — forced out of the cities by high housing prices, and now priced out of rural areas by rising gas prices.

“I believe I understand, very deeply, the hopes and the frustrations, this silent anger, this resentment and rancor, that the citizens are feeling faced with officials who seem distant, indifferent,” Macron said with a flourish.

Those words did not appease Schlegel, the protest leader, who describes himself as an entrepreneur. “It was far from what is needed,” he said by phone from the Jura, an area near the Swiss border. “He’s not hearing the anger. This was pure Macron. The state’s percentage in EDF” — the largely state-owned electricity company — “the French just don’t give a damn about that.” Another Yellow Vest leader was equally critical.

“Mr. Macron put oil on the fire in not responding to the anger and suffering of the French,” said Benjamin Cauchy, an insurance executive in Toulouse. “He’s shut himself up in this ‘ecological transition,’ but he didn’t respond to the fears about low salaries and dropping purchasing power.”

“I’m disappointed and scared because he didn’t understand the anger,” Cauchy added. “He’s responding to all the emotion with technical measure.”

Macron holds a big majority in the French Parliament, but even among members of his own political movement, La Republique en Marche, or Republic on the Move, there were expressions of disquiet.

“He was elected to reform the country, but his reforms are seen as inegalitarian,” said Patrick Vignal, a deputy in Parliament from Macron’s party. “These are people who feel they are slipping, socially,” Vignal said. “We’ve got to show them proof that we care for them.”

“It obviously wasn’t at all the speech that the French, who are in despair about their end-of-months, were waiting for,” said Le Pen. “There’s a total absence of response to this French anguish. It’s really incomprehensible,” she told reporters at the National Assembly.

Macron’s main opponent at the other end of the political spectrum, the far-left leader Jean-Luc Mélenchon, said the “president has run out of gas. He’s just piling up the phrases. And he’s not measuring the gravity of the situation. The barricades have gone up, all over France.”

Schlegel said the Yellow Vest movement was not finished.

“This situation is continuing to evolve,” he said. “People haven’t come this far for nothing. He hasn’t discouraged anybody. Just the opposite.”