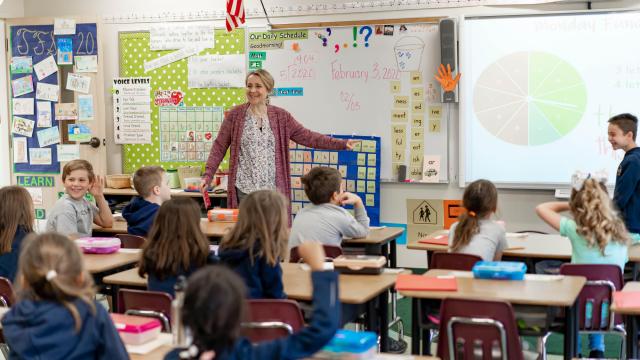 Twenty years ago, The Franciscan School in Raleigh opened its doors for the first time, prepared to bring Catholic values and innovative curriculum to the 345 students enrolled. Now, two decades later, the size of the student body — and the campus in general — has nearly doubled.

Principal Mike Watson has been involved with the Franciscan School since almost day one, first as a parent, then as a faculty member. The school was born out of an interest to serve the entire parish, including parishioners and their families; not as an expensive, exclusive institution, but as a establishment built on Catholic ideals and dedicated to providing a holistic education.

"The point of the school was to be set up a little differently than what had been done in other areas, especially the northeast. The school is not an elite school in any way, even though we charge tuition. Instead, it was to be a school that was in line with the Franciscan charism — dedication of service to others," Watson explained. "We are a ministry of the parish, which means that we're here to further the values and the mission of larger parish. Part of that is through education, of course, both in the Catholic faith and in providing a great academic experience for all of our students."

Although the Franciscan School teaches ideals of the Catholic church, it has been open to all students, no matter their background or faith tradition, since its inception. This openness has been instrumental in fostering the strong community that has now become synonymous with the school.

Over the years, Watson has seen the Franciscan School experience changes both big and small, including faculty additions and a campus expansion in 2011.

Previously, the school conducted all classes and activities in four buildings on one end of the property. In 2010 and 2011, they added a gym, a community center and a middle school building with 12 additional classrooms, not only expanding their on-campus footprint, but also increasing the school's ability to serve the families of the parish.

In celebration of the school's 20th anniversary, it will host several special events throughout the remainder of the school year — including a gala organized by a faculty committee and various recognition of alumni — as well as initiating the Timberwolf Fund, a new scholarship dedicated to providing aid for students in need.

Despite the passing of years, and the changes and expansions that followed, the consistency of the school's experience has remained steady.

"My third-grader is having a very similar experience to my sixth-grader, and my first-grader as well. He even has the same teacher that his older brother had," said Sarah Hoffman, parent and current chair of the School Advisory Council. "Even through the changes that we've experienced, there have been few significant impacts from a family and parent perspective. We've had both consistent and excellent experiences over the last seven years."

In her role as chair of the SAC, Hoffman has sought out input from teachers and parents regarding the school's future direction, setting goals for performance standards and encouraging more involvement on the parental side while maintaining and integrating the core values that make the Franciscan School experience so unique.

In spending this year looking back on the progress of the past two decades, the school administration and council has used it as motivation for pursuing and enacting these new goals, keeping one foot planted in foundational values and another pushing ahead to innovative new horizons.

"One of our primary goals for the SAC this year was to offer more opportunities for community service to our students and their families. Our school has historically been incredibly focused on service. However, much of that service is focused on in-classroom experiences and donations," Hoffman said. "This year, we've sought out opportunities to live out our Franciscan identity and mission by going out into the community in a more hands-on way and meeting people face-to-face."

Through this new initiative, the school has gotten involved with a number of local and national organizations, including Note in the Pocket, which packages clothing for students in need in Wake County; Brown Bag Ministry, which packages and services lunch for thousands of people in central North Carolina; and the Ronald McDonald House, a national nonprofit that offers a number of volunteer opportunities to help children with serious illnesses.

Service is one of the three defining pillars of the Franciscan School, along with faith and academics. For Hoffman and the rest of the SAC, they act as a "North Star" for all of the goals and decisions made.

Those pillars also serve as a guiding light for Watson and the diocese, especially as the school is preparing to enter a new state of flux.

"One of the big things that's happening now is the Friars who started our school are withdrawing from the parish, so we're going to get new leadership from the diocese of Raleigh," Watson explained. "It's sad that they're leaving, but they've created a great organization here that we're all proud of. One of the messages of their withdrawal is that they feel that the school's strong enough that they can leave it in a positive situation that can then be taken over by another order or the diocese and continue to flourish."

As the school has changed over the past 20 years, so has the surrounding community and the issues it — and the students in it — face. Moving forward, Watson hopes to see the school, the teachers and the curriculum address these issues, and ensure that all students in the community are heard, no matter their background.

"We want students to be academically successful, but if there are issues coming up, whether it's vaping or other current concerns that we need to address, we want to supply our students with tools and confidence to also deal with those social and peer pressure challenges," Watson said.

As the Franciscan School launches into a new decade on the precipice of new beginnings, Watson and his colleagues are confident that the next 20 years will be just as rich as the previous.