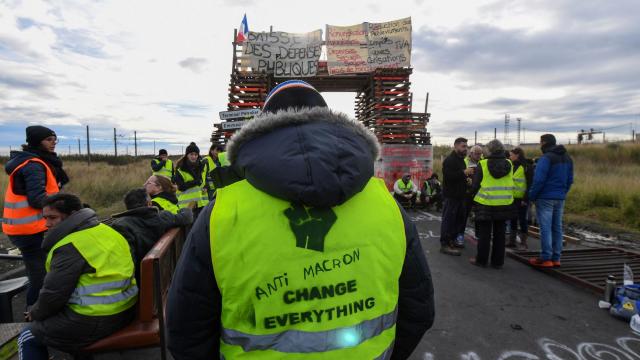 PARIS — Trying to quell its most serious political crisis, the government of President Emmanuel Macron announced on Tuesday that it would suspend the gasoline tax increase that had set off three weeks of increasingly violence protests in Paris and around France by the Yellow Vest movement.

The step was an extraordinary concession by a president who has been criticized as remote and unempathetic, and who has refused to bend to previous protests and plummeting poll numbers as he pushes through changes that he insists are necessary to make France’s economy more competitive.

Whether it was enough to appease the Yellow Vests’ varied complaints about the declining living standards of the French working class was far from clear. But there was little doubt that the gesture was intended as a nod to widespread anger over perceived economic injustice, and to blunt the momentum of a popular revolt that now threatens Macron’s agenda.

“No tax warrants putting the unity of the nation in danger,” said Prime Minister Édouard Philippe after briefing lawmakers in a closed-door meeting in Parliament. “One would have to be deaf and blind not to see or hear the anger,” he said.

The Yellow Vest movement has been named for the roadside safety vests adopted by its protesters as a symbol of their distress and despair. The gas tax increase, which was scheduled to start in January and was equivalent to up to 25 cents a gallon, proved to be a tipping point in a country that already has some of the highest taxes in Europe.

It spurred thousand of protesters into the streets of Paris and other cities, many from small villages and towns where stagnant salaries, steep utilities costs and onerous taxes have squeezed working families.

Largely organized over the social media, the movement is as diffuse as it is distrustful of authority. The government’s announcement of merely a six-month suspension of the gas tax increase — not a scuttling of it — left those who have emerged as Yellow Vest spokesmen wary, at the very least.

“We’re not satisfied, because the French have been struggling for years now,” Benjamin Cauchy, one of the spokesmen, said on BFM TV, a television news channel. “This could have been done weeks ago, and we would have avoided all these problems.”

“Our demands are much bigger than this moratorium,” he added. “They’ve got to stop hitting the wallets of the small earners. We want a better distribution of wealth, salary increases. It’s about the whole baguette, not just the crumbs.”

Lionel Cucchi, a spokesman in Marseille, told BFM TV that protesters were prepared to continue.

“There’s no guarantee it won’t be back in six months,” he said of the gas tax. “There will be more demonstrations. We remain mobilized.”

Along with a suspension of the gas tax increase, the government said it would also delay new vehicle inspection measures and increases in electricity rates that were intended as part of Macron’s plans to transition France toward cleaner energy.

There, working people need cars to get to jobs and conduct their daily lives, unlike many wealthier city dwellers who are unburdened by the gas tax increase and form much of the core of Macron’s support.

Indeed, Macron’s long-term vision for the country has collided sharply with the short-term needs of the working class, many of whom already ridicule Macron — a 40-year-old former banker with no political experience before he was elected — as the president of the rich.

The movement quickly latched onto much wider and deeper discontent with Macron’s fiscal policies, notably his almost immediate reduction of tax on the wealthy, which to many set the tone for Macron’s priorities, especially as he then proceeded to raise taxes on many people’s pensions and on gasoline and diesel fuel.

The third weekend of demonstrations on Saturday turned violent around the country and especially in Paris, where protesters fought running battles with riot police officers, set cars on fire, shattered store windows and attacked banks. The protests, responsible for millions of dollars in property damage and lost tourism revenue, have highlighted a deep socioeconomic split in the country.

On one hand, there are a few prosperous cities, where many residents strongly supported Macron in the 2017 election; on the other, there are the struggling rural areas and small towns of the postindustrial era that either voted for candidates on the extremes or did not vote at all.

It is that second France that has come into the streets against Macron in recent weeks, furious over his perceived tilt toward the wealthy and demanding his resignation. The French president has until now tried to sail above the discontent, deploying lofty abstractions and determined to discourage the French from using cars.

That response has gone down badly in the provinces, with protesters erecting mock presidential palaces at traffic circles and demanding his resignation.

Throughout Paris, where the cost of damage has been estimated at 4 million euros, or $4.5 million, protesters sprayed graffiti that read “Macron resignation” and, on the Arc de Triomphe, “We’ve chopped off heads for less than this.”

Macron inspected the damaged monument on Sunday and had lunch with police forces on Monday, but so far he has not publicly addressed the unrest since his return from the Group of 20 summit meeting in Argentina. Many protesters see his silence as evidence that he is disconnected from the movement’s demands.

Although the protests have been modest in size, they have been unusual in their spontaneous and widespread nature, and have received enormous support on social media and near-constant coverage by the French news media.

The movement has so far failed to name representatives who could negotiate with the government. A meeting between Philippe and moderate members of the Yellow Vests was canceled on Tuesday after two of them said they had received death threats from within their own movement.

The demonstrations spread on Monday to high school students, who blocked more than 100 schools to protest some of the government’s education policies and to show support for the Yellow Vests movement.

Members of Macron’s party have warned against the rigid, solitary governing style of the president, while the far-right and far-left leaders, Marine Le Pen and Jean-Luc Mélenchon, have called for the dissolution of the National Assembly, the lower house of Parliament.

“Emmanuel Macron must question himself,” Daniel Cohn-Bendit, a former Green Party member of the European Parliament and a supporter of the president, said on France Inter radio.

“The moratorium is not enough,” he said of the suspension of the fuel tax. “It’s not a shame to back away.”

Protesters have already argued that the government’s concession would not be enough.

“We have to stop stealing from the pockets of low-income taxpayers,” said Cauchy, one of the Yellow Vests, on BFM TV. He also asked for increases in the minimum wage and pensions.

“We are not going to drop our guard,” he added, calling for another weekend of protests.