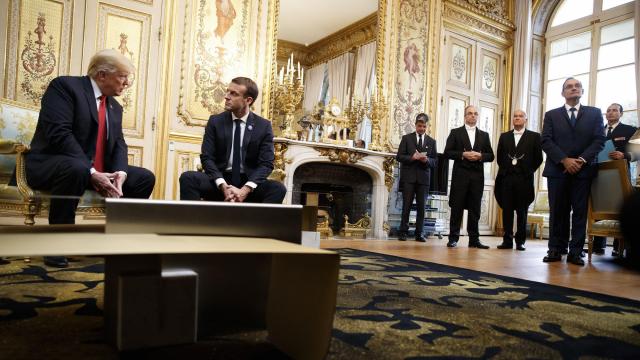 Instead of responding in a tit for tat, a government spokesman said that the messages had lacked “common decency” because they came on the third anniversary of terrorist attacks in and near Paris that left 130 people dead.

The spokesman, Benjamin Griveaux, told reporters in a weekly briefing: “Yesterday was Nov. 13, when we commemorate the murder of 130 citizens three years ago in Paris and St.-Denis. So I will reply in English: Common decency would have been the appropriate thing.”

The attacks by the Islamic State were the most lethal in the country since World War II.

Ceremonies were held across Paris and in St. Denis; some were attended by senior officials like Prime Minister Edouard Philippe.

A more pointed response could come later Wednesday: Macron is scheduled to give a live television interview from the aircraft carrier Charles de Gaulle.

Trump posted the rapid-fire series of messages two days after returning from France, where he had ceremonies hosted by Macron commemorating the 100th anniversary of the end of World War I. Responding in part to the French president’s sharp critique of nationalism, Trump highlighted the French leader’s low approval rating and accused him of trying to “change the subject” to avoid talking about France’s unemployment levels, which have remained close to 10 percent despite economic and labor overhauls.

Trump also seized on previously misreported information about an interview Macron gave last week suggesting that Europe needed its own army to defend itself. In fact, Macron said in the interview that France and Europe had to defend themselves better from cyberattacks originating in Russia, China and even the United States. He spoke later about Europe needing its own army.

Many French people were taken aback by the tone of Trump’s comments — the French newspaper Le Monde called them “violent tweets” — but the government gave no official response on Tuesday.

Macron’s office was quoted on the French network BFMTV as saying that the tweets were for the consumption of Trump’s domestic audience, but officials offered no further comment.

However, some people observed that Trump was simply treating Macron the way he has treated other allies who had hosted him. Among them are Prime Minister Justin Trudeau of Canada, whom Trump derided just after the Group of 7 summit meeting as “very dishonest and weak” and making “false statements.”

He has also expressed negative sentiments toward Chancellor Angela Merkel of Germany and Prime Minister Theresa May of Britain.